Two things the indie gaming community thrives on are experimentation and nostalgia. Some developers push their concepts so far the resulting experience is unlike anything we've ever seen. It may be fun, it may be frustrating, but we love it for the boundless innovation. Other developers take classic concepts and reinvent them for the modern player, resurrecting proven gaming mechanics for everyone to enjoy once again. The selection of games below illustrates both concepts quite well, with a few games blending both nostalgia and experimentation in equal parts. Gotta love indie game creators!

Harmony (Windows, 41.7MB, free) - A great retro-styled first person shooter made by Thomas van der Velden using the ZDoom game engine. Arm yourself with weapons to take out enemies as you work your way through almost a dozen massive areas, collecting passkeys and slowly opening more rooms to explore. Secrets are everywhere in this game, so keep your eyes peeled for anything that looks out of place. You'll also want to visit the options menu to config the controls to your liking. Eight years in the making (wow), the game is packed with original graphics, music, and level designs. Monsters were even molded from clay figures! An impressive accomplishment that's especially awesome for us gamers who grew up with the likes of Doom and Duke Nukem! 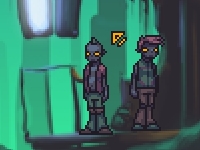 Featherweight (Windows, 15MB, free) - Another bite-sized release from adventure game creator Ben Chandler. You play as Thadd, a scout for a rebel group fighting against not-so-nice robots. One of your fellow non-robots has been captured by the machines, and he sets out to rescue her. The game is set up like most adventure games with a point-and-click interface, and any shortcomings in the puzzles or story are minimized because the game is so short. It's an excellent way to get a casual taste of adventuring without settling in for a marathon gaming session. Also check out some of Ben's other adventure games: Awakener, Heed, and Annie Android.

Dungeon (Windows, 3.5MB, free) (direct download) - A tough, minimalist platform game created by indie stars cactus and Mr. Podunkian. Run through the green dungeon, avoiding spikes, enemies, and falling into that flowing pool of lava (who keeps lava in their castle, anyway?). A story is pieced together at the top of the screen as you move through each area. Be ready to die multiple times in this game, but fortunately you respawn only a few screens back, so frustration never really kicks in. 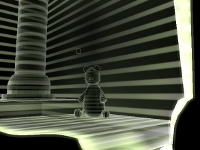 Devil's Tuning Fork (Windows, 42.9MB, free) - Created by a group of DePaul University students, Devil's Tuning Fork is an experimental design that plays on your sense of visual space and sound. Trapped in an illusory world, you play a child who mysteriously falls into a coma. Other children have suffered the same fate, and as you wander around the pitch black world you must collect stuffed animals to help set them free. Using a tuning fork, you can emit sound waves to temporarily see your surroundings. Different kinds of sound waves can be used to see different things, all shown with a gorgeous water-like flowing motion. The controls are a little sticky, and sometimes it gets annoying being immersed in a completely dark space, but the atmosphere of intrigue is intense and you'll be compelled to see the game through.

I played Dungeon when it was released as 1.0 a week or so ago. You really have to start by playing 1.0, read the forum thread about it on TIGsource, and then play 2.0 to get the full effect.

Even if you just play 2.0 first and only (v2.0 is what is linked here), it's a fun game in its own right, and the titles as you go along make what would otherwise be a pretty plain platformer into a short but amusing adventure. This is a good example of how a tiny little touch like that can make a game significantly better.

SirNiko: I figured linking to the original version and such would be too confusing. :-) You're, right, though, that the epic of the game's releases is what makes it really compelling. I started with 1.0 myself!

I can't believe you mentioned Dungeon and didn't mention the follow-up, Clarity. It should be at the site where you get the original Dungeon.

I won't spoil anything, but I will say that everyone's experience is different with Dungeon.
My number was 2.

> who keeps lava in their castle, anyway?

Anyone who plays Dwarf Fortress, obviously!

Devils Tuning Fork is awesome! If the brightness changes were a bit less dramatic to the eye, I would have even less to complain about.

The game they are linking to IS Clarity(Dungeon 2.0). The only place they link to the original Dungeon is in the comments here.

For some reason, Featherweight bluescreened my XP machine running on bootcamp. Not sure what did it, just made the computer restart after I tried to open the .exe

I so wish I could play DTF, it sounds like such a brilliant game. Alas, it doesn't start on my machine - apparently my lowly X1600 isn't good enough for it. It just quickly opens a window and then vanishes.
May be worth mentioning by that one that the "minimum requirements" as mentioned in the Readme are an NVidia 7600GT or an ATI Radeon HD 3650. Which kinda sucks to be honest, like I say it looks like a really intriguing concept for a game.

I have a Geforce Go 7700. This card has ShaderModel 3.0. But the game doesn't start with the a window "you need a graphics card with shadermodel 3.0" .. very ugly. I hope the rest of the game is programmed in a better way.

I think Clarity is supposed to be a sequel, but Dungeon v 2.0 is the same game as Dungeon, just with bugfixes and slower-moving enemies. Making rooms like the bat tango possible for me. However, it does not fix my problem with the leap of faith room. It seems like there's no way to get safely off the middle platform. Help?

I'm getting the "ShaderModel 3.0" problem as well...I think it should just really let us PLAY...not tell us that we might get a few problems and that in order to play we need to splash out on a new graphics card with some weird gizmo or another that we aren't going to need for anything else...

I played Dungeon, and after finishing it in about 10 minutes, found it to be just average. But then I read the forum thread, and my opinion changed completely. That was a really clever stunt they pulled there!

Version 1.0 was designed with bugs on purpose. The bugs you experience are randomized, so for you the bats are too fast, but for another player than might be working properly, but a jump in another map is impossible. So, being unable to complete 1.0 is normal.

Clarity is not a sequel, but it reveals that the bugs were done purposely to confuse players on the forum. It also reveals the debug code that lets you see all the different "bugs".

Version 2.0 is the "no bug" version of the game unless you put in the debug code and switch it to one of the bugged versions.

You need to read the linked thread in its entirety to understand what was happening.

Believe it or not, I'm stuck in the very beginning of Featherweight. I've got the tire tube and the taser cartridge and no way how to continue

There's something you need up in the tower. :)

Yeah, that first guest that commented here was me from a different browser. But that doesn't matter. What does is that I'm a bit farther in Featherweight and I can't get past

the first sentry guard. I've stuck the rag I found under a sheet of tin but it won't let me do anything else

And the second guest that commented here was me, though still in this browser.

As for getting past where you are:

You should simple be able to click on the sign when the guard has turned the other way. If you've placed the rag underneath the tin Thadd should walk across

Incidentally, if you keep getting stuck and really don't want to wait for hints, there is a walkthrough here :)

Sorry this is a really late reply, I sort of just stumbled across this post but the Shader Model 3.0 issue has been fixed in version 1.21. Head over to devilstuningfork.com to check it out.