Alternate title for this edition of Weekend Download: The Balloon Bros. Return of the Attack of the Wrath of the Download: Episode 2 Part 4 - Tetripongfetusausable's Revenge. 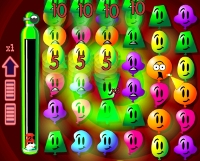 The Balloon Bros Tumble-Top Sideshow Spectacular! (Windows, 20MB, free) - Here's something you don't see every day: a match-3 that's actually worth playing! From Charlie Dog Games, creator of the word game Cuba Letra, comes a whimsical take on the familiar genre. Remember how Bejeweled Twist allowed you to rotate gems to make matches? Balloon Bros goes to the next level and lets you rotate the entire playing field! Click balloons to pop them, creating a space that other balloons float up to fill. To create matches, simply make it so three or more like-colored balloons meet. Rotating the screen changes which balloons move where, giving you a ton of freedom in creating strategies and building up chain reactions. A very well-made game that's unique, charming, and great for an afternoon of gaming!

Au Sable (Windows, 8.83MB, free) - A rare game that isn't gross-out shock-value scary but is genuinely disturbing, Au Sable by Amon26 is a dark platform adventure with a focus on setting and mood. Discussing much more of the game would spoil it, but suffice to say, you'll get more than a chill or two experiencing this frightening game. And it's all accomplished with chunky pixel art and a drab palette of white, black, red, and a whole lot of gray. Fantastic work, but keep the kids in another room for this one.

Fetus (Windows, 2.9MB, free) - A clever little puzzle platformer that plays with your sense of gravity and continuity. Remember old arcade games (especially Kid Icarus and Pac-Man) where you could walk off the edge of the screen and appear on the other side? Fetus makes heavy use of this to create maze levels wrapped around themselves, forcing you to rethink your sense of space and direction. A nice, cool visual presentation sets the mood, and the slow, confining controls really draw the blanket of mystery around you. Later levels crank up the difficulty, so be ready with that [R] key to restart the level.

Tetripong (Windows, 2.2MB, free) - I'll give you 18 guesses to figure out what this game is about! Combining Tetris and Pong, Tetripong pits you and your block stacking skills against the bouncing ball of destruction. As the Pong ball ricochets around the screen, your job is to make as many Tetris lines as you can. And yes, it's as wild as it sounds.

Au Sable looks so cool, but the link is dead! Any help?

The link works fine for me, Tagonte. Here's a direct link to the file download, just in case:
http://willhostforfood.com/?Action=download&fileid=91437

The link worked for me, try it now.

Thanks for the direct download link. The link provided in the article links to a forum, which is down as far as my browser is concerned. However, now the game reports having fatal errors, and forces me to abort past the first (opening) screen.

Au Sable was excellent. It is spooky though, but it's cool if your into that kinda thing.

I clicked the link to download Au Sable but the site just displayed this message:

"This file doesn't seem to exist! It might have been deleted."

I am really interested in Au Sable, but Will Host For Food (where the dl link is), is apparently down for good all of the sudden, and I can not find any mirrors for Au Sable whatsoever by means of Google. It would be really awesome of somebody to put this on mediafire or rapidshare or something, because not only is WHFF down, but so are the FORUMS this article links to (for now), and when they were up, the creator had just said she would be gone for a while, so she might not even know. So if someone just wanted to temporarily host the RAR or the installer or whatever long enough for the creator to host it elsewhere, that would be really awesome for me and anyone else still trying to play this game. Thanks to anyone that reads this, I will watch this page.

The forums it links to are up again, unfortunately still no new download link. They are working on it I believe so if you go to the forums linked above and go to the last page, you will be able to check up on Au Sable. Hopefully if/when they get it up again someone will cross post over here :)

Au Sable is easily one of the most horrifying things I've ever seen in my life. Excellent work, designer, but... I do kinda wish it wasn't.