This special edition of Weekend Download highlights two games that are a bit less accessible due to their large download size and lack of a playable demo. We feel they deserve some attention since each one pushes the envelope by delivering an immersive gaming experience that's both fun and engaging. We've spent a lot of time with them and are ready to sing praise from the roof (in the form of short mini-reviews), so read on to see if one could be your next slice of delicious gaming pie. 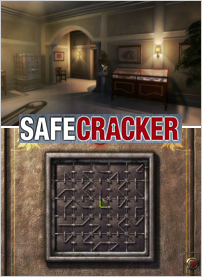 Safecracker (Windows, 316MB, full version) - Casual puzzle game, meet a Myst-like adventure. You play the role of an expert safecracker journeying through the gorgeously rendered Adams' mansion searching for clues to find the late master's will. Take in the scenery with a free-looking point of view and click to move through rooms and engage locked safes. Puzzles are brilliantly conceived and vary from safe to safe, ranging from simple tile-shuffling to more complex number/letter locks. To top it off, Safecracker is a gorgeous game with fluid controls and a deep atmosphere of mystery that constantly begs you to forge ahead to the next safe.

The overall experience of Safecracker is a bit sedated and cerebral, almost like a playable episode of Masterpiece Theater (with cool, fun puzzles). The production values are enormously high and include top-notch voice acting, a rarity in any video game. Safecracker's 35 puzzles will keep you busy for some time, and the difficulty level will stump you more than once. You'll need a little persistence to push through some of the safes, but at the end of the day it's a unique and thrilling game well worth getting your brain in a twist over. 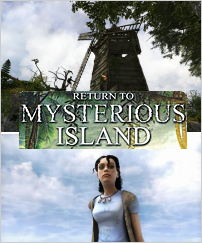 Return to Mysterious Island (Windows, 913MB, full version) - Based on Jules Verne's novel The Mysterious Island, this first person adventure takes a few pages from the Myst book of game design and drenches it in a thick story filled with twists and turns. You play the role of Mina, a sailor stranded on a tropical island who discovers remnants of an ancient civilization scattered throughout the jungle. A mysterious figure seems to be haunting her and Mina suspects it to be the famous Captain Nemo. Journey through the beautifully rendered beaches, cliffs, jungles and more in search of the Nautilus as you dig deeper into the island's history to uncover its secrets.

The core gameplay in Return to Mysterious Island centers around exploration, finding items, and using those items to solve puzzles and progress to new areas. The inventory screen allows you to store and combine items to create tools, such as fashioning a spear by attaching a piece of driftwood to a knife. Puzzles usually have more than one solution, allowing you the freedom to explore and experiment. The free-looking point of view gives you plenty of opportunity to do just that.

It may have been released a few years ago, but a recent resurgence on casual gaming portals has given Return to Mysterious Island a second chance at success it so readily deserves. It's a long and satisfying adventure with all the trappings of a great puzzle game folded into a gorgeous setting with a wonderful story.

Safecracker is one of my alltime favourites. Forget that puzzle-locked safes are a rather stupid idea (it would mean that you can crack a safe only using your logic - not the safest idea to protect value, right? :) The puzzles are good, not always easy but never too hard. One of the few games i was actually able to beat without any kind of walkthru :)

Safecracker is a really amazing game. The puzzles are of various difficulties but never impossible, and it's very enjoyable. I got hooked to it and now that I've finished, I'm looking for a similar title, with lots of puzzles and less story and/or item based puzzles. Any recommendations?

I'm confused. Are these downloadable games, and I just don't get it somehow?

It would appear that a payment is necessary, before I can download them, or am I just too stupid?

The (Windows, 316MB, full version) threw me off, because I assumed (perhaps too much) that it means free full version.
I must have gotten used to it, since most games on JIG are free of charge. My mistake, but could games that need payment be advertised as such? Now I have to clean all the droolery out of my keyboard for nothing. :p

I was kinda wishing that the games would either be free, or that they would have a trial version, as that's what I always look forward too in the weekend download. But I suppose Return to Mysterious Island does deserve a spot in here. I played it once on gametap, and it seemed like a fairly fun, interesting game that had the potential to keep me occupied for hours. Then gametap crashed, so.... I can only offer first impressions.

Anyone know how much these two games cost? I can't see any information about the price on their pages.

So how much do they -cost-? I can't find that info without making an account on that site, which I don't really feel like doing.

The games are $19.99 each, but BigFishGames offers a few "game club" options to knock quite a few dollars off.

f_raze: Yeah, we like to showcase free games that everyone can play, but these two were really good and I just had to spread the word. I wish demos were available!

Two excellent games by The Adventure Company I think. The best games for look-around detail I'd say.

For the cash-deprived among us, I'd like to say a huge thank you for letting us know up front that they don't have demos like normal, so that I didn't read the whole review and get excited about playing. Hehe!

I also have a safecracker CD if anyone would like it.

Does Safecracker have any puzzles that would trip a deaf person up? I'm a little reluctant to shell out for a game that's got a high percentage of puzzles that depend on your being able to hear. :p

does anyone know how to do the