Rise and shine, my little masterminds! Another Wednesday means it's time for another Weekday Escape, and that means it's time to party the way we like it... with inexplicable incarceration, improbable situations, and a whole lot of puzzles! This week! MayMay wants you to lend a fin and that's no fluke, which sounds sort of fishy to me. no1game gives you a theme park attraction for couples a little more engaging than sitting in the dark and trying not to imagine what happened last on that ride seat. And Esklavos proves no good deed goes unpunished, and least not when it comes to brandishing tools at stranded motorists! 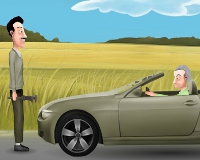 The Irritatis: The Road - Stop to do a good deed, inadvertently terrorize a stranded motorist... hey, we've all been there, am I right? Esklavos' Angelo Irritati has pulled over to indulge in a little postive-karma car repair, and I have to say, I don't know that I blame someone for being a little leery of homebrew engine coolant, especially when its ingredients include whiskey and goose droppings. But hey, maybe things will turn out alright if you help Angelo get everything together so they can all be on their way? 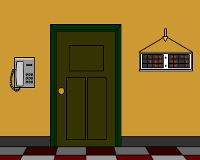 Find the Escape-Men 166: The Escape Mansion - Most amusement park rides aimed at couples are kind of lame, but no1game knows what's up, and you and your boyfriend have to split up to solve the riddles of this theme park mansion together... for two endings, no less! As you might expect, you'll need to find the ten little green men hidden throughout the place to get out, or you can use the phone to quit... ha! Clearly they don't know who they're dealing with! 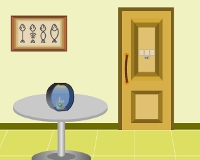 Catch the Fishes - There's something fishy about this cute little escape game by MayMay, but don't worry... no concrete shoes or gangster slang is involved. Instead, you've got a whole lot of codes, and a handful of scales, too, because to get out, you're going to need the help of a fine finn'd friend.

The Irritatis: The Road Walkthrough

Collect all 10 escape men, then use the resulting key to open the front door.

I have seven escape men.

I've found and used all the items except whatever goes next to the "thick escape man". I can see an escape man on the fan, but can't reach him. I have no idea what the clock means.

I found the pole and turned the note over. Nine escape men. Still can't figure out the clock. I think it's something to do with it being almost symmetrical, and I should turn the 7 into a 1, but I can't see how. Or maybe I'm on the wrong track entirely.

About the clock in Escape Men:

Don't just look at the numbers, but the background they're on as well.

The gray boxes, specifically. Have you seen gray boxes anywhere else?

Click the doors in the order dictated by the clock: top right, middle right, bottom right for 1, etc.

Completely wrong about the clock!

In the Irratatis, I got out without using the

you got the whiskey with the clue on teh card...

Ummmmm, I've somehow got 11 escape men and now I can't get out! (Box is blank white when I open the escape men box).

Well I have nine men and can go no farther. All my inventory blocks are grayed out except for the note and my nine men.
yes I found the man on the reverse of the note.

Can not figure out the stack of blocks.

Hammer knocks it down on the third whack every time

I can't get the green man on the fan. I chopped the thick green man in two and collected them on the floor and I stopped the fan, but nothing happens when I click on the green man

you must find a

OK I find the Fish hard to solve. I found a lot of inventory, thanks to forcing things open, but nothing seems to 'tie' together.

I found it very easy to be 'irritating' ;)

I used the card to solve the puzzle of the 16 pins to open the box in the back seat.

Slept on it and all became clear. Any psychologists or neuroscientists among us that can explain the Power of Posting?

In order to ask for help, you formulate the problem in an organized manner in front of you / in your mind, which makes it easier to see the solution. Many programmers actually use a similar technique to debug faulty code, explaining it to an imaginary observer in order to figure out what they're doing wrong. It's sometimes called "rubber duck debugging" because a rubber duck often plays the role of said observer.

Yes, Irritatis is indeed irritating; I have a pile of bits and pieces, but nothing interacts with anything else and I can't seem to do anything. I have

the Stillson wrench, a rock, the sound box, batteries, a coin, a cloth, cleaning spray, and a blank piece of paper. I've

put the batteries in the box and called a goose and a guanaco.

I've done something with the coin, as it seems to have disappeared from my inventory without affecting my inability to do anything or the rest of the inventory. If I turn the sound box to

I can get a rise out of the stranded motorist, but he just sits back down.

Obviously, I am missing a key piece or observation, which will enable the game to go forward. I rage-quit last night, and I'm close to shutting down and going to bed.

You need to irritate the driver, not yourself. :)

Use the soundbox to get the goose to attack the driver; this drives up his irritation level and causes him to drop something (I forget what).

The Irritatis: The Road Walkthrough

Collect all 10 escape men, then use the resulting key to open the front door.