Look, I don't need a camel to tell me that it's Wednesday, because that's when all the good little boys, girls, and others are visited by the Weekday Escape fairy in the middle of the night! If you've been clever, and you know what to do when faced with a locked door, a screwdriver, and a cupcake fan, the fairy leaves you a trio of free escape games to make the middle of the week that much more bearable. This week, no1game's intrepid boy-child is apparently a lot closer to his kindergarten teacher than I was to mine (in her defense, I was a weird kid), Hottategoya takes you to a place that maybe needs to revisit the definition of "cafeteria", and Kumako wants you to make sure you're dressed up the way you like before you go outside. 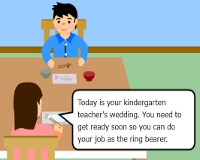 My First Ring Bearer - no1game makes everything cuter, including a job that amounts to "stand here and hold this pillow", when you play a young boy who's trying to get everything on his list ready so he can be the ring bearer for his kindergarten teacher's wedding. Before you can leave, you'll need to get your outfit together by assembling all the pieces hidden around the room... easier said than done with the sheer amount of puzzles this weird family has strewn about their apartment. Remind me never to babysit. 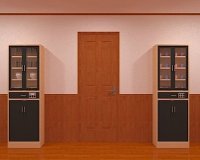 Strange Cafeteria - I'm not exactly the world's pickiest person, but even I might need some 'splanations if you told me we were going to eat at a place with the word "strange" in its name. Hottategoya's title lives up to its name as you turn in circles trying to find your way out of a place that's got a lot of table settings, but nary an actual tureen of mystery meat to be found. Maybe that's an improvement... ? On the other hand, I DO love me some congealed vat of off-brand mac and cheese... decisions, decisions! 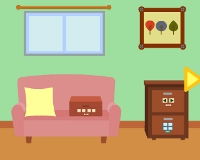 KUMA1 - Look, sometimes cute trumps complex, and Kumako's teddy-tastic escape definitely fits the bill, despite some fiddly clicking. You won't need to bust your brain for this one, as you assemble a pair of outfits for a shy bear that wants to go outside, though virtually every surface in this house has some sort of puzzle lock on it. Sometimes, however, you don't want to break your brain. You want to glue some stuff to some things, and hang some stuff on other stuff, and maybe feel pretty at the end of it.

After you have get all the things, put them on the table, and the table is at the lowest part of the scene with sofa and rabbit.
Bowtie

Get it from the rabbit on the sofa

1. After getting the shirt, look at the mirror
2. key in OPEN into the drawer

1. look at the picture of the arms
2. unlock the window according to the colour of the jacket and the shape of the buttons in the picture

1. after you have unlock the window(for suspenders) open the left window and click to reach outside
2. Get the key
3. open the drawer under the watashi and get the Pliers
4. get a hanger from above the clock
5. click above the door
6. use the cut hanger
7. solve the puzzle under the clock

Dora, I am in agreement with you on the appeal (or lack thereof) of an eating establishment named "Strange .......", but as soon as you enter, the 1st thing they tell you is, "The goal of this game is to escape from this place." I think that's even more of an indicator to me.

I'm stuck though. I figure the clues are readily accessible, but I can't seem to assemble them in my mind for an answer to

Experiment with the relevant code panel. At every step, the panel needs to match one of the sets of silverware in the room. Note that "left-facing knife" and "right-facing knife" are different.

Sonic, very nice! Thank you! There was no way I was going to come up with thinking it was a

Wow, that silverware puzzle in Strange Cafeteria was really cool!

Like Snarfhead, I was trying to get it to fit a single code - but this forced you to think differently from the escape game norm.

Agreed about the silverware puzzle in Strange Cafeteria. It's also

the first puzzle game I can think of where one of the clues is a wordsearch!

Yes, I was thinking the same about the silverware puzzle until I noticed that

the entry panels don't cycle around to the first shape again once you reach the last.

For anyone who's satisfied that they've figured out the logic behind the silverware puzzle, but doesn't want to have to circle the room making notes, here's the correct sequence:

I spent way too much time on the silverware puzzle

trying to figure out which forks and spoons were face down

The picture with three tree

leaf direction of the plant

Box on the sofa
Hint:

Box in the cabinet
Hint:

Behind the "K" from the box on the sofa

Use the glue get from the box in the cabinet to stick the "K" (glue apply on the back) onto the T-shirt (From the left right arrow puzzle), and use the hanger(from the cabinet) to hang the T-shirt near the window

Use the hanger to get the shoes from above the bear

Under the cushion on the sofa

I really REALLY love Hottategoya's games, and Strange Cafe was great! Like others, I enjoyed the silverware puzzle! Biggest hint is that

the symbols do not loop back to the start, once you've cycled through all 4 cutlery symbols, you have to reset.

Strange Cafe: One of the most elegant games I've seen in a while!