Sun's out, Weekday Escape fun's out! That's how that goes, right? Well, it is if you're into free escape games, which I've got an inkling that you are! I mean, the way you started tossing my furniture around looking for "clues" and tried to tape a screwdriver to that rubber duck when you walked in speaks volumes about the type of gamer you are... which is to say, totally my kind. This week! Funky Land serves up a raspberry-coated kitchen escape, no1game makes you go d'awww while rifling through random doo-dads, and SelfDefiant gets all dingy in the spooky asylum du jour. 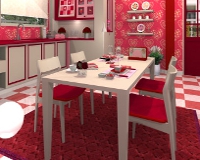 Fruit Kitchens Escape 22: Raspberry Red - What is it about Funky Land games that they always look like the sort of showcases I used to build for my Sims to theoretically live in? (I say "theoretically" because like any good gamer, my attention span never lasted beyond the six hours it took to build and decorate each abode.) In this fruity, fun escape, you've got to find the seven raspberries hidden throughout the room, which may be easier said than done thanks to a little pixel hunting, but hey, when has that ever stood between us and something we want? Especially when that something goes so good reduced and served as a piping hot topping on vanilla ice cream! 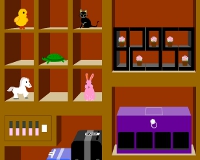 RING - ... alright, no1game, I'm trusting you here, but if I get even a whiff of stringy black haired girls about to crawl jerkily through my monitor, we are so over. Fortunately, the set up for this escape is a lot more awwww than AAAAAA, as you've received a note from your boyfriend, telling you he's hidden a gift that he's too shy to give you himself in a special place. Before you can leave the room, you'll need to solve puzzles and crack codes on a shelf filled with tchotchkes, after which presumably the two of you will travel the world as a daring, brilliant, puzzling solving couple, like Professor Layton, only more nauseatingly sweet. 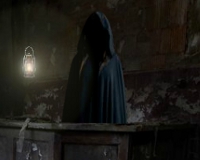 Ghastly Asylum - If I know anything about asylums, they're filled with glowing purple orbs, photogenic dilapidation, and cryptic puzzles... at least, that's what SelfDefiant has taught me, and they probably know what they're talking about by this point! After investigating a creepy abandoned asylum (is there any other kind?), you fell through a weak spot in the floor, and now you need to find a way out. Fellow fraidy-cats, be not a'fear'd, because despite the creepy atmosphere, this game has no spooks with which to spook you, unless you were traumatized by a bunch of colour-coded keyholes when you were younger.

Fruit Kitchens was nice and easy as usual.
Ring was quite simple as well. Only a couple of puzzles to solve.

Now on to Ghastly Asylum

Stuck on a puzzle in RING.

I cannot parse the square pad puzzle. I figure it has something to do with the nine nooks with animals in them, but neither making the squares with animals black, or the empty squares black, works. I can't find a way to figure out if there's a certain order to push either, and some of my other ideas such as marking where the drawers on the whole shelf are didn't work. I've used all the items I've found, and there are only two slots left. One for the R panel that I assume is inside the safe, and what I presume is the ring itself. I have no idea what else there is to look for that I'm not getting.

They have more than two states.

Huh. So my shy boyfriend has me locked in a room from which I can only escape if I can figure out his clever clues which he's somehow arranged while I was...erm...unconscious, I guess?

This seems less Ring and more Saw. And now I'm afraid to put my hand in any of those drawers.

I just can´t move the lamp as I want, only keeps pointing left and then (I don't know how) change to center. I see a video walkthrough where they move free the ligth of the lamp. I try opening the game in IE10 but was the same. Or I am missing something? (Sorry for my bad english).

Peter Of The Norse

I saw the same thing. Also, according to the walkthrough, there's a clue on the sheet music that's too small to read. Life's too short to tray and deal with that.

Where is the item for collecting orbs? I can't pick up the water bottle nor the tool chest in the cafeteria. I've looked high and low and I don't see any container for orbs.

You need to find

something that will turn a rusted shut valve

Escape game in VIet nam is more popular in the youth

Help in Ghastly Asylum - I have a silver key, but don't know where to use it. I have found both a gold and purple locked door, but do not have keys to them. Any hints, people?

I think for the silver key,

if you turn left in one corridor, there's a door surrounded by red velvet curtains?

Just keep walking around, pressing all the arrows. I think it's up the stairs, left at the spider-filled power box?

In the words of a wise woman, "aint nobody got time for dat".

I had the same issue with the lantern, left or 'normal' lighting.

Those games should just give us the orb-collector at the beginning, to save pointless doubling back. And maybe some kind of orb number indicator, instead of just a bar.

Thanks, Catherine - I never noticed that hand pointing!

Ghastly Asylum was a bit exhausting. Clunky navigation - I wish the map/transport crystal were just part of the game.

and am completely lost on the number puzzles.

Ghastly Asylum: There weren't any errors, and that's the only good thing I have to say about it.

The main problem I have is the view under the sink, where there seems to be nothing clickable. The drawer doesn't open - perhaps I need to find a handle?

@JCS
I don't remember where the keys were found but the clues to the number puzzles are as follows:

On the music sheet, click on the small line of type near the top right. Two dates are given to add up to the code.

On the back of the clipboard, there are 6 numbers with lines connecting them to give the order of the code.

You do have to make sure you thoroughly examine items in Fruit Kitchen.