Ladies and gentlemen, welcome to the (re-) launch of Weekday Escape, the greatest JIG feature of our time. Well, obviously, except for your features, Mr. Tricky, which are also...very good. And, all JIG crew, yours aren't...that bad, either. Anyway, what I mean is, welcome and thank you for coming to the launch of one of the top thirty JayIsGames features of our time. I hope you will enjoy it, and the bit of it that is a bit different than normal, as well. Every week this time, this space, we'll present escape games that are, we think you'll find, quite enjoyable. So, where to begin? 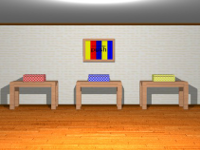 Escape from the Room of Three Boxes - When introducing a game, it's a good idea to include thoughtful details. Yomino Kagura does just that with this titularly self-explanatory game. Here, obviously, open three boxes and then escape. The changing cursor compliments photo-realistic graphics and a clean design for an intuitive experience. Despite most the narrative being Japanese, the rest is so familiar, success will be quick for those fluent in puzzle. 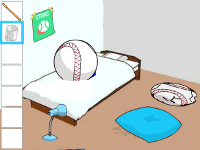 Escape Game of Baseball Boy 2014 - At times least expected, odd things turn up. Such as this Minoto creation, a top example. The navigational rules are not spelled out but apparently stealing bases is not allowed. Instead, solve a puzzle or two and then you can move on to the next view where a tad more help is given. While fully understanding Minoto's logic could be hard to do, if you're enjoying yourself, does it matter? 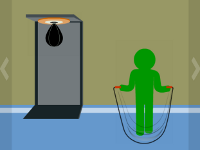 Find the Escape-Men 79: The Boxer - If you have trouble deciding, try making a list. Here's why this escape from No1 Game is a worthy play. Number one, in order to succeed, you must find ten little green men; the finding men bit is a very good start. Two, it has a humorous story and who doesn't like to laugh? Well, except the pixel hunt parts are rather poor since you must click places that are not too obvious. Two out of three is still nice, though.

Welp, it seems I need something to shoot with. :(

You probably already have something...

it doesn't have to be round.

I wonder if that's Joe from Legend of Success Joe...

@ThemePark: You may already have something that you're overlooking, man.

What, oh please, what, am I supposed to do with the

eggs in the cup

Also, will punching that black bag ever get me anywhere?!

Stuck in the Minoto game, oddly enough right where the screenshot shows. Can't figure out what to click on next. Hoping for the good ol' POP!

Did you look everywhere yet, such as...

Under the bed? Or, behind the headboard?

Aha...nope, I had missed one of the places you listed. Got it now, thanks!

Finished all but the Room's Room game, in which I've only been able to solve one puzzle so far.

Never mind, just finished that one too. All escape games fun and not too difficult today!

Where was I supposed to use the stick?

You use the stick to get something under the bed.

The FIRST game. There's no bed in that one.

Also, I guess there are two endings to the baseball escape:

depending on whether you get the phone out of the safe or not.

Um, for the Escape Man game I have

8 escape men, a penlight, the boxing gloves, and a disguise

And now I am stuck. What do I do next?

Have you tried using the boxing gloves?

On the large punching bag....keep punching until it breaks open.

Look under the boxing ring...use the penlight to find things in the darkness under there.

For Escape from the Room of Three Boxes...

Have you tried using it on places where you can't reach...

...maybe like something higher than most everything else in the room?

I don't know what other thread to put this in, so I'll put it here until I'm directed elsewhere.

Speaking of JayIsGames features, I really enjoyed You Are Games: Letters In Boxes when it was a thing. Steve came up with awesome puzzles and there was real community in the comments threads as we all helped each other figure them out. Working out the puzzles was rewarding in its own right and the winner-gets-a-prize element was just icing on the cake.

I don't know what goes on behind the scenes and I don't know what Steve's up to nowadays, but it would be amazing if Letters In Boxes or something akin to it could make a comeback. Once a month would likely be an easier schedule for the puzzle-maker, and there doesn't have to be an actual prize for the winner.

I am stuck in the Escape Men game. I still have

The two puzzles I am flummoxed by are

. Any hints at all would be pounced upon and hugged.

I can see the number "3" in the stitching of the baseball, but can't make out the other numbers. Any suggestions?

Re: Punching bag. There's a clue over where you found the penlight.

I'm stuck with the jumping man and the disguise and slingshot.

thanks thorzdad2, I got the punching bag clue. Now I'm just stuck where you are. *g*

For the last escape man, and the slingshot....

While facing the jump roping escape man, open the slingshot in your inventory, then click on the item box for your collected escape men, and then click in the pouch for the sling shot.

In The Room with Three Boxes, I'm unsure how to

some kind of rectangular screw-on plate

but apparently this is not a cut-the-lady-in-half routine.

I also seem to be missing key information for the

In Escape-Man 79, does anyone know how to find out

the 4-digit code for the box under the table?

thanks, username. I have to remember to check EVERYTHING. And I'm out.


think outside the box. Literally.

cut the chains with the pliers

You can find the pliers....

Where was the penlight? I have it in my inventory but don't remember where I found it...

To the left of the ring.

I have now beaten Baseball Boy and Escape-Men 79. Thanks, elle!

Now to get unstuck from Room's Room. Haven't made much progress there. I did

figure out the rectangular plate, but let's just say

the numbers aren't adding up.

Thanks, elle. I was just curious because I feel like I got out of the room without using that item.

Oh. No I didn't. Ha ha! I must have gone through that one pretty fast.

Still stuck! I'm at a complete loss, still have the disguise, the penlight, and the slingshot. Ai yai yai!

Oh wait! I finally figured out the punching bag!

The poster over the treadmill shows you which side of the punching bag to punch: LRLRRLLLRR

What is the use of the small base ball in that cup after I pour warm orange juice into the cup?

OK (officially pulling out hair) In regards to Escape from the Room of Three Boxes, I look to be almost COMPLETELY finished with all puzzles, but am unable to

open the center, BLUE box on the table. There's nothing to move, push, unscrew, unsnap, slide, or enter a number in to...

i'm stuck at 8 green men, eggs, flashlight (got the 3? items under the ring), and the disguise kit.

can't seem to figure out how to get the guy a drink, but delt with the skipper, the punching bag, and the boxing bag.

After a frustrating start, that last baseball game was really good.

there is wire around the box that needs to be removed

Do you remember where to find the wire cutters? If they're in the

square-triangle-circle table, I've been having a hard time working out the code.

The answers you're looking for are found in...

The back of the metal plate, inside the red-checked box, and inside the drawer.

So, the clues are:

Put them in order as shown on the front of the table:

I had all of those clues, but I was putting them together all wrong. Boy, do I feel stupid!

That baseball game sure is a quirky one... odd to have both pixel-hunting and blatant "Hey! Over here! Click me! Click me!" in the same game.

Found the two endings as Andrew noted above. Did anyone find any more? I found ways to play around with the

but they don't seem to lead anywhere.

@Spike21: Did you figure out about the safe combo? I don't see the "3" you mentioned but as for the baseball I'd guess

you're thinking too small.

I really liked the 3 boxes one. Focus on solving problems/puzzles instead of pixel hunting. I like the green men series, but prefer to have them on the same day as another typical escape game is posted. I really did not care for the baseball one AT ALL. Really confusing on how to move around and with all the question marks and X's...just wasn't fun for me.

I remember playing the original escape game of baseball boy!