Warning: This game contains flashing elements which may trigger photosensitive seizures in people with epilepsy.

Gather your troops and dust off your crown because Ben Olding is back with a new Warlords, Warlords: Epic Conflict! This strategic gem is sure to keep your day busy conquering with ten different races and unlocking new modes to play. While set up to be a sequel to Warlords 2: Rise of the Demons, Epic Conflict is more of an major overhaul, in the best way possible. The gameplay stays the same: select your troops and place them in specific rows on one side of the screen and have them march to the other side, fighting along the way. Fill up the bar at the top by helping your units cross over and off the screen before your enemies do the same. 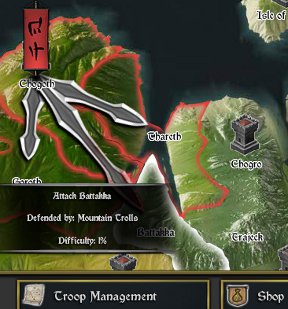 The map has been expanded from its predecessor giving you a greater challenge and more room to strategize. The mouse is needed this time instead of just the keyboard, but the game allows some freedom of choice between the two. This makes placing units much easier and lessens chance of putting down the wrong ones in the wrong place. Your infantry also proves that they have mental capacities as they now can move slightly up or down to face nearby enemies or reach ladders to cross over walls. Additionally, placing one type of unit does not restart the count for all and you can place them as groups instead of singles making it feel much more like an army and less of a smattering of angry men. Races no longer give your army benefits but give you a special ability and start you in a different location on the map. No two games are alike, as when you move, so do the other warlords: fighting each other and trying to claim your territories you've left behind.

Besides all the different races and modes to unlock and the high replay value Epic Conflict is an outstanding game in the aesthetics. Graphics are much smoother, and the atmosphere sucks you right in. The smaller units and distant cries of slaughter makes you feel as if you truly are sitting on the mountainside, ordering your troops forward. Its easy to lose an hour or two to this game. Thankfully it comes with a multiplayer option so you won't lose your socializing time.

Yay! This game was an old favourite of mine! This one looks pretty good, too, with the new, shiny graphics and music (and pleasantly morbid battle sound effects). Also, special powers.
The castle-siege bits are interesting, too, although I didn't really follow a different strategy when fighting, just sent the men a-slaughtering. Sometimes I found the graphics a little bit too detailed and the figures too tiny - I had some trouble seeing them properly, which was a drawback when I needed to think quickly about which units to send out to the field. Nevertheless, happy to see this coming out!

Also: multiple units and mouse control are both huge improvements, they make the gameplay much easier.
And finally, a tiny plot hole: I played as the undead, who, as far as I know, should have absolutely no reason to go to war for food. Or did they all starve to death and now they are risen to avenge themselves?

I was much happier with the controls. I played this one first before going back to the older one and struggled greatly with only using the keyboard.

and you're right! The undead don't eat. Minor overlook or something is more sinister brewing?
In any case, you bringing this to light literally made me laugh out loud and then do some wondering of my own.