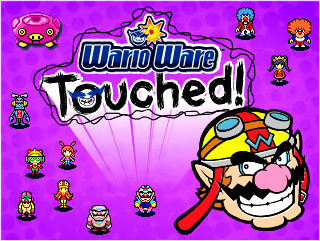 I have been playing with my Nintendo DS a lot lately, especially since Wario Ware: Touched! came out about two weeks ago. The new version of the insanely addictive, genre-busting original is just as frantic and fun, though it's a tad on the short side.

Touched! begins similar to the way the first one did: a silly little story featuring Wario introduces how he is going to make double the money selling a new double-screened game device he found. But you don't play the Wario Ware games for a rich interactive narrative experience. It's all about the gameplay, and this iteration of the franchise does not disappoint in that department.

The game features about 200 mini-games, most of them new, and all take advantage of the special features of the innovative, two-screened handheld. There are 9 sections of games, comprised of 21 games each, that are represented by characters from the other Wario games. You start off with just one selectable character, Wario, and you must complete his stage of games, including a boss stage, before the next character will appear.

Most sections open up with a short story introduction and a sample game demonstrating the theme for the stage. For example, the first stage features Wario visiting his dentist due to a run-in with his sweet tooth. The display will show the inside of his mouth with 3 cavities, and you simply poke each one to remove it. Therefore, the first level consists of games that primarily use poking actions on the touch screen. Other sections include actions such as dragging, rubbing, drawing or scribbling, blowing into the mic and, of course, playing old-school NES games.

The Wario Ware mini-games concept translates exceptionally well to the DS hardware, so much so that it is feels like the DS was made for this game, not the other way around. The game feels and plays exactly like the original in the series, and yet it seems fresh and new, nicely showcasing the new gameplay interfaces of the DS. If there is a downside to the game it would be that it is very easy to complete, and it's over way too fast too soon. The Album feature in which you can play any of the games independently adds some additional replay, but not much since playing a single mini-game for any length of time tends to put me to sleep.

Still, all things considered, Wario Ware: Touched! is a must-have addition to your DS library, and one that you won't be sorry you bought. Also, check out the official Touched! website. Click.

wow this game is nice good find! been using youre site a lot lately thanks for all the fun!