War of Eclipse is a one button arcade and role playing game from Game Stew that has a distinctly retro look and feel. A mysterious dark explosion destroyed half the population, bringing with it a race of evil aliens. The people fled in terror, taking refuge underground where they now spend their days gathering resources and hoping to survive for another day. But now, just when you get your new ship, the aliens attack. Now you've got to defend humanity the only way you know how: with steampunk ships that fire lasers! 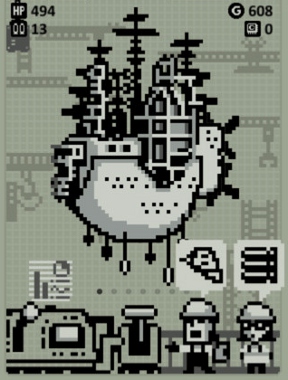 War of Eclipse takes a simple approach to one on one combat, alternating between turn-based fights and quiet time spent at the shop upgrading the ship's abilities, performing repairs, and gathering information. Once you think you're ready to go, head out to battle a foe and get ready to initialize your superb hand-eye reflexes. All you have to do is watch the moving arrow at the bottom of the screen and tap when it's in the gray areas to launch an attack. Stop in the darker area to perform a stronger attack, then sit back and watch the action. And if you happen to miss? Well, you really don't want to miss when you're fighting a massive alien being intent on feeding off of your corpse, do you?

Defeating enemies earns you gold, and gold can be used to upgrade your ship's various abilities, add additional equipment, or even purchase new vessels to fly into combat. There are also optional in-app purchases to speed up gold gathering. The whole system is satisfyingly deep with plenty of choices to make and a lot of great stuff to find. The battles feel like an epic showdown from Dragon Ball Z. Only faster. War of Eclipse is a frighteningly simple game to pick up and play, but just as frightening is how quickly you'll get sucked into the game and how long its hold will last. A wonderful, wonderful game to keep around for quick battles and long-term ship upgrading success!