Eyes in the back of your head? Pfft. Amateurs. Wandering Eyes' little green protagonist can make a whole new set of eyeballs pop up anywhere he pleases in the world, meaning he can have eyes just about wherever he likes. What do you say to THAT, huh? If you say, "Well gee, that sounds like a neat idea for a puzzle game," then Anton Antsiferov and Darya Gavrilova agreed. Now this ocular alien must find his way home, and, in that curious way of puzzle games, only his eyeball generation skills can save him! Control the alien with the [arrow] keys or [WASD], and click on anything that's not nailed down to possess it with your eponymous wandering eyes... wandering feet included free of charge. Walk crates on top of buttons instead of pushing them there, load cannons with ambulatory cannonballs, hitch rides on top of safes, and make your way to the sweet freedom of the teleporter! And beneath its cheery exterior, Wandering Eyes has enough wacky gimmicks and simple-but-sweet levels to please puzzlers of all ages. 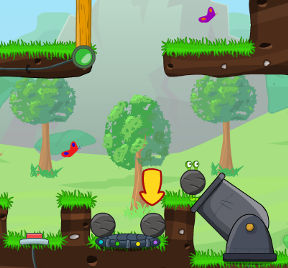 With its astonishingly bright and happy colors and setting, Wandering Eyes definitely feels like it's targeting a somewhat younger audience. This is backed up by the game's length... most of the stages are fairly short, and there are only 20 of those in total. But despite this, the game never threatens to become insultingly simple. In fact, it manages to have a decent amount of depth in the way that every object you can possess has different properties. It's not just things like balls roll or that safes are heavier than crates, you'll walk at different speeds and jump at different heights depending on what you're controlling. These different abilities feel natural and intuitive, so the game needs very little tutorial to explain itself. The game even kindly shows what objects switches and buttons are wired to, cutting down on unnecessary experimentation. And while none of the solutions are especially complicated, a number of them do have that ever-so-desirable "Whee!" factor; who doesn't love springboarding off see-saws or riding on powerful air vents? The physics are a little slippery and jittery, but although it makes a few jumps feel a little odd, it's usually not obstructive and usually won't stop you from completing levels. While the platforming elements are a little rough, all the puzzle parts work just as they should. Although it will only really challenge younger players, Wandering Eyes is a sunshiney treat that mixes things up enough to keep older fans interested.

Only issue with this game, there's no kind of "Well done" or "congratulations!" screen when you've finished all the levels.

And you might not release ther are 3 butterflies you can collect on each level as well.

Not that there's any reward for that either.

It's a good, playable little game.
Shame about the lack of any proper completion screen.