Walkerman
Prologue: The Thing in the Weald

While the first "real" installment of this episodic indie visual novel adventure isn't due out until November following a successful Kickstarter campaign, Scalemail delivers a chilling, intriguing taste with their free release of Walkerman Prologue: The Thing in the Weald. The story stars Jorgen, a young man just beginning his career as a walkerman... the people also known as "pouchers" who brave the outside when the sun goes down and use the items they collect to combat the beings that come out to roam... "supernatural ratcatchers", Jorgen says. Unlike your typical sellsword, walkermen don't necessarily rely on might and swordplay to win, instead figuring out and intuiting the strange rules that govern the creatures they hunt, gathering items with unique and even abstract properties to help. Pouchers might be a necessity, but people hate hiring them for the dark things they represent and remind others of, not to mention the rumours and speculation swirling around them. As the prologue opens, Jorgen is lost making his journey to Midgard, leaving his father and their life in their remote hut behind. But Jorgen's resolve in his new life, and his abilities, are about to be tested, as he gets his first one-on-one encounter with the very things he's going to be spending his life fighting against... if he doesn't lose it first, here in the dark of the trees. Almost teasingly short but beautifully illustrated and well-written, The Thing in the Weald is a tantalizing blend of atmospheric and unsettling storytelling and adventure that I can't wait to see more of. Note that while the prologue is free, estimated at "1/12th" the length of a proper installment, future episodes will cost money. 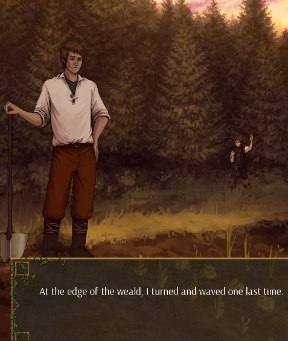 For the most part, Walkerman plays like your standard visual novel... just click choices to make them when they appear, use your scroll wheel to back up through text, and right-click to open the save/load menu. The key difference is the red gem to the right of the text window that opens your inventory when clicked, allowing you to view your items and, in confrontation, make use of the tools of your trade. Walkerman's "combat" is, thus far, about figuring out what rules govern the creatures advancing on you, and trying to exploit them so as to render the thing vulnerable. These rules have a very folk legend feel to them, such as, say, a creature that must always face anything burnt, so the items you're carrying tend to be strange. A handful of bones might offer several potential rules, both being from an unknown bird, as well as being, well, bones, and you'll need to figure out what might be useful against whatever you're facing by gathering clues or experimenting. Sound weird? Well, it is, but it works. Walkerman's focus on the obscure "laws" that often govern supernatural legends, such as vampires and garlic or running water, add an appealing bit of dark mysticism and an experimental workman-like quality to the walkerman profession... which is, it must be said, sort of like a less burly take on the Witchers, though I daresay they've hardly got the first word on distrusted monster hunters.

Of course, the prologue is very short, as mentioned, and almost serves more as a tutorial than anything else. Jorgen's father explains the basics of walkermanery, you learn the mechanics, and then you put them to use. The proper "fight" in the game shows of a little more of the way you'll actually need to think and puzzle out how to use not only the things you find, but your surroundings. Still, it does a good job of establishing a lot of the setting and concept, as you learn the reason why Jorgen and his father are so isolated, and the stage is set for the troubled political climate of Midgard when Jorgen finally arrives. Scalemail has set everything up for a compellingly creepy, complex visual novel series that could wind up being a hit, and if the prologue catches your attention like it did mine, make sure you check out the official website for more information.