I don't know about you, but the minute mysterious, unwashable numbers appeared on my apartment wall, I would be getting my security deposit back from the landlord. Apparently the protagonist of rest.less games' free indie horror game Wait is a far more understanding tenant than I. He's been living with the digits for a long time now, and even posting about them on messages boards ranging from the mathematical to the supernatural have yielded no clues. One night everything changes, however. It starts with an oil lamp, and as the nights pass, it turns far darker, and far stranger, than he could have suspected. So... like I said, security deposit, yeah? Use the [arrow] keys to move and [spacebar] to interact, with [ESC] to close menus. You can only save when the game offers it, so make sure you always take the chance! Wait is inspired by both H.P. Lovecraft and the Silent Hill series, so expect things to move at a slow simmer rather than a roiling boil. As the days go by, when the lights go out, the apartment seems to... change... so make sure you examine even the things you've previously looked at more than once as the game progresses. 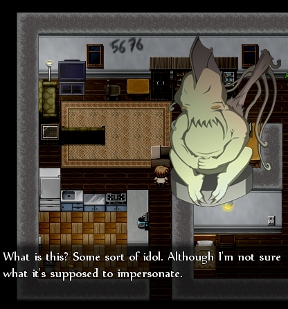 Wait was created for the 2014 Indie Game Maker Contest, and though it's an impressive piece of work in many ways, you can still see the strain of its constraints peeping through here and there. The most obvious place is in the story, which is deliciously creepy and intriguing right away, but suffers from a few plot holes that explanations throughout that feel like afterthoughts can't quite explain away. Our hero is curiously flippant about the bizarre things that he encounters, and it makes the way he gamely trudges off to work each day all the more surreal. What does he talk about at the watercooler? "Hey guys, did you catch last night's episode of Master Chef? I couldn't watch it because I was being pursued by interdimensional hallucinations in a nightmare land. ... what? Clean out my desk?" Despite that, however, Wait is still a really clever bit of horror fiction, with some amazingly effective scares and surreal scenes thanks to the developer knowing when to go big, and when to keep things subtle. For the most part, Wait is rigidly linear, with only a few real puzzles, but the design is absolutely fantastic, and considering its limited development time, it's also remarkably polished. The ending feels a little anticlimatic, but the journey itself is more than worth it for horror fans looking for something short and wonderfully creepy.

Any way to make this full screen? It seems so tiny.

So far I am super intrigued!

I cannot help but suspect that

there's a sixth idol in the combination lock safe in the area near the end,

but I'll be darned if I can figure it out.

It feels so scripted. I wish there was an alternate ending, some things you could have checked out that could affect where the ending goes.

Unless there was one and I missed it?

Revvy, if you mean the locked refrigerator in the apartment with the guys that move when you activate your light.

All that contained was a bunch of blood samples with names attached to them. You can find the combination in a box in the room where you get the final(?) idol. Search the box twice.

I cannot open the first locked chest with the 4 blocks that say sin, regret, deprivation, and departure. I am pretty sure i have tried all possible combinations. Could someone please tell me the order?

This combination worked for me:

It might be in my head, but I swear I tried that same code before and it didn't work.

I went around and reread all the pages tacked up, which I think were supposed to each represent one of the four items, and then the combo worked. Maybe the combination changes to the order in which you read them? I can't say that for certain, though. Maybe I'll replay and try it, since I apparently missed things in my first playthrough!

After playing through a second time:

The code I posted above worked even without reading all the pieces of paper. So it was just a matter of getting the right code, no other tricks to it.

The only "alternate ending" I found was:

The night where you wake up and find your layout is all different, and a red idol disappears between a bunch of candles. A creature appears and you have to run away from it. If you run into it, you get a Game Over.

Not sure there are any other game overs. Maybe you could get stuck somehow with all those mini-creatures towards the end but I was too creeped out to try.

I felt like this game was really cool but could use some more depth. The ending was all right, at least it was fitting, but it could have used a bit more substance as well. And that's my two cents!

Huh, I see. I still feel like either I'm missing a great deal, or the game wasn't quite finished. An awfully great deal seems outright unexplained.

All that talk of a hypothetical sixth component seems to go exactly nowhere. Unless that's supposed to be the contract-signer?

At least it's got that enticing element of leaving enough dangling threads that it seems like some of the ambiguity could be resolved with more careful play and/or analysis, rather than just immediately leaving me to conclude the creator never bothered to think of an answer. Maybe I'll go through again and spam-examine everything I can manage or try to go off-rails a bit.

After opening the first chest with 4 blocks that say sin, regret, deprivation, and departure and take an idol, i stuck there.Please someone tell me what to đo next???

Actually on the game´s download page there are a few screenshots and the last one says 5677.. I thought it has started counting down from 5676 so maybe that's after the sixth idol? Is there such a thing? There must be something I'm missing!

Hey everyone,
I'm the game designer from rest.less Games and the one responsible for Wait. I'm quite excited to find this review here with all its comments.
Since so many of you guys seemed to have questions I will go through every comment and try to give an answer.

@IlanIvasko
Well, although we dropped some secrets and gimmicks here and there, the number 5677 is really just from an old version, as is the screenshot. Sorry, no secret there. But it's quite interesting that you've noticed. Good job.

Yes, it is supposed to be the contract signer. He represents a sixth aspect, which is free will.


You are correct with your assumption. We hid a lot of info about the plot in the game, which will not necessarily be discovered if you just play straight through the story.

@isengrin
We had considered alternate endings, but it just didn't feel right. We could have made it work, but it would have taken too much time and we only had a month of thinking and developing, due to the rules of the contest.

@ottoman
Yes, there is. If you press Alt + Enter the game will switch to fullscreen. Furthermore if you press F1 you will have a small options menu.

Thank you everyone for playing it and thank you Dora for the review. If you enjoyed the game, we will most likely put some more work into it, once the contest is over.

It took me some time but I finally got it. The order of the 4 blocks for the locked chest is Departure, Deprivation, Sin and Regret.

It took me some time but I finally got it. The order of the 4 blocks for the locked chest is Departure, Deprivation, Sin and Regret.

Thanks for the information! I'd definitely give an updated version another playthrough.

That is great to hear. Since the contest gave us a playtime limit of approx. an hour, we couldn't really implement everything we wanted to.
The extended version of Wait will have more content and will be more rewarding for all of the people that were so eager to find secrets or secret endings.