Wacky Pirate is a new reflex game for both browser and mobile platforms. You're the titular wacky pirate, as described to you by an adorable bit of voice over narration, who's fallen on hard times and needs to fill up the old coffers with as much booty as possible. This is accomplished through the expedient use of clicks. Here's the breakdown of the operation: you need to click the bombs at the bottom of the screen to release them so that they connect with the boats that come whizzing by. Pirate ships will also pass along your coast line, and for them you need to destroy the ice bergs that crop up before them with a few good clicks. Tokens also appear that give you money after a few good clicks, as do treasure barges that leave tons of clickable gold just laying out in the open where anyone can click them. There's a lot of clicking going on is the point, so you'd better get good at it fast. Things are going to get frantic really quickly in Wacky Pirate. 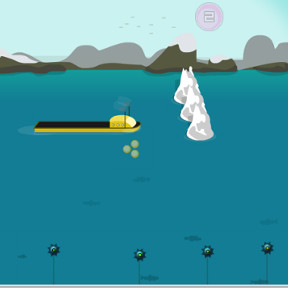 The joy of Wacky Pirate comes from clever time management. The aforementioned ice bergs, for instance, can also be left in place to collide with enemy ships, saving you a few precious heartbeats that you can dedicate towards snagging a token or loosing a bomb. There's also an upgrades system where you can buy more bombs, extend your clicking time, or even up the difficulty on the game in general, increasing the reward as well as the risk. It's not the deepest game in the world. Wacky Pirate is perhaps best consumed on your phone or tablet while sitting on a bus or waiting for a movie to start. That's not to say the game doesn't get challenging. The constant barrage of enemy ships, pirate ships, tokens, ice bergs, and bombs turn the game into a delirious plate-spinning exercise that's sure to keep you giggling in frustrated glee. Wacky Pirate knows what it is and does what it does extremely well. What more do you need?

I love the voice! This game is really fun, and the voices/music are so charming I actually played with sound on for a while (I almost always turn the sound off immediately and watch Youtube while I play browser games).

IT is a bit hard to get the timing down. The icebergs love to pop up right up in front of the pirate ships without warning and no space to get to them in time.

It is an okay game.