When there's somethin' weird in the neighbourhood and the Ghost Busters won't return your messages, who else you gonna call? Lucky for you, Carmel Games has a new investigative team ready to solve all your spook-related issues, and in their creepy hometown, they're always busy. Vortex Point: Far Journeys is the first installment in a new point-and-click adventure series, and this time around you're solving the case of some missing gold bars that he thinks a ghost made off with... in fact, it seems like the whole town is suffering a rash of ghostly burglaries! Just click around to interact and pick up items, clicking on something once it's in your inventory to move it, or to move around town via the map. 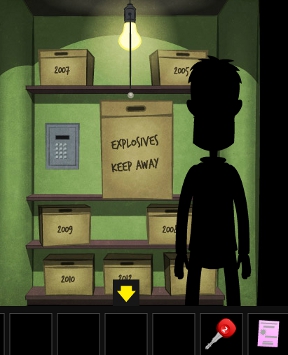 Though still ultimately fairly straight-forward in terms of gameplay, Vortex Point is actually quite a bit flashier than other titles from Carmel Games in a way that makes it both more memorable, and feel like a more cohesive adventure. It's still sorta crazy, of course, with some (hilarious) gore popping up towards the end, and you'll need to be willing to experiment and think outside the pizza box in order to proceed, as well as tickle the old ivories. Also, here's a tip if you're thinking of getting into security work... if a guy who previously isn't on your visitor's list shows up claiming to be someone else, then gets anxious and leaves for a few minutes before coming back with the ID he couldn't produce when you asked for it, you should probably consider that a red flag. Still, Vortex Point: Far Journeys is a fun and freaky game and probably the only time you'll get to see a character casually say "take my magical crowbar" with a completely straight face, and that's something special.

It shows nobody entering a pass code (9570) into the safe and then removing the gold.

Use the piano key guide (the white paper) as your guide to the notes.
Click only the five piano keys noted on the pink flyer.

For ease of explanation, number the keys from 1-12, starting with the marked key...

Brains in the fridge, gold bars in the cupboard.

Another case for the x-files perhaps?

It shows nobody entering a pass code (9570) into the safe and then removing the gold.

Use the piano key guide (the white paper) as your guide to the notes.
Click only the five piano keys noted on the pink flyer.

For ease of explanation, number the keys from 1-12, starting with the marked key...

Brains in the fridge, gold bars in the cupboard.

Another case for the x-files perhaps?

Good game, but i had almost forgot how you have to look everywhere to make sure you didn't miss something. The mirror piece was randomly hidden.

Good story though and I loved the intro, hope to see more!

you have to love the way he just walked away and

left 4 gold bars in a cupboard and a pair of brains in the fridge!

My code for the final door was different than the one in the walkthrough, so it's probably random.

Nice concept, but I hope Case 2 picks up where this episode left off, because the ending for it really didn't work for me.

I mean, the culprit literally got away with murder! I know they can't prove that he has Scanner-esque mind powers right now, but it just doesn't feel finished if he's still able to use those powers to kill & steal at will without ever leaving his cell.

@Rygar:
Personally it kinda bothers me too, but I don't think they can do much about it, even with a magic crowbar. I will also say that he has only killed them because he has a grudge against both of them. He might kill again, but it doesn't seem likely or he would have killed the people holding him and left. Or he can project himself anywhere and still get fed and a place to live and is use to his life now.

What i would like to see is them solve a case involving Ray and Cooper. (One of the other pervious point and click games they made that didn't end to fell for the main characters) Or at least a nod to it in there case files.

4,465 Views
1 Comment
chrpa— Jayisgames needs your help to continue providing quality content. Click for details Welcome to Mobile Monday! The latest Nicolet is here with another lovely game, this time from the pyramid's catacombs. STUDIO MILLA (Ikumi Konya)'s escape is adorable and...  ...