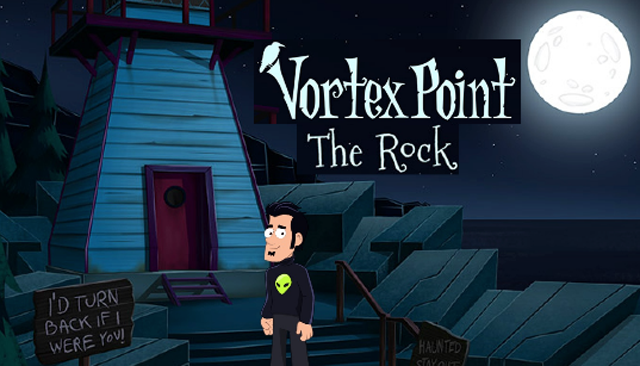 Here we are, another paranormal crime investigation! Vortex Point 8: The Rock is another installment of this spooktastic point-and-click adventure series by Carmel Games. So what's the newest creepy crime you've been called to resolve? 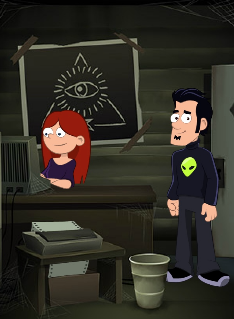 With stories that the lighthouse keeper's body was never found, you've got the inkling that there's some ghostly involvement at play. Now it's up to you to get rid of the lighthouse keeper's ghost. As you explore and prepare for the exorcism, the cursor will change when you scroll over certain objects or people; the items you pick up will go into your inventory, which you can then use or combine with other inventory items.

Like other Vortex Point games, Vortex Point 8 is a fun, cartoonish, relatively quick point-and-click style game. The puzzles themselves are pretty straightforward, but there are moments when you have to experiment or return to the same place several times in order to progress. I appreciated having the map system as I was able to bounce from one part of town to another quite easily. I found the dialogue helpful in setting up the goals of the game as well, more so than in some of the previous installments of Vortex Point. And although charming in its own right, the voice acting and sound can be switched off from the settings menu should you find them too awkward (as I did). Overall the game is spoooooky (emphasis on the ooooo), good for a break from the daily grind. Finish the game and close the case on this ghostly adventure if you dare... until next time.

For some reason, the game doesn't seem to load...

The link's been fixed, yay!

After the introductory conversation, Caroline tells you to visit Craig's new shop. If you talk to her again, she tells you to meet near the lighthouse.
Take the rag from your office chair, and leave the base. Take the knife stuck in the wood just outside the base.

Head down the stairs and enter the Mysterium.

Craig tells you that you need a ghost-repellent charm, that he needs sea salt, sage and sulfur dust to make it. The sulfur dust is in Craig's back room, locked in a box he's forgot the combination to, and the sage and sea salt can be obtained in Chinatown.

The back room is horribly dark, so you need some sort of lighting.

Leave the Mysterium, go down the left entrance to the travelator, and click the red Chinese words for Chinatown.

Take the cardboard box from the house on the right, and then enter the magic herb shop in the middle.

Talk to Jin (the owner), who asks for sea water to make the sea salt. She also tells you that she can't sell you the sage because the cash register is broken, but feel free to fix it for her.

You'll need a screwdriver to open the cash register.

Leave the shop, go down the travelator, and click the lighthouse in the top-right corner of the map.

Before going in, check the box on the outside of the arcade. The glass is too dirty to read the poster inside, and the ocean water on the left is too low to dampen the rag with.

In the arcade, the leftmost machine has its control panel cover visible, but we need something to pry it open. The next machine has a flickering screen and four buttons that don't do anything yet. The other two machines don't work, and there's a CCTV camera in the corner monitoring your moves.

Leave the arcade, go right to the next screen, and visit the World Famous Luna.

Talk to Luna, who's bought (but not yet installed) a new crystal ball to replace her old one.

Take the ruby on the left. Click the box in the middle, and Luna tells you that's she's trying to open it with telekinesis. Click Zoltar, and the printout from the machine says you need more luck. Take the glow stick on the right, which Luna lets you have for a 100% discount.

Leave the shop and enter the Espectro research station next door.

Caroline's here, digging into Espectro's old research on Jefferson. But the ancient dot matrix printer is out of ink, and we need to somehow find a cartridge for it.

Talk to her again, and she tells you that Jefferson's body must be hidden somewhere in the lighthouse, on neither the top floor nor the ground floor.

The roof is leaking water into a bucket on the floor filled with it.

Go back to Luna and cut the box open with your knife. She thanks you and gives you a coin, and gets back to installing her crystal ball. Or rather, she sits around trying to recall where her screwdriver was, so that she can install that ball.

Take the rope from the ground next to the box.

Use the coin on Zoltar. This time, the machine prints out a card with a code drawn on it.

Leave Luna's shop, then go back in. She's installed the new ball, and her screwdriver is now sitting on a shelf on the left.

Go back to the Mysterium's back room, using the glow stick to light the room.

There's a bunch of "Cursed" boxes around, and a box in the middle labeled "Sulfur". Just as Craig said, it's locked.

Take the shovel next to the locked box, the crowbar on the box next to that, and the bucket on the floor next to that box.

Tie the rope to the bucket, and use it on the ocean across Penny Arcade to fill it.

Wet the rag (either in your saltwater bucket or in the research station's bucket) and use it to clean up the box outside Penny Arcade.

Look at the poster. There's some diagrams penned in in the top-right corner: four numbered crosses with one limb marked on each cross with a circle.

Use the poster code on the arcade machine with flashing lights:

The machine spits out an ink cartridge for a dot matrix printer.

Use the knife on the CCTV, then the crowbar on the arcade machine control panel, and yank the CPU out of it.

Go back to the herb shop in Chinatown, and repair the cash register by using the screwdriver on it and then the CPU. Jin sells you the sage.

Use the bucket of seawater on Jin, who puts it in the pan to boil.

Leave the shop, then go back in. Jin gives you the sea salt.

Go back to the Mysterium's back room, and unlock the sulfur box with the code Zoltar "recalled" for you:

You get the sulfur dust.

Give the sea salt, sage and sulfur to Craig, who whips up a ghost-repellent charm (hex bag) that will protect you for a short while.

You'll need to find Jefferson's remains, bury them and pour holy water on them. Craig gives you the holy water, without charging the ludicrous tourist markup, and marks the graveyard on the travelator map.

Go back to the research center and use the ink cartridge on the printer. It spits out a printout containing a code of some sort, or perhaps just 12345 printed 19 times.

Walk up to and enter the lighthouse, which has a skull, some stairs (broken), a safe and a suspicious spot in the ground.

Open the safe with the code from the printer:

Place the ruby in the skull, opening a hole in the floor.

Jefferson's skeleton lies in the corner of the room, next to the drawing that killed him. Use the cardboard box to pick up the skeleton.

Walk back all the way and take the travelator to the graveyard.

The graveyard is locked behind a fence you're not fit enough to climb. Instead, open the gates with the key, and head in.

Dig up the ground on the right (really quickly), dump the skeleton in, and pour the holy water on top.

Mission accomplished... until next time!

For completionists, here's a list of things that are non-interactable but can be examined.