Voices from the Sea

To a young man like Cantus, the rest of the world and all the people in it can just seem like... noise. An indistinct roar that's nothing more than static. Of course, he won't shut up about it either, so it's no surprise that everyone is content to let him spend his time alone, listening to waves crash against the shore. Everyone that is but this energetic blue-haired girl that just showed up in front of him, and who seems aggressively interested in piercing all of his carefully constructed jaded cynicism. (Happens to me all the time!) Why does he even care? Maybe it's something in her voice: a voice that sounds like water flowing, with a breeze in the sky. Something like the Voices from the Sea. Voices from the Sea is a visual novel adventure from Zeiva Inc. about a boy, a girl, the ocean, and sea shells. Lots and lots of sea shells. 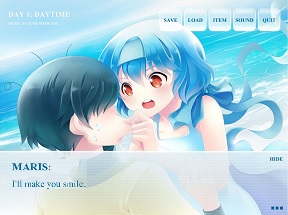 As in most visual novels, gameplay consists of reading through text and making choices when called upon. The text can be advanced by clicking, or scrolled backwards and forwards with up and down. Choices are made with the [arrow] keys, left being choice one, up being choice two, and right being choice three. Truthfully, though, the choices don't seem to have much of an impact: this one is heavy on the "fiction" and not so much on the "interactive" (apart from the different shells you can collect). But while one must admit that the description of its plot definitely makes Voices from the Sea sound like a five-course meal from the Manic Pixie Dream Bar and Grille, it has has a relaxing vibe to it that makes it easy to be won over to its charms. The protagonist is a real piece of work, yes, and there isn't a single Magical Girlfriend trope that won't be checked-off by the end, but the whole thing is, well... cute and happy and silly, and that's meant as a compliment. Like a bowl of candy, Voices from the Sea is more of a sugary sweet guilty pleasure than a movable feast. But sometimes what a person needs most of all is a handful of Skittles, and if what you need is smile, Voices from the Sea will deliver.

Play Voices from the Sea

This was really, really enjoyable. I enjoyed this a lot - the art's great and the game definitely made me smile. This is now my go-to game for whenever I need a big stupid grin on my face.

I'll offer a dissenting opinion: this game is not candy, but extremely bland. The ending was obvious from the beginning--perhaps it doesn't even have multiple endings. The choices amount to 7 in total. Finally, and perhaps it's because I'm a girl, but the Manic Pixie Dream Girl is an overused trope.

I would have really liked to know what she actually was. :(

I gave up on this game three minutes in. It does nothing for me to play as a character who's apparently trying to protect himself from emotional abuse at home and school, only to find more of the same abuse from this so-called magic girlfriend. I won't play further, as I have no wish to see my character slowly contract Stockholm syndrome in relation to this manipulative, intentionally cruel and demeaning person.