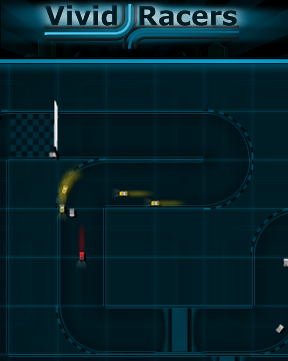 Set in a neon world faintly reminiscent of Tron, PostBeta's Vivid Racers is a colourful racing game with a unique twist to it. As usual, you'll accelerate using [up], but rather than the [left] and [right] keys directly steering your car, they'll switch you one lane in that direction. Each of the six tracks has 5 lanes, but turbo boosts (activated by driving over them) and traffic mean its not as simple as sticking to the inside lane at all times. It's a clever concept, like an advanced version of slot car racing, and even comes with the ability to build your own course. There are minor frustrations, such as the controls being relative to each vehicle, the tiny size, and the tendency for vehicles to respawn in the same lane as you, but these are somewhat balanced by an easy difficulty curve. For anyone really struggling, an included track editor allows you to create and race on your own course instead. If you like the idea of driving round a track at 200km/h but traditional racing games leaves you spinning in circles, PostBeta may just have invented the perfect game for you. It's easy to understand and easy to play without compromising on challenge or fun.

Well, that was really weird. I barely got a 2nd place on the first track, and I made such a good score on the second track that I am now world 3rd on it, on my first try.
I can't really understand how this game works, really really weird.

Those white cars sure have a death wish, changing lanes directly into me semi-regularly. I wonder if they're unmanned drones with "self-destruct to take out anything that moves" programming leftover?

Not that the yellow guys have a stronger self-preservation instinct, since I've been blatantly rear-ended by them on a long straight stretch multiple times already.

Speaking of which...did the yellow cars get an illegal turbocharger upgrade? Every so often I hear an engine revving and one of them accelerates like crazy, faster than the green turbo strips and nowhere near one of them...where can I get one?

Fun diversion, and I personally strongly prefer relative controls especially for a racing game like this. Would be strongly improved by a "pedal-to-the-metal" option to always accelerate except when braking; would be easier on the hands not having to hold down the button.

Yeah, there's a nice idea in here, but the combination of much-faster opponents and suicidal racers makes it frustrating to play. I've been repeatedly rammed while respawning, even.

Oh, and I can't tell if the positioning system is glitched or has some rules I'm not aware of. I've been in first with no crashes and the game thinks I'm in fifth. I've crossed the line flat last and registered as third, possibly because two of the cars who'd already finished crashed. I've been overtaken on the final straight by a turbo'd up opponent and still registered as first.

There definitely seems to be a glitch where replaying levels doesn't always change your saved performance, as well.

Ah, looks like it only records your best time, not your best position. Because my fastest time was in a race where I finished in second, getting a first doesn't overwrite the second-place record.

Oh, and performance looks to be heavily based on browser and processor speed. I did a similar lap on the first track in Firefox and Chrome (inside lane, no crashes, switch only when necessary) and recorded race times of about 48s and 1m7s respectively.

Nope, just beat my time and position and it's still keeping the old record. Odd.

And the speed seems completely arbitrary. I literally played a race, hit replay and played again in the same browser, with no other tabs open or other programs running. 15s difference on a sub-60s track, with the game running visibly faster or slower apparently on a whim.

What a silly "game"

It is nothing more than like a horse racing game I wrote in basic back in the day.

I will not rate because is not my sort of game these days but if I did it would be a one max.

It can't really be called a "unique twist" or "clever concept" when Pixeljunk Racers made the exact same game, pretty much, back in 2007. I thought the point of these Flash/indie games was to be able to try out NEW gameplay concepts without the financial risk of the big publishers? What's the point if it's literally just a watered-down version of a game that already exists?