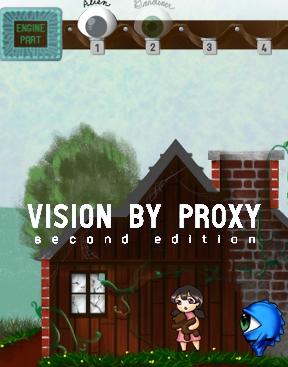 It's the heartwarming tale of a little alien just trying to find his way home by stealing the eyes of unsuspecting people in Vision By Proxy: Second Edition from DeLeonGames, a fully authorised remake of a student project from Georgia Tech (Team Rose) that debuted at 2010's E3 IndieCade showcase. In this little puzzle platforming adventure, you'll guide our little blue bided outsider in search of the missing part he needs to repair his ship after he crashes on Earth. He's only got the one eye, however, and our world looks foreign to him... so it's time to give The Sandman a run for his money and snatch the eyeballs of various characters, which lets you see the world in different ways. Use the [WASD] or [arrow] keys to move, [spacebar] to jump, and click on any eyes you get at the top of the screen, or use the number keys to swap between them.

A little cute and a little creepy (okay, maybe more than a little), Vision By Proxy is a clever concept with a slightly clunky execution. With its repetitious stages it winds up still feeling more experimental than anything else, and a few different eyeballs to yank would have done wonders for keeping it fresh as you go along. Despite this, however, the game still plays and looks quite good, with its storybook illustrations and beautiful artwork. The idea of having the landscape change vastly depending on whose eye you happen to be looking through makes for an interesting spot of gameplay that we'd love to see explored more in the future. Have a peek at it, but just remember; eyeball stealing is not a game and is more likely to earn you a jacket that gives you continuous hugs than it is a nifty flying saucer.

hhmmm ... I couldn't get out of the house with the girl

MtDewed, try swapping your current eyeball with a different one.

Go all the way to the right side of the screen, use the gardener's (old lady) eye to climb up on the house there, then switch to the little girl's so you're standing on top of the block with all the shapes in it. Wait until one of the clouds comes by low enough (some are too high to reach) and then let it carry you all the way over to the top of the tower. Once you're standing on top, switch back to the gardener's eye. Hope that helps!

Very cute and creative game (:
Short but I like that you have to think about the way the eyes change the scene.

can someone help me with a(the?) challenge level? I'm using the little girl's eyes to jump on the clouds to get to the high platform, but there's that cat with balloons in the way... do I need to get the architect's eyes?

Fun, short game. I think the mechanic they use has a lot more potential, that would be neat to see it used in a more in-depth game. I felt like the "normal" levels were more like an introduction, I found them so simple. The "Challenge" levels were quite fun though, I just wish there were more.

How I did that part, and I believe it is the only way you can do it, is you switch from the little girls eyes to the gardeners eyes JUST after you jump off the cloud, while you are in the air moving towards the balloon cat. It took me a time or two, but with the right timing it works.

thanks johnny!
now I need help with another challenge level. I'm on the architect only one, and I'm trying to find a way to get to the engine part behind the wall of platforms.

I enjoyed it, but is there any quick way to get to the challenge levels? I didn't realize they even existed since they don't seem to show up until after the credits, after you play the game. Going back to the page the game wouldn't load again. So I went to another site, played through it, and then accidentally clicked on the bookmark tab - losing access to them again. It wasn't quite interesting enough to give it another try.

But it was still a fun little game, albeit it very short.

However, short. And the challenge levels aren't really worth your time, being less about additional puzzle ideas and more about finicky platforming challenges.

The direction I'd like to see this go would be expanding into a more full world/adventure. The two games I'd look at for inspiration, if I were these developers, would be the original A Boy And His Blob (for a sense of expanded world) and the 2008-or-so Wii remake (for how to expand in a more discrete-puzzle direction). Key for both directions would be a greatly expanded set of eyes/characters.

I greatly enjoyed this game. It challenged my adaptability & perception. Bring on more.

This made me think: what do my eyes see?

Agree with q_boy. I *do* understand the poor creature's wish for a new eye, although I don't really support its way of procuring them...

Sure, the concept was a little interesting. I haven't heard of the idea of taking eyes really, and it could have been quite a unique and cool game.

But it wasn't. The gameplay introduced hardly anything new, and nothing required you to really think except for the clouds. All in all, it was like Shift with 4 colours, and a lot less creative and varied than that game. The level-design was the most boring I have ever seen, with each stage seeing a slight re-arrangement of the same things introduced in the beginning. And even that wasn't done well.

Am I mistaken in believing this game has repurposed graphics from an original made a while back? I don't think the new developers were able to make anything. The extremely chunky animations in the intro and end (the ones that minimized any idea of a cool plot or interesting perspective due to their sheer amateurishness and kitsch) as well as certain randomly moved elements suggested this. The floating house, as well as the random cluster of rabbit-clouds haphazardly mushed together in the last level are particularly indicative of this. If the game's designers were capable of designing new elements, they should have.

This is one of those games that is both overrated and overplayed. With a slightly unique concept, it attracts critical attention unlike genuinely fun games without some interesting gimmick. I've seen more and more of these, The End being another example. Plagued by either incredibly bad gameplay and controls like The End, or just about every problem in the book like Vision by Proxy, there is only one response I can come up with when I play these games: they suck. I'm not going to continue to experience a game that continually turns me off with so many senseless and poorly thought-out elements.

So yea, this was a bit - I mean, a huge - rant, but I've been really wanting to say some of these things. Most of my posts here are critical, I know, but someone has to say it. And if you've read this far, thanks for at least humoring me.

Kerchunk, I say!
I would very much like to see more puzzle levels, the game was too short.
And if the idea wasn't original and mechanics were done poorly, as Jon suggests, I think there's the slight Angry birds effect here. It's not about original idea, but about the whole product - sounds, music, visual effects, animation, "characters" and gameplay. If one element is bad and all other fairly good, I'd incline to give the game a fairly good grade..

If you can't maneuver to it, what else can you do?

I think it's the only time you need to go back to the alien eyes.

I can't figure out the first challenge level. I can't find the architect anywhere.

Climbing the level of bunny-clouds with child eyes gets me nowhere, because at some point the gap is too big to jump and I fall.

I got to the second challenge level before I had to quit. Nice little game, but the loose controls coupled with lots of platforming and nausea-inducing visuals killed it for me.