When you hear about a wizard leaving behind some vague "secret" in an ancient dungeon filled with giant spiders and zombies, do you go after it? When you find a recipe for an undefined "elixir", do you set out to find a stranger to mix it for you so you can quaff it down? If so, then congratulations, you're the protagonist in Fire Victory Games' action RPG Vilesteel. To play, just click to move around, and click on enemies to attack. Click and hold on them to keep attacking, hold [shift] to attack without moving, and either click the icons at the bottom of the screen to use your special abilities, or hit the corresponding hotkeys. You'll gain points in your attributes like vigor and so on as you fight depending on how you play, and when you level up, you'll gain even more points (automatically distributed), with the option to choose an extra ability every four levels. As you slay enemies and loot chests, you'll find randomly distributed treasure and equipment of varying rarities. Equipment can be upgraded from certain NPCs for a fee as long as you have the potions to do so. The story? Well, uh... you're a powerful hero, and you travel from place to place kicking evil's butt, Minsc-and-Boo-style, and that's about it. If you're looking for depth and strategy, Vilesteel ain't it, but if you want hack-and-slash style dungeoncrawling distilled down to a fine soup, you might find it a light and tasty lunch indeed. 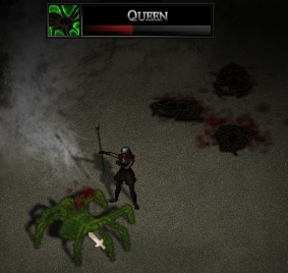 Make no mistake, Vilesteel is an extremely simple and repetitive game, with a story that's barely there and gameplay that basically amounts to wandering around places and turning everything you encounter into a pulpy mass. Areas are often big and empty, and at one point I actually thought I'd run into a bug since I couldn't find the boss of a particular location... we kept missing each other as we stumbled around an inordinately huge and featureless room. Despite that, however, there's something satisfying about Vilesteel's coffee-break style action. There's no real grinding to speak of since as long as you make an effort to clear areas of enemies and get decent equipment (the treasure chests are very generous) you'll be able to handle just about anything, so the hack-and-slash dungeon crawling is streamlined for reward. Reward consisting solely of more powerful equipment, of course, but reward nonetheless. Vilesteel feels more like it has the bones of a really good action RPG than enough meat and flesh wrapped around them, which is maybe appropriate given how many skeletons and zombies you'll be crushing, but there's clearly been a lot of effort put into it, and one can only hope we've got a beefier sequel coming somewhere down the line.

What is this game? no one has commenting lately?

You can get really far in the game using a barbarian and just mashing the attack button. I'm curious to see how other builds and strategies work, but not curious enough to start over with a ranged or magic character.

Had to start over because the game auto-saved in the middle of a fight a split second before my character died.

Experimentation indicates that ranged attacks are a joke. Remember that scene in Indiana Jones where the guy does some fancy scimitar moves and then Indy just shoots him? This is the equally hilarious opposite. When battling a ranged attacker, you *could* stand apart and plink at each other until somebody falls, but it's much more satisfying to run up to them with dual hammers (or swords or hatchets, but never a shield) and take them out in one or two clicks. It's a shame that ranged attacks are so useless, because they're really nicely animated.

Beat the game on normal difficulty. Found a glitch with the final boss:

After a certain point, he vanishes and re-spawns some distance away with some new minions. I was fighting him near a wall at that point; he and his minions re-spawned outside of the playable area and we couldn't reach each other. Entering and exiting the room didn't help; I had to reload and do the whole fight from the beginning.

I've been experimenting with different skills in the late game and new game+. These are all described in the game guide, but I'm using spoiler tags just in case.

Similar to non-magical projectiles. Even at high levels and with magic buffs in place, weak enemies that normally fall to a couple of melee hits can withstand extended sessions of grim daggering. Not recommended.

Incredibly useful. There are skeletons and/or zombies on nearly every map just waiting to tank for you. Let a zombie distract the spider swarms, or get an infernal archer buddy to take the heat off of you in a dungeon. Does not work on vampires.

Not as useful as Dark Minion. It doesn't work on spiders, demons, golems, bosses, or NPCs-- only on certain normal human enemies, which can only be found on a few maps and are, counter-intuitively, squishier than the undead. If you find yourself in the middle of a wave of bandits, this can help to turn the tide, but there are better ways of avoiding or dealing with that situation.

Health potions are more common than mana potions, so using mana to restore your own health is kind of a waste. This is the only way to restore a possessed minion's health, but it's generally faster and simpler to just get a new minion.

Really enjoyed this one! No real bugs that I noticed except for a touch of lag. I played through it with the ranged character, and though the beginning was a little rough, once you get the "incendiary" skill and some decent equipment the archer is ludicrously powerful. I used a grand total of 4 cure spells and 5 mana potions to get through the last map including the boss. Thanks for this one.