Like Sentry Knight and Elona Shooter, HighUp Studio's Viking Valor is a defensive shooter, one that, specifically, revolves around blasting vikings in the face with cannons. See, some king stole a gem from your people, and to get it back, you have to kaboom your way through vikings, viking tanks, viking sorcerers, viking bombs, viking... bats?... and, well, you get the idea. In each level you'll face waves of enemies, and all you have to do is aim and shoot with the mouse. In addition to dropping cash you can spend on placing traps to hurt or hinder, your foes also net you experience points, and every time you level up you gain points you can spend on upgrading your weaponry and spells. Oh, didn't I mention? As you level up, you unlock various spells you can activate with [Z], [X], and [C]... each has a cool-down timer, however, so don't go using them willy-nilly. If an enemy reaches and manages to damage your ship, don't panic! Just make sure you pick up the boards occasionally dropped, since they can repair the ship's hull. Of course, you still want to avoid damage as much as possible, since you're awarded stars for each stage depending on how much damage you took, and those stars are used to unlock new traps and upgrades for them. 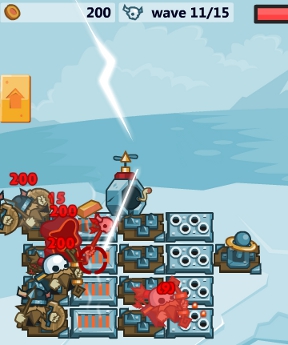 I'll tell you right now that the main issue with Viking Valor isn't how short it is, but rather how much it encourages grinding for levels and upgrade points by replaying completed stages. The problem with this is that levels are long, making replaying them more of a chore than a game should be, and coupled with that overall short game length means it feels like Viking Valor is padding itself more than what's reasonable. Especially since, unlike many defense games, there's no way to reallocate spent points. It's just disappointing, since although Viking Valor doesn't really bring anything new to the defense-shooter genre, it's still a very colourful and addictive little game. Difficulty ramps up substantially after the first two levels, with piles of enemies and different types of them to boot, and all the upgrades and spells feel useful and well thought out, if perhaps obnoxiously expensive. Viking Valor is a good game hampered by grinding, and even giving multiple difficulty levels for each stage so replaying them wouldn't have felt so same-y would have alleviated a lot of the frustration. With a little more fleshing out Viking Valor could be a serious contender, but as it stands, its fast-paced and chaotic blasting action is still a nice chunk of casual defense to break up your day, even if it doesn't break the mold.

So I suspect that the fire tube launcher is not working as intended. Its fire damage per second goes from 9 to 15 with the first upgrade, so logically the second should be from 15 to 21. Instead, the damage is currently a rather gamebreaking 210.

The 'add to favorites' link is missing...

I think that the fire tube description is a typo - I don't think it actually does that much damage in-game.

I actually found this game to be a lot more fun than I expected. Other than the final boss, which had way too much health and did no damage (bug?), this was a pretty balanced little game.

Mantus, I watched it deal massive amounts of damage to enemies. It definitely was functioning as the description said. Try it yourself, set fire tubes on the far left of the map and don't shoot. They take the 210 as described.

Any hints to kill the last boss? Even with the map for of traps and cannons upgraded to the max, I can't get him half-way down.

The last boss? He didn't do a single point of damage, even though he was right there up against me for at least 75% of his health...