After living peacefully and prosperously under the watchfulness of a magical tree, trouble hits your viking settlement. Savage tribes have become jealous of your land and use dark magic to destroy the tree. The Viking Brothers start a quest in search of a way to restore the tree in this resource management strategy game from Alawar. Follow the pair through Asgard and beyond, cleaning up the land as they go, following vague clues from a hermit, all in the hopes of saving the tree and returning to their way of life. 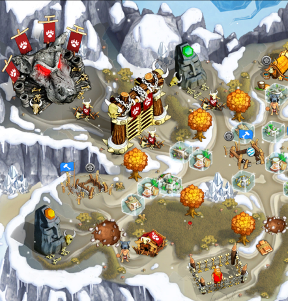 The control scheme is similar to other games of this type. Just a click sends your workers off to build, upgrade, or collect resources. Most level goals consist of gathering enough resources, fixing up statues or other landmarks, and scaring away the baddies, and are listed on the bottom of the screen. Your current resources are listed at the top of the screen, and the timer countdown on the left. Hover over any object to get more information about it. You can queue up tasks for your workers, but if you change your mind, right click on the check mark to cancel the order, if it isn't yet underway. Some levels include magic totems. When you send a worker to activate a totem, you'll get a run speed or production bonus. Aside from your regular workers, most levels need some muscle to destroy enemy blockades and fight off warriors. It's up to you to build a barracks and get a soldier or two on your side.

The game has followed the great example of Kingdom Chronicles in its design. There's just something about restoring your homeland that leaves you satisfied. And while the story line may be a bit over used (and perhaps plays into stereotypes a bit), Viking Brothers overcomes the trite with creative map layouts and good level design. It's a challenge to get a gold star on each level! It's important to look ahead to what resources you're going to need to plan a strategy. Upgrading everything all the way is rarely the best way to go, so it pays to take a second to think. The graphics and music are nice, and while not terribly innovative, Viking Brothers nonetheless offers a solid and enjoyable gaming experience.