Based on Wilkie Collins' 1859 story The Woman in White, Victorian Mysteries: Woman in White is a stately and serene casual game that gets the mixture of hidden object and adventure genres just right. As you wander through the victorian mansion, collecting keys and investigating the area, you'll encounter interesting people as well as a few unusual mysteries of your own, adding a level of warm depth not seen in every hidden object game out there. 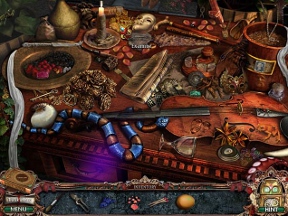 The train stalls just outside of town, and Walter Hartright must continue his journey on foot. He was recently hired by Mr. Fairlie of Limmeridge House to be his daughter's art tutor. Walter makes his way on foot through the dark night to Cumberland when he encounters a strange woman on the road. She barely says three sentences when she is frightened off by an oncoming stagecoach, but Mr. Hartright can't seem to shake her from his mind.

As soon as you arrive at Limmeridge manor, the game begins. Not wanting to wake the servants, Walter decides to find his own way into the house. Mr. Fairlie is a curious sort who likes to hide keys around his home and lock doors with tricky puzzles. Very convenient for a video game setting, don't you think?

Victorian Mysteries progresses quite naturally with hidden object scenes interspersed between rooms of exploration and puzzles. You'll note a number of glowing/sparkling areas on the screen, each beckoning you to take a closer look. To gather the items needed to solve puzzles and continue through the house, you'll need to complete a few hidden object scenes (which reward you with a number of inventory items at the conclusion) as well as pick up a few objects here and there.

Inventory puzzles are the bulk of the game, but the burden of challenge is spread evenly across object finding as well as mini-game puzzle solving. The story never takes a back seat to the gameplay, and it's told with such upright interest you can't help but fall for the Woman in White mystery. 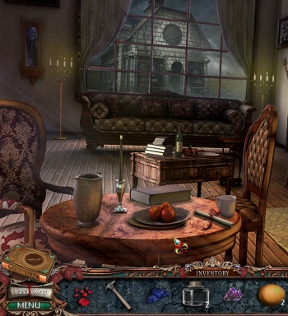 Analysis: Casual games are rarely noted for their storytelling, but when you base your title on a novel so well-suited for an interactive medium, you can't go wrong. Victorian Mysteries has a great story and it tells it well, with details emerging both from the internal thoughts of Mr. Hartright and from characters you meet here and there about the mansion. Even though you're not "stranded and alone in a mysterious place", you sort of get that feeling while wandering the warm halls of the mansion, creating a wonderful tension between the main character and the world he inhabits.

Challenge-wise, Victorian Mysteries: Woman in White won't offer too much resistance. Even though all of the mini-games have a skip button and the hint timer constantly recharges, you won't have a tough time making it to the end. You can choose between "casual" and "expert" modes when you start, so if you want a little extra oomph, choose the latter and give it your all.

Victorian Mysteries: Woman in White is one of those games that rewards the player for taking his or her time and doing extra reading. While the story the game is based on isn't the most intricate piece of literature around, you can still peruse the in-game diary for more details about the people you meet, including family trees, dirty little secrets, and info on characters that aren't in the game. Background information is always a great way to inflate interest in a game's world.

With a setting so rich and a story so intriguing, you'll have a hard time not getting drawn in to Victorian Mysteries: Woman in White. The gameplay runs without a hitch alongside the story, creating a smooth experience from beginning to end.