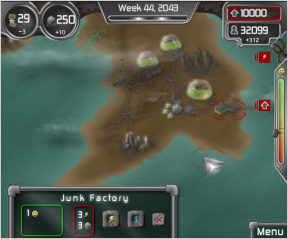 Via Sol 2 is the latest from scratchware auteur Helmi Bastami, whose Flyborg Games site champions the slogan "New Media, New World". It's appropriate considering the subject matter of Via Sol. You play the president of a colony of human refugees who have escaped the calamity of Earth to create a new home on a planet whose orbit keeps it on the opposite side of the sun. Hence the name "Via Sol", which means "through the sun" in Latin. The game is a casual-ified Sid Meier's Alpha Centauri-type management game, which is so much more fun than it sounds.

In Via Sol 2 you try and maintain housing, food, material and electrical supplies to keep the population from becoming upset. If everyone gets too unhappy they revolt and depose you, but if they're content you'll be hailed as a savior. Gameplay is extremely simple: just build the right stuff to maintain the balance and keep up population growth. Simply click on a square next to one with a building then choose which construction to start. Every building carries a cost in electricity or ore, creating a very intricate cause and effect web.

Analysis: The game is deep for a web-based title, a testament to what you can do with good design. Each building has a futuristic mystique that makes you want to build them simply because they look good arrayed around the world. Your own little pet utopia. Of course the temptation to install a police state always looms as well as mass-starvation and sweeping brown-outs.

For all its compulsively fun gameplay, Via Sol 2 isn't content to simply entertain, it's also a satirical game with a political message. Text dialogues are thrown at you from time to time that touch on cynical notions of corporate corruption and shadow government.

Basing the game on manufactured happiness, where a "Faux News" company can be more useful to your survival as a leader than a nuclear power plant, flavors Via Sol 2 with a decidedly anti-establishment notion that deceit rather than genuine interest in the population's well-being is the fuel behind the fires. Also consider that it's possible to avoid building any houses while you climb the tech tree and get your industrial base in order. The unhappiness caused by homelessness isn't too great for an extra toy factory to counter.

Via Sol 2 is a sarcastic, witty and sometimes poignant look at society hidden behind gameplay that blends deep strategy with simple mechanics. If you aren't careful, you'll lose many hours to this little gem.

Fun game. My only big complaint is that it's too easy to build on every.

On the entire map. I usually invest in a lot of Quarries and can do this very early.

Cool, but very difficult. I had to put a whole bunch of relatives in charge before I could eventually win (even on beginner). The happiness meter drops so quickly!

The trick is to

build quarries on the vast majority of your flatlands until you can get tech two, at which point you should use biofarms and wind farms to cover all flatlands and hills, respectively. Happiness is almost never able to drop too fast for you to catch up with the early drop using this strategy. I can consistently get about +10/-0 happiness growth with this method. You need just enough for basic functionality until that point. And the answer is always more ore.

And about choosing your starting point:

If it's possible, you should find a point adjacent to an ore deposit and a river, providing quick, cheap boosts to ore and energy production. These will fuel you for the early parts of the game.

heck, i completed this in like, half an hour but this game rocks. its been out for a while though, so im sure allot of other people have played it.

Actually, I found that a better build order was to:

1) Choose a spot next to a river and an ore deposit
2) Start building a College
3) Send roads across the entire map to build on all the deposits
4) Build hydro dams on all of the rivers on the map
5) Finish college, start building Fortress
6) Build two towns
7) Start spamming farms, nuclear plants, and the occasional quarry until victory
I never build any quarries until the late game, and after a failure or two of practice, I can always get the towns and farms out before my happiness level drops too low. Then it's just about building more of the correct resource until you win, all the difficulty is in the first section to get a solid foundation. I can win pretty easily on difficult mode with the really obnoxious governments this way.

Great game! I love the distinct civilization-ness of this title, and the black humor and not-so-subtle sarcasm works perfectly here. The gameplay is pretty deep (and challenging!), and the whole game (graphics and whatnot) feels very polished. Plus, any game where "No, you insolent fool!" is a valid dialog option is gold in my book ;-)

kleptocracy on map two, is it even possible?

Can anyone do Kleptocracy on Pro for Level 3 without needing to let your relative take your place?

I liked the game, but what I didn't was that at the end of the game when happiness reached 100% it gave me the option to

kill all of the ... with a list of population categories with jews on top.

. that's not funny even in sarcasm.

Great game, but IMO interrupted by far too many "events" - they really ruin the pacing of the game and don't really add much. The sarcasm is funny the first couple of times, but after that I was scanning the text as fast as possible to know which choice to click to get on with the game.

On the menu it states whether or not you have "cheated".
Does anyone know what this means, or if it's even possible, how to "cheat".

I love this game so much! It's probably my favorite game to play online now, since satrical humor is my favorite kind, the messages in the game appeal to me, especially the one that was about finding the bodies;

choose the one about adding that person's body to the pile and read the following text.

I laughed for about 5 minutes after reading it.

What Is The Cheats?

I just put them in a police state..hahahahahha!! MUAHAHAHA!
...Ahem.
Now to test out cheats.

ALWAYS build towns first. Citizens are very angry homeless.
*by the way, game is awesome, an improvement from Via Sol 2. I didn't even really know how to play that game.

it took me 2 tries to beat the game on kleptocracy without having a police state. and when i play i almost never have energy till i get tech 3 which is bad and i lose 27 people per week but i gain way more than who die and i just use via sol tv and junk factories till i can make nuclear power plants

the cheats dont work why i press 1 or ~ but nothing

HOORAY for the cheats!! It took me forever to win the game- on beginner- world 1- free market. Countless relatives put in charge, and I even cheated several times. I'm embarrassed now. :) @wyld's method got me to a 'win' first time I tried it tho- thanx so much.

I feel obligated to mention (damn OCD!) that "Via Sol" actually means "Sun Road" or "Way of the Sun" or various other translations. "Through the sun" would be "Trans sol."