From Red Medusa Productions, creators of the Versus flash animation series, and XPYC Team, creators of... potato chips (I think?), comes Versus Ohrustenny Quest. The small amounts of in-game text are in Russian, but the general story of this point-and-click adventure should be clear in seconds. A fair maiden has been kidnapped, and it's up to the Fourth Musketeer, who is actually a swordsman, to rescue her from her captors. And plug some snacks you'd probably have to import to ever get a chance at taste. But hey, we've seen quality foreign junk-food-based advergames before, and this one is definitely worth an impulse try. 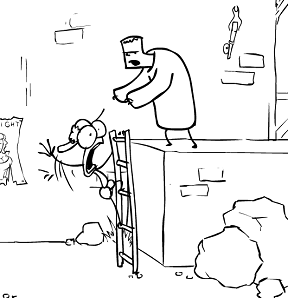 In each of the five main scenes, click objects on the screen to make your way though the challenges of the castle and up to the maiden's tower. There are plenty of deaths and red herrings to click, but they tend to be amusing and restarting is a snap. While fans of Versus might recognize a few more inside jokes, Versus Ohrustenny Quest has gorgeous animations filled with life and creativity. Certainly some aspects are a little naughtier than you'd expect from most potato chip commercials (which is to say, those offended by stickpeople butts should pass), and it's a game that never lets the possibility of logical puzzle solving get in the way of a chance for an anvil falling on someone. Still, fans of Puffballs United's "X-ing the Y" series or physical comedy cartoons generally, should crack open a bag of Versus Ohrustenny Quest and see if they can't just eat one.

Good. But weird. Racier than one usually sees around here....definitely earned that orange :S label. The animation is very well done, there was certainly time put into this. And the "music" and sound effects were nice touches and suited the visual style.

Got as far as the "Mario" stage, couldn't work out where or when to shoot. Gave up there.

On the Mario stage, just keep blasting and you'll eventually hit him. But that's the end of the game, so you're not missing anything.

Nice game, overall - would like to have seen more levels. I like the concept of point and click game not just as "choose the correct path or die", but more as "we'll entertain you with several wrong paths before we direct you to the right one". But this only works, like here, when the animation and story were great.

Shoot mario, but I actually more want to shoot the one one the tower after I have saw the ending...

Not potato chips, but baked breads

The hyperlink for "before" is not made correctly. It points to a tag search for the game, which of course leads to no games. Might want to fix that.