I am the engine that revs in the night! I am the pleather seat cover that sticks to the back of your legs! I... am Vehicles 3: Car Toons! Vogd and Assaulter take the wheel for more rubber-burning physics puzzle action in this latest installment of the Vehicles games. As usual, you've got command of a group of sentient rescue vehicles, and it's your job to not only get them safely within their designated parking zones, but take care of any lurking baddies along the way by pushing them offscreen into the endless darkness of the pit below, because car judgement is way harsh, man. Just click on a car to start it moving, and then again to make it slide to a stop. Timing is everything as your cars gain momentum, and stopping them too soon can mean they either don't hit their mark, or too late, which could send them hurtling right past it. Certain pieces of the environment can also be clicked for removal, and you've also got the "force" ability in limited uses on certain stages, which, when clicked and then activated on your chosen car, makes them use a unique ability to help them get around certain obstacles. 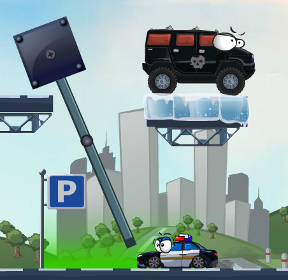 For a game all about cars going fast as a mechanic, Vehicles 3 feels pretty slow to start, with a lot of overly easy "baby's first smash up" stages to ease you into things. It's helpful if this is your first time playing the series, but if you're a fan, you already know the ropes, and the slow progression might feel like a bit of a drag. When things do get challenging, it's often more a matter of timing and reflexes than the supremely elaborate later stages of, say, Vehicles 2, and I did somehow manage to break the game at one point while reloading a level, somehow accidentally teleporting myself to a non-existent level 99 that consisted of only a smear of wiper fluid and necessitated a reload of the page. Car Toons keeps the goofy humour and charm of the original two games largely intact, however, from the corny jokes to the goggle-eyed expressions that change depending on the actions you take. It's challenging in a different way than the series initially began, and you'll definitely find that the latter portion of the game's 36 levels gets a lot trickier, which helps make up for the training-wheels-easy first fifteen stages or so. Vehicles 3: Car Toons is different, but still a solid game with a lot going for it, and well worth a spin.

Ragequit on level 26. I'm doing the exact same thing as the video walkthrough, so how is it that it works for them and not me?

The physics in this game is ... inconsistent. Or too picky. Either way, doing what seems to be the same thing twice can give very different results, so luck is a real factor. It's been that way since the first game in the series.

You have to reduce the size of the game. Why ? Increase fps, it's badly coded, whatever your fps is, the powerup will last as long, so if the game goes slowly it won't be long enough.

Also, this game is good like the others but this one is too easy I think.

Some really epic locations to check out in Forza Horizon 5

130 Views
0 Comments
jayisgames.com— In terms of the shifting dynamics of the rapidly expanding gaming sector, there is a great deal on which to reflect on the past year. Despite 2022's apparent slowdown, the gaming industry is primed to break through to even greater...  ...

Towers and Titans: An In-Depth Look at the Game's NFT Heroes

8 Views
0 Comments
jayisgames.com— Blockchain gaming has been a buzz term for the last few years, but the vast majority of gamers haven't really engaged with it....  ...