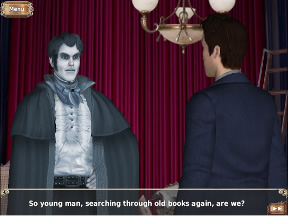 Take on the role of the oddly Keanu Reeves like Michael Christensen, employee in good standing at the firm of Rockwell & Rockwell, and the soon to be recipient of an excellent opportunity for career advancement (this, granted, due to your predecessor having gone batty). The ancient Malgray Manor will soon be up for auction and you have been selected to appraise the mansion as a potential purchase prospect for your firm. If only things were that simple.

No sooner do you arrive at your destination do you begin to realize that things aren't quite right. Over the course of twenty-four chapters your task evolves from simply appraising the worth of a mansion to solving a centuries old mystery to ultimately fulfilling a very bizarre request. And all of this while coming to grips with the, um, curious statuses of vitality exhibited by your hosts.

Standing in your way are a brood of hidden object scenes, adventure game style puzzles, and classic mini-games. Luckily you have your wits and a decidedly quirky cast of creatures of the night to help you (to varying degrees) on your nocturnal quest. Just remember to steer clear of Glenfield when he's checking his email, and don't worry too much about the thing that goes bump in the night, it's probably just Rover who doesn't really bite people's head off.

Analysis: Vampireville is positively frothing at the mouth with a likeable kind of faux horror camp. With its juxtaposition of classic vampire tale settings and tongue in cheek dialogue, this game ends up catching the same vibe that earned such devoted followings to Scooby Doo and the Addam's Family. 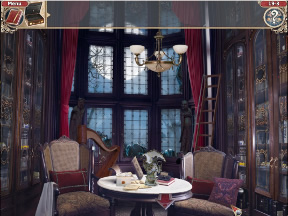 Helping make this a success is the high quality in Vampireville's aesthetics. The decision to use three dimensional polygon models for all of the characters and some of the effects helps give this title a visual feel that sets it apart from most hidden object games. Most importantly it helps imbue a great deal of personality into the central cast with, in some cases, some pretty impressive looking models.

Supplementing the great visuals is a witty script that is excellently voice acted. Suffices to say that while Michael Christensen looks uncannily like Keanu Reeves, at the very least he is voiced by someone who is actually capable of speaking in an English accent. Not only is the dialogue capable of coaxing a smirk or a giggle from time to time, but it also does a serviceable job in keeping the gameplay tied together.

When it comes to gameplay, Vampireville doesn't exactly burst with originality, but it is apparent that the fun dial is cranked up to eleven. The clean presentation makes object finding actually pleasant as opposed to painful, and all of the tasks set before you from the familiar mini-games to the rapid fire item based puzzles are all very nicely timed and help keep up an invigoratingly brisk pace. By breaking things up into manageable bite sized chunks, Vampireville ends up moving too quick to let its audience get bored while providing an experience that fits perfectly into casual game breaks.

Perhaps the one area where Vampireville does distinguish itself in gameplay is in the fact that instead of punishing random clicking, it rewards and even necessitates it. The background is often open to manipulation in a number of ways and in order to find every object and item you'll push and pull a number of objects out of the way. This dynamic is actually a double edged sword. It definitely spices up the gameplay a little and gives Vampireville something to let it stand out, but this can also lead to undue frustration. Thankfully the rechargeable hint system is quite generous.

Beyond that there are few other problems with Vampireville. The use of polygon imagery has its drawback in that textures seen too close up tend to look kind of mushy and out of place. Further, while the story and story telling have their charms, one feels that more could be done. But I suspect the biggest complaint this game will draw has to do with the chaptering system. While breaking the game up in twenty-four chapters is great for pacing, your game is only saved in between chapters. If, for some reason, you have to put the game down mid chapter, you'll have to start that chapter all over again. Still, considering that no one chapter is particularly long or difficult, this isn't too bad.

With more focus on fun than difficulty, and humor instead of horror, Vampireville is an excellent offering for casual gamers looking to take a bite out of boredom.

Jayisgames has always been one of my favorite sites, but lately it's become ridiculous how many ads and pay-game reviews you have to scroll past to get to the kind of review of a free internet game that made me love Jayisgames in the first place. I haven't been following all the comment boards, so maybe this has been addressed elsewhere, but I just wanted to say that I'm disappointed in the direction this site is going. I realize you need, and deserve, to make money from this site, but there has to be a better way than bombarding us with advertisement features and advertisements disguised as reviews. A fund drive one a year to ask for money would be a much better option. We'd come through for you, I promise.

[I appreciate the feedback, and thank you very much for your support. We have, for a very long time, featured download games on the weekends, and browser games during the week. But we have had to increase the number of ads to make ends meet due to rising costs paired with a decrease in revenue. I do like your idea of a fund drive, and I'm also working on a subscription system where subscribers receive ad-free pages from us. Look for an announcement of that soon. Also, if browser games are all you're interested in, there's a tag for that: https://jayisgames.com/tag/browser -Jay]

Interesting as this game was I couldn't help feeling a bit creeped out that its only socially redeeming value was targeted at something like, uh,..."Base your life on Ebenezer Scrooge or Charles Montgomery Burns, desire to live forever, desire to become a vampire, have a kiss-ass toady employee succeed in making this happen, retain your wealth & evil personality, and win the game". Yeah.

Family Guy hasn't even touched this meme, and that's saying something right there.

Finally,a game that made me feel like I got my moneys worth!I love HO games,but lately most have been the same old thing.Vampireville was pleasing to look at,the voice acting was good and there was enough new twists on old puzzles to keep it interesting.I really enjoyed playing.It was also a relief to get through a game without having to resort to "cheats".Hard enough to be interesting,but not so hard as to make my brain hurt.

Chapter 3: In The Boiler Room

Message reads: "Get out, or else! Black Macho"

Chapter 8: Discoveries From The Master's Book

Chapter 13: A New Plan Of Action

Chapter 15: Down In The Basement

Chapter 17: Up In The Attic

Chapter 18: A Trap For Brandon

Well done!!! Loved this game...not only for the play value, but the truly stand out characters & the great humour!

How do you light the match?