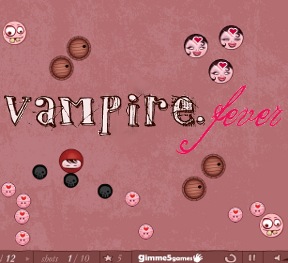 In every generation there is a chosen one. He alone will stand against the vampires, the demons, and the forces of darkness. He is... the ninja virus delivery system known as Viro in Vampire Fever, the physics/puzzle game of billiards and ghoulies from Umut Dervis. ... what? You were expecting some petite blonde chick or something? Pfft. It turns out that when nightmarish nasties are on the prowl, who you should call is Viro, a ninja capable of spreading a deadly virus through touch that can dispatch the baddies with ease. Just as long as you're good at shooting pool.

Curing the undead is a pretty simple process at first glance. Click and hold on Viro, then pull back to select the angle and power of your shot. When you release the button, Viro will go flying. Any healthy creatures he comes in contact with will become "infected", and you need to infect them all to pass each level. An infected creature will transmit the disease to any healthy monsters it touches, but if two infected touch, they cure each other. You only have a certain number of shots to pull this off. There are 120 levels to hone your monster-mashing skills in, along with a special challenge mode, and a level editor to create your own challenges.

120 levels is a lot. Like, a lot. I almost feel as though Vampire Fever could have been half as long, and been better for it. A large chunk of the levels feel like unnecessary padding, and you can go quite a while before you see a new creature or obstacle to change things up. And while some of the those creatures do force you to think strategically, inevitably most of us will probably fall back on that old stand-by "wildly firing off in every direction and hoping for the best". Still, the game is undeniably charming and clever, with a unique take on the game of pool that will definitely test both your skills, and your skillz. If the adorable aesthetic and quirky presentation woos you, you'll probably enjoy every victory as you conquer that massive edifice of physics/puzzle goodness. Just hope you like pink.

Sorry if I hurt some fanboy's feelings, but isn't the whole "Physics" gimmick in these flash games getting a little to repetitive. Come on game designers, be innovative and use SOFT-BODY PHYSICS! At least it will be more entertaining than this stuff...

I don't like how slippery it is. With the un-infecting thing, it made the few levels I played simply frustrating.

There really isn't so much puzzle solving, either, at least at the beginning, before I got tired of it. It's just hit some, and hope they don't slide all over and uninfect each other until you run out of points. it isn't like you need to have some special trick to clear them.

I think a game like this would be better to not have a limited number of shots, but instead use a base score for each level, then you lose points for every shot you take. It would allow you to effectively "skip" a level by playing until you solved it, but receive no points.

This reminds me a little of Homeopathy.

-A little infection can hurt. But a lot can cure you of it.

It's basically trick pool, only with vampire(ish) faces on it. Controls are slippery and the constrained area diminishes the experience significantly; I don't like how the game expects me to constantly drag the pointer AWAY from the game area. Also, everything moves so fast it's really difficult to make some meaningful moves.

All in all, I find this to be a little bit on the amateurish side. Then again, judging by the number of levels AND the fact that it was deemed worth to be featured on JiG, I guess I missed the point somehow.