Originally only available for Playstation 3 and now finally ported to PC, Sega's Valkyria Chronicles is a meaty turn-based strategy RPG that follows the brutal and bloody war between East Europan Imperial Alliance and the Empire, who have been clashing over the availability of a mineral called Ragnite, right before it involves the previously neutral Principality of Gallia. At the start of the game, a young man named Welkin is returning home to the tiny village of Bruhl in Gallia just as the Empire (it's always an evil empire) is about to declare war on Gallia to seize the Ragnite deposits. Neither Welkin nor his adoptive sister Isara are soldiers, despite both being descended from well-known war heroes, and new town watch captain Alicia has more experience baking bread than she does holding a rifle. They're about to learn, however, that sometimes you don't get to choose whether you get involved. Driven from their home and conscripted into the Gallian military, Welkin and his friends believe they'll be able to return home one day... but will they recognise the town or themselves when they do? With a deep story, likable, human characters, and compelling, challenging battles, Valkyria Chronicles is a cut above the rest in almost every conceivable way, with a PC port that doesn't cut corners. Also, I expect some sort of prize for going this entire review without once calling it Valkyrie Profile, which isn't easy to do when you're old. Where's my rocking chair? Get off my lawn!

Love to play games? Of course you do. Want to play games and earn sweet rewards doing it? Of course you do, and take that, mom, for saying games never get you anything! Playfire Rewards BETA is a free program that allows you to link your Steam account and earn cool rewards like store credit through our affiliate partner, Greenman Gaming, just for playing! Check out the F.A.Q. to learn more, or sign up to start earning! 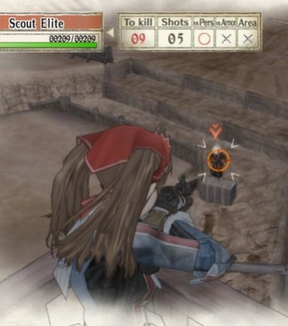 Gameplay in Valkyria Chronicles consists primarily of commanding your soldiers in turn-based battle against enemy forces, where the conditions for success and failure can change depending on where you are in the story. Rather than each character in your party being able to move and attack only once per turn a la Final Fantasy Tactics. Instead, you have Command Points that you spend to move and act with whichever character you want, but the catch is that each time you do so with the same character more than once in a round, they "tire", so the amount of time you can control them is shortened. When you assume control of a character, you move them around the field (while enemies take pot shots, no less!), and you can hide behind cover or attack if you're in range, taking the time to aim your shots. When you target an enemy, a bar will appear above them showing how many times you'll fire, and also how many shots you'd need to take to kill them, how effective your chosen weapon is, and so on. Make sure you take all that into account, since if the enemy you attacked isn't dead after you fire, they'll get to counter-attack! 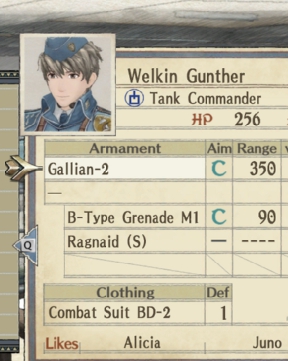 One thing to remember is that while you can use all your Command Points, if you don't use them, they'll roll over to the next turn, allowing you even more chances to move your characters. Once you've used all your Command Points, the enemy gets to take their turn the same way. Your characters will automatically fire at anything that comes within range, and get a chance to counterattack any attack made on them as well. Just make sure to use your time and cover effectively, since a character that is knocked down to zero hit points and doesn't get rescued, either by sending someone over to help or calling in medics, will die permanently and be gone from the game. That's right, we're rolling in Fire Emblem style, y'all. More than just people, you'll also have other equipment at your command.

Shortly after the first few chapters you'll gain access to your headquarters, where you can manage your group, buy upgrades for equipment, and perhaps most importantly, recruit new soldiers. While the soldiers available to recruit after each mission are randomly selected from a pool of characters, all of them have different traits in addition to different classes. Snipers, engineers, and shock troopers, sure, but traits that provide passive effects in battle. Loyal Teammate makes someone stronger when they're surrounded by allies, for example, and being Strong Willed means someone can barrel though enemy fire while moving and take less damage. Not all of these traits are good, and some of them mean certain characters are better in some situations than others. The experience you earn from battles can make your characters stronger by spending it on the Training Grounds... instead of leveling up characters individually, you level up entire classes at once, and doing so can even unlock new character traits. You'll find even more things added to your headquarters throughout the game.

As a game originally released on console, happily Valkyria Chronicles makes the transition to PC almost flawlessly. It's got controller support, but the keyboard controls also work surprisingly well. At its most basic, you move during combat with [WASD], with other actions being tied to onscreen button prompts (attack is [E], for example), and when in firing mode you can fine-tune your aim with the [arrow] keys, but all of these are fully customizable through the configuration menu before you launch the game. 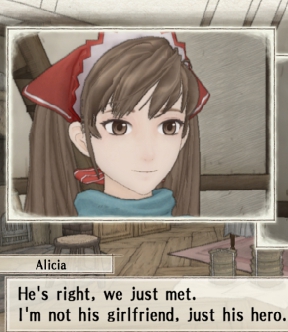 Analysis: When you're not directing troops or managing them, you're watching cutscenes, so it's fairly crucial that Valkyria Chronicles have a good story if they're going to limit our involvement to watching Anime. We've talked before about why stories that deal with war on a personal level are important, such as with This War of Mine. Games like Valkyria Chronicles succeed because they bring war down to a human level, turning faceless units to people who are brave, but also afraid and fallible. After your very first battle, the tutorial stage, Alicia is visibly shaken by the sight of the dead enemy soldiers Welkin and she have slain, and while she insists they be buried, she also promises that she will do whatever she has to, even kill other people, to defend everyone else. She's willing to make that sacrifice, even though it clearly pains her, so someone else doesn't have to. It's a short scene, but a pivotal one, and it tells you a lot about her character as well as being one of the best and mostly subtly executed "farewell to innocence" scenes you could hope to see. Sadly, this rarely extends to the Empire, whose soldiers are almost cartoonishly evil, mocking a terrified pregnant civilian who has gone into labour for being fat, making racist remarks, causing wanton destruction, and generally jerking it up. Of course, you usually want to feel justified in hating the villains of any story, but it shouldn't feel like the lion's share of their troops were personally trained by Kefka. 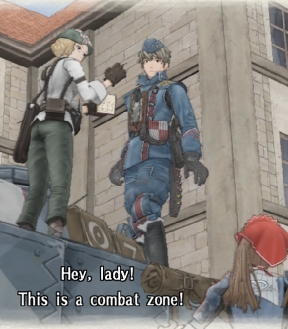 As the main character, Welkin grows on you the more the game goes on. While initially he comes across as bland, he endears with his determination and his more mild (compared to other RPG protagonists) optimism and good nature. He compliments Alicia by telling her how strong she looks, which she likes, but doesn't understand why she doesn't like then being compared to the rhinoceros beetle... hey, he points out, it's the KING of insects, who wouldn't want to be compared to that? Valkyria Chronicles is great at balancing its more serious scenes with moments of warmth and levity, but make no mistake, it means business when it comes to its combat. Battles can be very long, and the odds are almost always stacked against you in such a way that each fight becomes a puzzle of sorts. Being able to . Less welcome is steering tanks, which seem to get caught up on terrain a great deal if it isn't perfectly flat... understandable, maybe, from a realism standpoint, but incredibly frustrating from a "you told me to send my tank through this alley and now it's caught on a two inch incline" standpoint.

Any initial control kinks are forgiven in the face of the game's long running time and bounty of satisfyingly challenging missions and side-missions. If you're a strategy RPG fan, you'll find it meaty in all the right ways with its troop customisation, unit types, and well designed mission maps. While Valkyria Chronicles comes down more on the heroic side of the depiction of war, it's still a game that doesn't hold back when it comes to depicting the consequences of it, especially not the emotional or mental ones. It's funny and light when it needs to be, and pulls no punches when the situation calls for it, and with its lovely watercolour palette it's easy on the eyes, too. If you're at all a fan of the genre, do yourself a favour and check out Valkyria Chronicles. It hits all the right notes and is worth every single penny.

I like seeing this kind of review on here! If I hadn't already decided to buy this game earlier this week during the Steam Sale, this would've convinced me to pick it up.

It's really fun, and the blend of strategy and third-person shooter works extremely well. I love sneaking scouts around the battlefield and surprising the enemy by shooting them in the back.

One of the best games on the PS3. The gameplay doesn't just hit this sweet spot between strategy and shooter based, the whole game seems to sit at just the right place. The difficulty is just right. The music is used sparingly and to good effect. Large, long multiple character battles are contrasted with quiet sneak missions. And then there's the overarching pastel art style that blankets a pleasantly told, but serious, war narrative.

The whole game feels like an exercise in balance. Glad more players will be able to experience it through the PC port and especially Steam.

*Also this review was incredibly lucid, descriptive, and well-written. Maybe the best one I've read on here so far.