Usually when your ship sinks right in the middle of a titanic battle, it's game over, but in EndlessFluff Games' indie metroidvania action RPG Valdis Story: Abyssal City, it's just the beginning. Instead of drowning, you find yourself in a vast underwater city whose inhabitants want nothing to do with you, but since the demonic army you were battling is down here now too, along with angelic forces who don't care who gets caught in the crossfire, it looks like this is your fight as well whether anyone likes it or not. Play as either Wyatt or Reina (and more heroes to come!) each with their own unique weapons, skills, and abilities as you search for your missing crew and a way to end the war between two equally deadly factions in this gorgeous adventure. 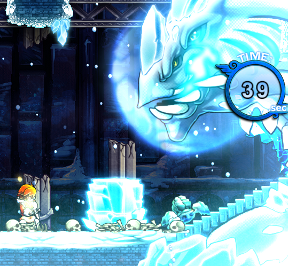 Like any metroidvania worth its salt, Valdis Story offers a sprawling environment for you to climb and leap all over, filled with secrets, unlockables, and upgrades you'll discover to open up even more of the map to you later on in the game. Your hero can use both melee and magic, and developing your own combat style by choosing on where to focus (or if you want to blend the two) is easy to do. You'll earn a variety of souls from defeating powerful creatures that you can equip to unlock their magical abilities in a variety of combinations. This, incidentally, is not a game for the button masher. As you play, you'll come across a wide variety of enemies that require skill and thought to defeat, or even just to get past their defenses. As you defeat enemies, you'll not only get stronger and earn points to spend on skills and attributes, but you'll find materials you can use to craft new items. When you find crew members, some of them can even be summoned for help during battle! 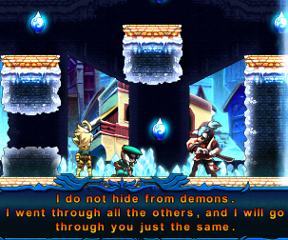 Analysis: Somewhere, in a perfect world, there is DLC where you can muzzle hero Wyatt's sullen, infinitely hateable mug, but even if you're playing Captain Miserable there, Valdis Story is still an absolutely stunning game. The distinctive art style coupled with the dedication to rich colours makes it a joy to behold without ever actually becoming too cluttered, so its pixels are always crisp and the action is always clear. Some areas sport more interesting design than others, with a lot of interior maps tending to fall into dull, flat corridors and rooms, but the pros definitely outweigh the cons. The story winds up feeling like it's secondary, or even third-ary, to everything else, largely because unless you read the game's lengthy backstory from the "lore" screen, you'll have no idea what's going on for a long time. Not that you need to, really, since the game is less about talking and more about being a punching, back-flipping, sword-swinging, magic-flinging hero.

Though primarily combat oriented, Valdis Story has a heavy emphasis on platforming that I could have done without, which I know is a weird thing to say about a metroidvania title, but there are just so many itty bitty platforms to cross and wall-jumping sequences where enemies are hacking at your ankles or vomiting projectiles. Although the controls are largely pretty responsive, the heartbeat-brief pauses that happen from flourish animations when finishing attacks or spell casting are enough to get you face smashed in by an enemy, or even miss a precious second off of the timer you just activated. This is somewhat exacerbated by the fact that you'll learn a lot more experimenting with the controls and skills on your own than you will through the instructive in-game text, which offers explanations that do little to enlighten or instruct beyond the very basics, and can actually wind up being confusing. Swapping around spells feels unnecessarily clunky and even a little unintuitive at the beginning, with different options available for each directional casting button for every sphere. There's also so much screen space you may really lament the lack of an onscreen mini-map, which would have been a simple addition that could have streamlined the whole experience since so many areas look alike. 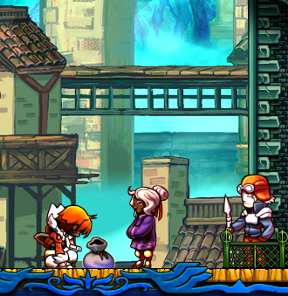 That said, however, there's still a lot to recommend about Valdis Story, and its gameplay and combat are engaging and fast-paced. This game loves its boss battles, all of which are unique and exciting and challenging to boot, with a welcome option to immediately retry if you fail instead of getting booted back to the last save point. Once you get a handle on how your character controls and the way their abilities work, you'll fall into a natural rhythm in combat, chaining together massive combos and juggling multiple foes at once. Each map is packed with places you'll have to come back to when you learn new abilities or gain new items to gain access to more treasure, making it a dream come true for completionists.

Valdis Story: Abyssal City isn't perfect, but few games are, and despite its flaws, it's still a lot of fun and something fans of classic metroidvania action will want to check out. It's easy to pick up, if someone difficult to master, but the gorgeous visuals and engaging action make this one worth the effort if you enjoy the genre.

I've gotten a little bit into the game now, and it is pretty entertaining. It's definitely not perfect, especially when it comes to the wall-jumping - but its still a good game overall - I'd give it a 4/5 as it stands now.

The wall-jumping aspect, I'll clarify that. Many times when you try to grab a ledge and lift yourself up you will wall jump away from it, because wall jumping can be done just by pressing up against a wall, not just by pressing away from it. This can be a real pain in timed areas, one in particular in the ice area to get a chest. If you can get past this issue, its a decent game worth checking out for its low price.