Undo. Unwind. UnLink. Pick up your mouse and chill out a little with this puzzle game from FOG Games. It's a classic style of brainteaser that many of us grew up with: You are given an object made up of many smaller, interlocking pieces. Although they appear to be tightly tangled, they can, in fact, be neatly undone without breaking any of the parts. Here, the cavalcade of objects is rendered in lovely 3D, and you get twenty-three of them for the tasty price of free instead of paying fifteen bucks at the state fair for one hand-carved wood puzzle that'll mostly just sit looking intimidating on your mantelpiece. Grab and pull pieces with your left mouse button, and use the right mouse button to rotate the shapes for a better look at them. And don't sweat the small stuff. There's a hint button waiting in the wings, ready to offer you advice and to reassure you that "everything will become clear." What a sweetheart! 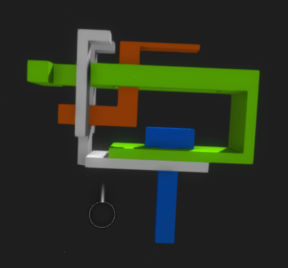 It's a classic puzzle style, but this isn't the first time it's been put to code and data. In fact, puzzle fans will notice that there's a lot of similarity between UnLink and another 3D puzzler known as Interlocked. Both only allow you to move the blocks in straight lines; no twisting or turning these pieces! Both also use a charming, soft minimalist aesthetic that makes them rather relaxing. What makes UnLink stand out from Interlocked is its approach to the puzzles themselves. Whereas Interlocked favors blockier, more symmetrical structures to disentangle, UnLink has wilder and more abstract shapes. Not only does this mean you'll need a different approach, but it actually makes some puzzles a bit more logical! It's clearer how the different pieces are stuck together, making it easier to figure out how to pull them apart. Plus, there's just something pleasing about the cut of UnLink's jib, and the soothing tone of voice it adopts in its hints. It's like talking to an old friend as they try to cheer you up after a bad day. If nothing else, it's a puzzle idea that's stood the test of time in the first place. More of the same is sometimes a very, very good thing.

I can barely stand the oversensitivity of the controls. I click and drag a piece just a little and it slides away like freshly oiled ice. It makes precision nearly impossible.

Level 21: Moved green and white pieces, as stated in the hint, but unable to free red piece, because the gap in blue piece is a couple millimeters less than is required. Am I doing it the wrong way?

From your picture, you shall move the white one all the way right, and then towards the background. You should then be able to free the white block by moving it down.

Not bad, but in my opinion inferior to Interlocked (mobile version).

I'm being a bit picky on the puzzles, but that's probably only because I own several physical puzzles of a similar nature (but not those cheap ones from game shops) which have simpler shapes but higher complexity of solving.

@THEGREATESCAPER: When I was a wee'un, my grandparents' next door neighbor was a woodworker who often turned his pieces of scrap wood into puzzles like these. He gave me several, as well as a train whistle that drove my grandparents nuts! Nice to know someone else enjoys them.

Me, I may have been swayed into liking this by the fact that these are a lot easier than the ones my grandparents' neighbor made and have a built-in hint button. Ahem. ;)

Whoops, 'in inviting' should be 'uninviting'

@Ally
By complexity, I kind of meant an elegant or surprising solution... I even have a couple of designs that require rotations with all rectangular pieces!
Most of the puzzles here, if made physically, would either fall apart quickly, not hold their final shape well, or just look ugly. That's not saying that they don't work on a screen; in fact, the contrary is true, with these puzzles working well on a computer/idevice.
I'm glad to know the age of puzzling isn't over; if only I had a generous woodworker living near me... it would make puzzling a lot easier on my pocket! :)

I had a hard time with the rotating/zooming and it seemed a bit klunky. I realize it isn't easy to translate 2D input into action on a 3D object, but if I touch one of the pieces I expect it to move a little even if it's locked up by other pieces. Instead, there was no feedback, like I'd done nothing. I had to rotate the entire puzzle (not so easy either) into a direction where there would be no question I was swiping the piece left or right.

At one point it also seemed like the rotation flipped so when I swiped right, the puzzle would rotate leftward, and that really screwed me up for a while.

I kept thinking it would be much easier to do with physical pieces in zero gravity.... the tl;dr is the interface gets in the way of the puzzle solving.