Zombies and Cheepies and Succubbi, oh my! It's so tough being a landlord in the mythical 21st century. Not only do you have to contend with groups of creatures who can't stand each other, but everyone has demands from the cost of rent (when they actually pay) to ammenities in their apartment. On top of that you have groups of adventurers who have nothing better to do than ransack your building to steal your hard-earned money. Oh, did I forget to mention that you're the Devil? This kooky storyline is the genius behind Petit Depotto's simulation/defense hybrid, Unholy Heights. Be you a hard-nosed landlord forcing large amounts of gold our of your tenants or a more gentle one who gives into their every demand doesn't matter as long as they fight your enemies at your every beck and call. And they will. Because they have to. Because you're the Devil, after all. 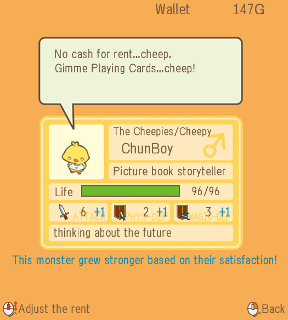 The controls for Unholy Heights are very intuitive. At the simplest, you left click to select something and right click to go back. And, very importantly, you use the scroll button to raise/lower a tenant's rent while their room is selected. There are various buttons along the bottom of the screen, whether you want to open the menu or have two tenants exchange rooms. If you want your click to only be able to select certain types (useful in a crowded fight) or to change the game speed, those buttons exist too! While the game can be played solely with the mouse, these handy buttons are also tied to keyboard shortcuts.

This game is all about the tenants... and as a landlord, shouldn't it always be that way? There are seven groups of creatures and four character types within each group. They will (somewhat) randomly come up to the quest board outside your building that doubles as an ad for open rooms. Depending on what rooms you have available and how much the rent is set at, they will either ask to live at your building or leave. Or, if your residents are well off, they may even become a lover for one of them. There are many benefits to this for you since this increases the number of fighters you have per room, plus, if they're lucky, they may produce a child that will eventually grow up into yet another fighter. You're literally 'raising' an army.

And what is that army used for? Why defending YOU, of course. After accepting a quest on the aforementioned quest board (or about once a game day when no quest is selected), devious, greedy adventurers and heroes come to steal your gold for their own spoils. To keep them at bay, knock on your resident's doors to get them to come out and defend the building, if they're home, of course. After all, a demon's got to work to pay the rent. With units that have a variety of ranges, from melee to a 'super' ranged weapon that flies through enemies to damage all it hits, the real strategy of the defense portion of the game comes in choosing the order you come a-knockin'. Having all your ranged defenders grouped in the back of the line will do no good if they can't hit the enemy. 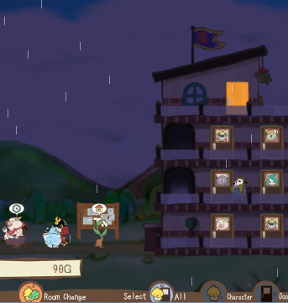 Analysis: For such a unique combination of genres, Petit Depotto got a lot of things right in Unholy Heights. While each aspect, when looked at individually, works well on its own, in order to be successful at the game, the two have to meld together in harmony. Happy residents make happy defenders. Fans of both defense and simulation games will find enjoyment in this experience.

While the overall experience is solid, the game can get a bit 'grindy' in the sense that there are times you're running the game at the fastest speed just waiting for your residents to find mates in the hopes that you'll finally be able to defeat the one quest available to you. But there are certainly enough cuteness in the graphics to keep you entertained as you wait, from the celestial facial expressions to the wide variety of creatures who wander around your place. The details given to your residents' lives, including: job promotions, interacting with the accessories you purchase, or even sneaking away at night to to avoid their large rent debt, give more depth to the experience of the game than you may expect. It's enough to warrant a quote from the creatures themselves: "This room game rocks......!"