If you grew up with the story of Thumbelina, you know her as a tiny woman who lived through many adventures before finding her one true love, the flower fairy prince who became her husband. What the classic fairy tale doesn't get into are the trials and tribulations she suffered after she found her prince. Fortunately Elephant Games has stepped in with a charming new adventure hybrid, Unfinished Tales: Illicit Love, and covered the gap after the romance and before the wedding, which of course is imperiled by an evil witch queen. Seriously, it's not a fairy tale without one. 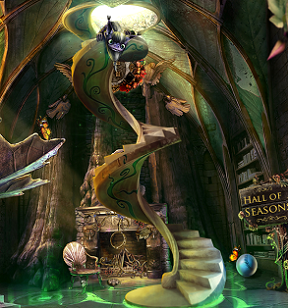 The action begins at Thumbelina and the Prince's wedding, which is interrupted by the attack of the evil witch in question. Playing as Thumbelina, you must navigate your way through a fairy kingdom now under the iron grip of evil while trying to rescue the hapless Prince from the witch's clutches. Interestingly enough, she claims that the Prince promised to marry her, and she's just here for her due. Is the evil witch delusional? Is she simply a wronged ex-girlfriend? Is the Prince a two-timing twerp? Or is something else going on, something even more wicked?

Thumbelina must gather her courage and wind her way through the kingdom and the castle in her attempts to salvage her wedding day. Navigation arrows, a grabby hand, a magnifying glass, or a pair of whirling gears are the icons that the cursor can change into to indicate areas of movement or interest. Friendly glints and sparkles of light highlight places you might want to give a second look, and a very helpful magic mirror (who is just sick and tired of lying to the evil witch about who is the fairest) tags along for the ride to provide helpful hints. The level of hints available depends upon the modes of play of which there are three: casual for those who like the hand-holding, Advanced for those who like a bit of a challenge, and Hardcore, for those who want no hints, skips, or help of any kind. 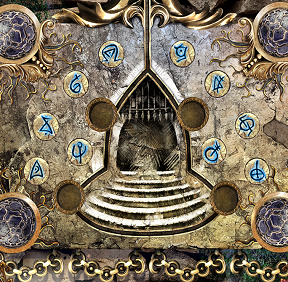 Unfinished Tales: Illicit Love foregoes the standard notebook to keep clues in as you wander through the world. Instead you have a very handy map that keeps track of current goals, shows areas you've been to, highlights places where things still need to be accomplished, and provides a handy way of moving from one place to the other without a lot of back-and-forthing that plagues many adventure hybrids. A bottom-loading inventory that slides down out of sight when not being used allows you to gather a plethora of items, all of which will eventually be useful. Armed with the hints and the assistance it is your job to help Thumbelina figure out what is going on and rescue her Prince before the wedding cake gets stale.

Analysis: Elephant games drops Unfinished Tales: Illicit Love into a very crowded market, fortunately armed with numerous features that make it a strong contender, beginning with the story of Thumbelina, the Prince, and the wronged Witch. Is the witch fighting for something that she doesn't deserve, or is the Prince a love 'em and leave 'em dawg who two-timed both women? That question keeps things interesting as the adventure unfolds. 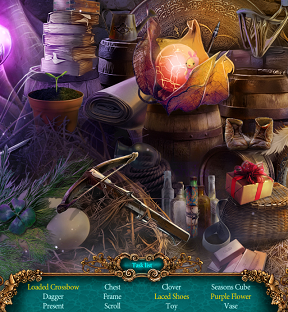 The first thing you notice when you fire up Unfinished Tales: Illicit Love are the stunning, glowing, fairy-tale graphics, enhanced with a multitude of little animated details that bring the flower fairy kingdom to life. You might need a high tolerance for the cutesy as the tale goes on, especially when you reach the castle gardens, populated with the most adorable baby animals seen outside of face book and various websites that don't know how to spell. Even the most jaded amongst us might sigh and say "Awwww, how cute!" when faced with this miniature menagerie.

The cut-scenes are tense and action-packed, the music is alternatively lyrical and bombastic depending upon the location. The voice acting and dialogue are a cut above with a few exceptions, adding to the entertainment value. The heart of the game, though, is the adventuring, hidden object finding, and puzzles that make up the backbone of the gameplay. The adventure aspects are for the most part well thought out, requiring a lot of logic, object finding, and puzzle solving. The hidden object scenes are rather sparse and nicely spaced so as to not interfere with the flow of the story. The puzzles themselves are a delightful surprise with a wide range of difficulty levels and many unique and original takes on classic logic problems.

There is one downside to Unfinished Tales: Illicit Love, and it is the fact that the story rather goes off track halfway through the game, with Thumbelina concentrating so much on solving problems for the kingdom's inhabitants that the main tale tends to get lost. And while the additional adventure included in the collector's edition is amazingly hefty and most definitely worth the extra price, Elephant Games has placed much of the resolution and exposition there, so that those who play the standard edition will never learn the whole story.

Unfinished Tales: Illicit Love provides intriguing, involving, gameplay wrapped up in an exquisite bow of sound and visuals, enhanced by some pretty decent story-telling. The choice of game modes should appeal to a wide range of adventure hybrid fans, as well as the engaging gameplay. Despite its flaws Elephant games has packed a lot of entertainment into this fresh take on an old fairy-tale.