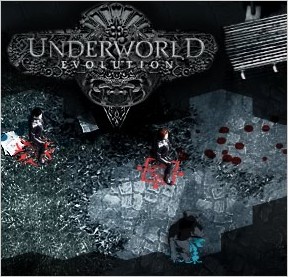 The Underworld Evolution game is played by aligning yourself with one of two teams: the lycanthropes (werewolves) in blue, or the vampires in red. After choosing a side, you choose a location for battle: City, Forest, or Ruins. Although each location appears different, there doesn't seem to be any reason to choose one over another except to go where the people are. When I played, everyone that was online was in the City, and no one was in the Ruins or the Forest.

Once inside the game you are presented with three (3) different modes of play: Deathmatch, War, and Missions. Deathmatch allows you to play against the CPU for practice if you like, or if no one else is available to play. War is melee combat for up to 16 players (8 players a side), and it seems to be the mode that attracts the most players. And though I haven't actually played through a mission yet, Missions appear to be two-player variations on the theme with the game providing goals that differ depending on the location chosen.

Regardless of the mode you choose, it is likely that your gameplay experience will be similar to previous games from BigSpaceship, as the company relies heavily on its turn-based strategy game engine and doesn't stray far from its core mechanic. In this latest iteration, a 5-second turn timer counts down and everyone takes a turn simultaneously. The computer then plays out each turn in succession as the players watch the events unfold. If you don't complete your turn in time, then you must wait (in place) until the next turn timer fires.

To move your avatar, click and drag to any square within the highlighted region that shows permissible moves. To attack, choose one of the small white symbols that appear near your avatar; a red highlighted region will appear showing the range of the selected attack. When all your health is depleted you die, but a trip out to the menu and back is all it takes to bring you back to life. The game keeps track of your kills and your deaths if you register with the site for bragging rights, if you are so inclined. Click.

Analysis: My experience with the interface was maddening. Too often my avatar would sit out its turn simply because I could not get the interface to do what I wanted. More than half of the time nothing happened when I attempted to move my avatar, and sometimes I moved the map instead (the map may be moved around by clicking and dragging in the same manner as moving your avatar). Also, it seemed, that all attempts to direct attacks toward my opponents were fruitless, and invariably would go off in some other direction where no one stood. This made the game play experience feel random and uninspired.

The game is still in beta so there is hope that the developers will iron out the kinks eventually. The multiplayer cooperative team aspect of the game is very appealing, and it could prove to be a lot of fun with some much needed improvements to the interface. And yet with all the Flash talent this studio has, it would be nice to see them move-on from these turn-based strategy games and try something completely different.

While playing and reviewing this game I stumbled upon a video of the folks at BigSpaceship talking about their experiences developing with Flash 8 while they were making this game. Click.

Try again! Jay--dumb question--how do I delete something from my favorites list so that I can add something else?

You have to go to the favorites page (using a browser other than IE):

Once there you can delete any of your favorites by either shift-clicking on the one you want to delete, or dragging it to the right side of the window, anywhere over ther other icons.

I get that this is a RTS and that they have generally layed out framework and this one is still in beta.... but that doesnt excuse the fact that unless your attack travels at an angle or you get alot of skill glyphs you cannot attack anything below you. You should be able to rotate the attacks and I see nothing for this in the controls. To top it all off, if youre new the 5 second timer doesnt even give you a chance to check each of your skills.

Hi Bob - yes, the inability to direct attacks where you want was extremely frustrating, and the 5-second timer was too short to be very effective in combat.

With that said, I would worry that a longer timer might negatively impact the perceived pace of the game.

I agree with your observations except for the RTS part: the game is a turn-based strategy, not a real-time strategy game.

With that said, the two-player missions may feature RTS-like gameplay, since each player commands a team of 4 computer-controlled characters. But, so far, I have been unable to find anyone with whom to try it out.

There seems to be a huge preference for vampires as opposed to Lycans.

Has anyone figured out a way to log off without closing the game window?

Sorry, my mistake; Its easy to mix acronyms. The delay issues that might come up if the timer was lengthened probally wouldnt be as bad if the game handled each move one at a time, immediately after player input. It might be a little stop and go, but everyone would at least be on equal terms that way and can better plan their moves.

...why do werewolves have to be so fugly?
...that was confusing and slow...I ended up with about 2 seconds a turn...meh
back to AC, lol

I think it just might be my computer, but does anyone else have to wait forever for the game to connect...? I've waited like 15+ minuets for it to connect but nothing happens. It looks really fun and I'm bored now. That just makes it even worse ^_^.

Random Bob - interesting idea, though I wonder if doing so would give an unfair advantage to the quicker players, or those with faster computers. As it is, I believe the turns are randomized following the turn timer to keep everyone on the equal.

Conqueror does this and it is a welcome feature to have.

InsanitySmiles - are you still having trouble connecting? I just tried and was connected immediately. Maybe they had the game down for updates when you tried?

DIKIDI - cheers! but I'm concerned about why you are having trouble. I am going to send you an email so we can take this offline, as it is a bit off-topic.

Perhap's I can help answer some of these questions, as I'm actually One of the gamer's that stays in this game for quite some time at night.

To answer the first question, It does take time to "load" the game when your either logging in the first time, Or if your logging in and go straight to war.

to log off without closing the game window simply press the refresh button on your current browser.

attacking anything below you? The game is half skill and half strategy.
And a little luck doesn't hurt either.

To extend the timer by a few more seconds, would dis-assemble the challange of clicking the arrow's or moving with your mouse. It would defeat the purpose of the challange that is there.

Now, there is one place where you get a ten second timer. And that is on the missions.

hey this game does not load at all. it takes a lot of time to load . it has not at all finished loading for me . can i know the reason for this severe delay ... please tell me how to speed up the loading

Hi faisal - I tried and was able to load the game and play. There were also many other online playing, too. Yes, the game took a bit to load, so be patient. If you're not in the US, then it might even take a bit longer. Cheers!

hi i only have one cheat code and it is

What is Michael's profession before he becomes a Lycan?

iv tryed all that i could think of,doctor,intern,nurse.
i need help iv been looking for over 3years to the answer,please.

The last code is dr..as michael corvin was a doctor...enjoy.

what is the last code?

can you give me a character that is level 4 lycan or vampire,because i try difficult on how to level up my character. hoping for your kind and consideration.pplllllllllssssssss

or level 3 lycan or vampire

wher to find the game, because the site says it is no longer available.

The gamis is no longer available. This is an error with me or the game was disabled? i love this game too much

This game is no longer available. Does anyone know why? I used to play this game a while back.