Everyone knows the most important things you need for a zombie apocalypse are a zombie crushing tank, unlimited ammo, and a sweet, stylish hoody. Thankfully in Gamaga's UndeadRun, you have all three. Run down the street, avoiding the undead, and dodging out-of-control cars, while trying to scoop up coins and power-ups in this zombie shoot 'em up game that was originally featured in a Link Dump Friday. As previously mentioned, this game stands out from the normal genre of zombie games as it contains an amazingly zero amount of blood. It's just adorable, blocky zombies easing their way towards you only to be blown into bouncing little cubes. Oh and coins. Those are important as you'll need them for the upgrades that will help you achieve your goal of killing all three of the zombie bosses. 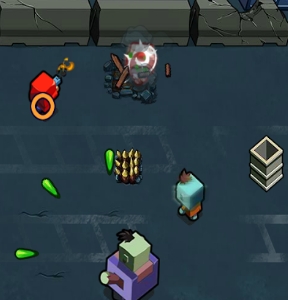 In this simplistic, yet agreeableaction game, you play by directing our hooded hero around the screen with your mouse trying to keep up with the scrolling street. He fires automatically at what ever zombie is close to him. You'll need to keep that in mind as he'll chose to fire at zombies who are not any threat over the ones charging at you head first, because the slower zombie who has already gone past happens to be a bit closer. So plan your flow across the screen carefully to avoid being over run. Also, someone before you thought it would be a good idea to put up spiky barriers to stop the zombies. What they forgot is that zombies are immune to wooden spikes (they must have confused them with vampires) but you, being a fleshy human with a heartbeat, are not. You must dance across the screen like a skillful ballerina to avoid all these nasty traps, and picking up one of three types of power-ups. There are the double guns, the broadsword, and the fire suit. The melee power-ups let you run headfirst into the enemies without any punishment. The only thing that can hurt you is the spit from one of the bigger zombies. Come to think about it, this game has a thing with 'threes'. There are three types of zombies, the walkers, runners, and spitters. After each round, they just gain more health and speed. Because of this the game can get slightly repetitive, but that's alright because even with all the upgrades it's up to you and your reflexes. So, simplistic? Yes. But who doesn't need a little simplicity in their day? Especially when that day is filled with zombies.

Played this before, probably deserved an individual review. Actually I played it again a few months ago. Entertaining.

Pleasant little diversion, right up until the final boss. There needs to be one more upgrade to make the final boss beatable-- as it is, I've had all the upgrades, have gone against the last boss multiple times, and now it's not even rage-quit...it's just "eh -- I'm done"

It doesn't save. My Flash plugin crashed for no reason (nothing to do with the game, it does this all the time) and when I came back I had to start over. I was almost at the last boss too.

Sorry to hear about your lost game Leopardmask, but it seems to save fine for me. Are you allowing cookies to be stored? Ir do you have it set to wipe cookies every so often?
Other wise I'm not sure what would cause it to lose your data.

At least allow flash save for the site if you want to save the game progress.

The last boss is beatable. You just have to get out of the way. Managed it with a touchpad twice.