Shoot first, ask questions later. Actually, skip the questions and just shoot some more. Created by Puppy Games, Ultratron is a giant neon dose of bullet-filled arcade action, taking a simple Robotron-esque shooter and dressing it up to the nines with slick, stylized graphics, plenty of upgrades and a blasting techno soundtrack. 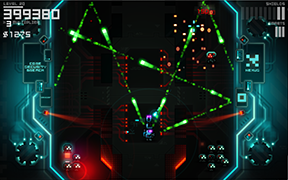 In Ultratron, you control the last remaining humanoid battle droid on a quest to destroy all robots and avenge the human race! You move your character with [WASD] or the [arrow] keys and use the mouse to fire. Or, if you're using an Xbox 360 controller (which Ultratron supports), simply move with the left joystick and shoot with the right. Each level tosses you into a battle against wave after wave of mechanical baddies, and your only objective is to blast away everything in sight, collecting dots (money) and power-ups along the way. There are occasional challenge stages thrown in, requiring you to shoot or dodge a series of fast-moving enemies, as well as assault stages, where you're bombarded with the most annoyingly trigger-happy of enemies.

In between each level, you get the option to purchase upgrades and other accessories, including smartbombs, defense drones and pets that follow and assist you by mowing down enemies with bullets, lasers and rockets. (Truly, man's best friends.) The game's stages are segmented into 10-level checkpoints, with a big bad boss capping each 10-stage set. True to arcade form, each block of stages must be completed in one go — run out of shields and it's back to the nearest checkpoint to start again. Luckily, your score, money and upgrades are all saved at each checkpoint. 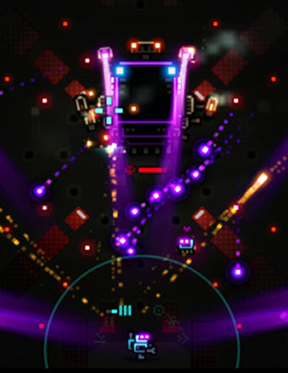 Analysis: Pew pew pew! Ultratron is an example of a classic arcade experience redone right. The Robotron: 2084 model is modernized and amplified, and the result is pretty darn cool. The upgrades are what really tie the game together. Coinage is just rare enough to make each upgrade purchase a non-trivial matter, especially when you're down on your shields and bombs and the next boss battle is looming ever closer. It adds a well-appreciated modicum of strategy to the mix, separating the game from the elder statesmen it draws inspiration from. Of course, when it comes down to it, skill and reflexes are the lynchpin to success, and you'll need plenty of both to make it all the way through.

This is not a particularly deep experience by any means, but it's a heckuvalotta fun. Ultratron is stylish and finger-bruisingly addictive, with sexy visuals and sexier action. While there isn't a staggering deal of variety in terms of enemies and scenarios, there's plenty of challenge and replayability, and of course, everything is drenched in neon eye candy. So if blowing up a metric ton of evil robots sounds like a fun way to spend a Saturday night, then this is one title you'll probably want to get your hands on.

Mac OS X Download the demo
Get the full version