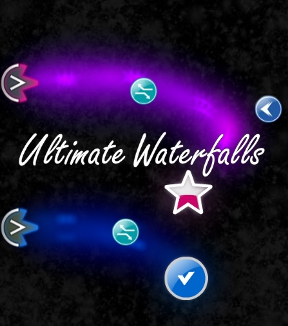 Since MoonMana's latest physics puzzler is called Ultimate Waterfalls, I sort of feel like I should be introducing it on the back of a flaming motorcycle, shooting off flare guns, while a lion plays a guitar-riff in the background, but... it... it's just so darned relaxing. Continuing the fine mellow tradition set by its previous titles, the game boasts lush visuals, a trance-like soundtrack, and a simple goal... fill up all the coloured orbs by directing the matching coloured particles into them. To do this, you'll drag various objects around the screen, such as reflective mirrors or teleporters, to get your shiny sparklies around obstacles and into the receptacle they belong in. There are no time limits. No enemies. Just you, some good vibes, and a relaxing sense of awwwwww yeah.

Play all the Waterfalls games:

Though you could never call it particularly taxing or a thrill a minute, Ultimate Waterfalls is that perfect sort of relaxing title that feels like the gaming equivalent of having someone stand behind you when you're stressed out and massage your temples for a bit. Or, uh... some less creepy bit of imagery. While it can be occasionally difficult to pick out streams of darker colours against the game's background that means this might not be friendly to colour-blind players (or even those of us who are less than eagle-eyed to begin with), Ultimate Waterfalls's lovely visual style and chilled-out mood are a welcome treat. Though the difficulty level sort of feels like it's all over the place and some stages require fast fiddling, the different elements add a clever bit of strategy over the whopping 57 levels to play. It's a simple, lovely little concept that is the perfect way to remind yourself to slow down and chill out on a day when you're otherwise rush, rush, rushing around. Admittedly I'm a little disappointed that a game with the word "ultimate" in the title is so chill... I mean, I rented this lion for the whole week just for this article, and you try returning a motorcycle you've doused in gasoline and lit on fire for a dramatic entrance!