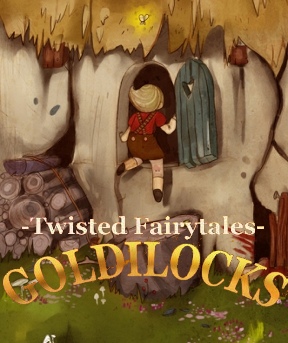 There was a little girl who had a little curl, right in the middle of her forehead. When she was good, she was very, very good, but when she was bad, she was... well, you know the rest, I'm sure. What does that old rhyme have to do with the familiar story we're about to embark on? Well, Twisted Fairytale: Goldilocks, a new spot-the-difference title, isn't what you might be expecting. Sure, you might recognise the titular adorable blonde moppet. But is our damsel in as much distress as she appears to be? Blending lush watercolour artwork with a dark sense of humour, this is one cute-but-off fairytale where you might want to put the kids to bed before you start in on it.

Gameplay is simple as pie. You're presented with two pictures that appear identical at first glance, but closer inspection will reveal small differences between the two. Click on a difference when you find one, and discover all irregularities in a scene to move on to the next. Depending on how quickly you found them, and how few mis-clicks you had, your score will increase as you go along. Can't find anything different between the two pictures? Goldilocks has your back with a hint system that comes in three flavours, small, medium, or large, and replenishes over time and with successful clicks.

Goldilocks consists of fifteen screens total to click through, or thirteen if you "opt out" of the story at a certain point. For the most part, the differences here are very well done, if a little on the easy side. No hunting for an ecru coloured pixel for you, my friend. While some of the differences come down to the stroke of a brush or a colour swap, you'll learn to spy strange little creatures lurking around, and here is where the artwork by Angi Pauly and Ecky Oesjady really shines. Rendered in gorgeous storybook style with muted colours, Goldilocks has some weird and adorable character design that looks like a fever dream after a night of Tim Burton, Maurice Sendak, and caffeinated drinks. Mix in a mellow, sly soundtrack and the whole thing is a quirky, tasty little treat for those of us who are a little, uh, special.

Less of a treasured childhood tale learned at a grandparent's knee and more of what you might get if you were inclined to go looking for your fairytales out of suspicious dingy white vans in deserted alleyways, Goldilocks somehow still manages to be a charmer despite a distinctively skewed presentation. Make no mistake, despite the Grimm subject matter (oh-ho-ho), Goldilocks has its tongue firmly planted in cheek, and will probably make you grin. Despite its short length and relative ease, it's just so well put together that it deserves a look. Despite the rating I've given it, the gore here is actually pretty tasteful (yeah, you heard me), but you still might want to keep the kidlets away and safely oblivious to what happens to mean ol' bears.

This was really easy, I didn't have to press the hint button once and on at least a few pages I noticed that there were more differences than I was required to find. Also, it was short enough not to lose my attention halfway through. Not a bad diversion for 5 minutes, but nothing groundbreaking.

Believe it or not, 'gore' was pretty much the norm for MOST fairy tales, before the Grimm Brothers started 'rewriting' them in a way for their general audience - they edited them a bit to tone them down.

Originally, fairy tales were NOT written for children. They were terrifying, bloody, and very, very darker. Darker than they're usually looked upon as.

@Alaria, @Dora: Title page says "More differences are shown than you need to find. The harder the difference the more points they're worth."

Hmm... I wonder what happens if you let Goldilocks escape. I suspected what would happen if the bears caught her, but it still gave me a nice feeling at the end (be creeped out- I don't care. I'm a massive fractured fairytale fan, and I think this is much more realistic than the original- a bear's house is likely to be covered in gore, am I right?)

@ LadyOfTheNight totally agree with your assessment of a bears house. I also agree that it's a cute, creepy little diversion. @Tim I saw that too, but then I forgot it when I played, still I scored pretty high (for the day anyway).

I'm a fan of the twisted fairy tales and the difficulty of the puzzles but this was super easy. It took me about 5 minutes and the ending wasn't that exciting and I did both.

I felt like the little ghost that I kept finding around in different scenes was my friend. Is he in every scene? It would be awesome if he was. I don't have the skill or patience to try and locate him throughout the game, but he was cute.

I notice that each time you play the different elements may be swapped over, and also that when you spot a difference it may be corrected in either direction. E.g., if there's a gnome on one side and not the other, when you click on it in one game maybe the gnome will disappear, but in another a duplicate gnome will appear on the side that had none. However, I cannot see any pattern to which way it happens and I don't think it affects anything else, so I think it's just a thoughtful little touch for variety.

Um, I get nothing but a blank white game window. Any ideas why?

No ideas. Works just fine for me on both Mac and Windows.

Have you tried all the usual suspects?

I figured out a way to make this game pretty easy

Cross your eyes like you're looking at a stereoscopic image.
You should be able to mix both images together and the differences will (quite eerily) stick out to you.

Some of the most creepy examples are the

color of the gnome's hat

Heh. I played through twice in a row and I'm having a hard time uncrossing my eyes, so take this advice with caution.

Wow. Beautiful. Exactly what a fairy tale should be.

And actually, it was not the Grimms who toned down the stories--Grimm Fairy Tales are pretty gory. It was the rewriters who came later who did that. The Grimms just recorded the stories that they heard (I taught fairy tales in English 101 at the university level for 5 semesters, and I've always been a fan).

@Shelby
Ah, thank you. I was wondering what that last picture was.

Wow that's what that last scene was?? I looked at it for five minutes and couldn't make heads or tails of it =/

That IS a bit of a twist I'll admit, but the final art needs a bit of work so that's it's actually understandable.

I was a bit disappointed by this as I was expecting the differences to be a bit more significant to the overall unfolding of the story.

Also don't bother playing the game twice to find out what happens if you let Goldilocks go...it just ends the game there

Most of you commenters are good, but Dora, you rock fully. Perhaps I identify with "those of us who are a little, uh, special," but also the lack of cynicism is refreshing. Just your review here of Twisted Goldilocks and Starlight endeared you to me because you seem "experienced" enough to have life recollections to call upon in your reviews which cause us all to reflect. I am thrilled to try both Goldilocks and Starlight. Keep up the good work.

I liked it. It was challenging without being annoyingly difficult. I didn't have to use hint once. I also suspected the ending but wasn't let down at all. It was a nice "twist". The art was very eerie.

For those of you that didn't understand the last few pictures:

apparently Goldilocks killed the bears. Notice how she looked evil in the last few pics and "full" in the last one.

OH. I thought the bears had KILLED her, & she was dead. No, the little girl EATS BEARS! Darn. I wanted to see that little twerp get what was coming to her...

i kinda prefer this goldilocks story rather than the original. i mean c'mon do little girls be friends with bears?????

1,002 Views
0 Comments
jayisgames.com— The popularity of e-sport tournaments is growing rapidly around the world. According to agencies and Newzoo , the viewership of such competitions already exceeds 450 million people, the market is estimated at a billion dollars with an increase of about...  ...