There are a lot of "educational games" on the iTunes App Store aimed at kids, and the lion's share of them make the mistake of assuming kids are simple. I don't even like kids and I'll tell you kids are only simple if you don't challenge them, because they will rise to their occasion, even if they make weird annoying sounds and their hands are all sticky. So it gives me great pleasure to say that Bossa Studios' iOS puzzle platformer Twelve a Dozen, which bills itself as designed "to support the curriculum of 10-14 year olds", is not just a good educational game for kids... it's a good game for just about anybody. And it's about math, and I'm supposed to hate math! Twelve a Dozen stars, appropriately enough, Twelve, a number who lives in the city of Dozenopolis up until it's destroyed by a bizarre calamity that leaves numbers and strange machines and debris strewn everywhere. Together with Dot, a sentient decimal point who will be Twelve's guide and narration, Twelve sets off to uncover the source of destruction and set things right. With beautiful, fluid visuals, just the right amount of whimsy, and clever math-based platforming puzzles that introduce new elements and challenges the farther you go, Twelve a Dozen isn't just an unexpected gem for all ages... it's an absolute diamond. 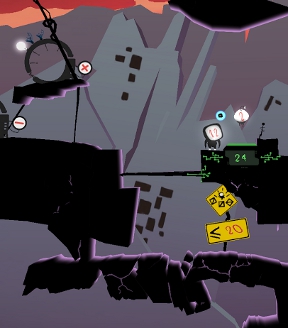 In each level, you'll need to change Twelve's sum as reflected on her head to get past a variety of obstacles, which is done by gathering stray numbles. Numbles have different values and don't do anything on their own but follow you around, so you need to find different machines to add or otherwise use their value with Twelve's in different ways, such as multiplication, division, and so on. These machines can only be used a few times, according to how many lit bulbs they display, so you'll usually need to figure out which ones to use, and in which order, and with which numbles. Stand in an active machine and drag the numble you want onto Twelve and watch her value change... for instance, a machine that multiplies will turn Twelve into a twenty-four if you drag a two onto her while she's standing in it. You'll not only need to match Twelve's value to certain pressure plates to open grates and meet the "weight limit" for bridges, but different numbers bestow different powers. If Twelve has a four on her face, for instance, (including simply four or, for example, twenty-four), she can push the heavy, grumpy creatures in her way, while a five lets her swim. Each level has a variety of checkpoints and dangers, but if you get stuck, just hit the rewind button until you're back to where you messed up. If you're really stuck, Dot also has a very helpful unlimited hint function that will lead you to where you should go and what you should do next. 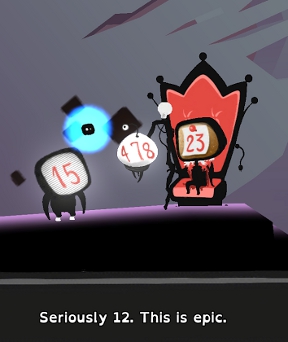 Twelve a Dozen is a game I tried so hard to be cynical about, but charmed me almost instantly. It's not just that it's cute and lighthearted, though it definitely is thanks to a narration that never manages to get annoying, it's that it's smart. Its core math mechanics are simple (combine the numbers you have in a way that lets you do what you want), yet they're presented in a very clever way that knows exactly when to begin dialing up the challenge. It's currently thirty levels long, with more coming as a free update, and the fact that it has no microtransactions at all (not even for its supremely helpful hint function) is sort of amazing these days. On the negative side of things, Twelve a Dozen doesn't really have much replay value to speak of, since its levels, cunningly fashioned though they are, have nothing in the way of secrets or surprises to encourage exploration, and whenever Dot falls silent stages feel a little empty. But its unexpected smarts and cheer make Twelve a Dozen stand head and shoulders above most other platformers out there, a ton of fun for absolutely any age, and one educational game every other to come after could stand to learn a lot from.

This game sounds great! Unfortunately, it only seems to be available for the iPad, not for the iPhone and iPod Touch as the review and tags indicate. :(

You're correct, and I do apologize! I accidentally wrote those other platforms in automatically since I'm so used to it. :(

3,654 Views
7 Comments
chrpa— Jayisgames needs your help to continue providing quality content. Click for details Hi, welcome to Weekday Escape! This week is a bit different - we've got two games from new devs (I hope they would give us more games...  ...