Monster slaying platforming action goes turn-based in Nitrome's Turn-Undead, where you play a cloaked and fancy hat'd hero (... Mare-Do-Well?) out to slay Dracula, as one does. [WASD] and the [arrow] keys move and jump while [spacebar] fires wooden stakes, but the twist is that there's a pause after every action, and time won't move until you perform another action. Jump, for example, and you'll hang in the air for a single turn (before falling the rest of the way to the ground), and fired stakes will travel one space ahead of you at a time with each step or movement you take until they hit something. You can hit [R] or [Z] to undo your last move, but if you're touched once, it's a dirt-nap for you. While your cheerily skulking average vampire can be rather spectacularly dispatched with a stake to the face, other enemies aren't so easy, such as the zombie, who will instantly reanimate on your next turn. You don't actually need to slay them all, however, just get to the exit, and nab the glowing golden cross if you want double points for doing so. 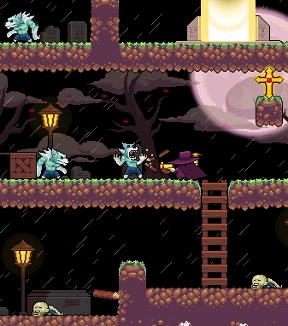 Turn-Undead is a great idea that is implemented a little awkwardly, or at least the way it (isn't) really explained is. You're left to your own devices to figure out the "rules", at least as far as how things interact with each other and how the finer points of movement work, and that trial-and-error can be frustrating rather than fun for some players. The undo function is only sorta useful in that you can't use it if your last move resulted in your death, instead being forced to restart the whole level from the beginning. You have to figure out for yourself that you can use your stakes as ladders, that most monsters are curiously okay with you standing on their heads, the way forward movement works when jumping... all of this is stuff that initially makes the game seem a lot more confusing because of its turn-based movement, but taken together as a puzzle game rather than the action dust-em-up it initially seems to be, it works. Dress it all up in Nitrome's signature gorgeous pixel style, and you have a game that still has a few bumps and might need some tinkering before you can take your training wheels off, but puts a clever spin on a classic genre with some bite and brains.

On level 8 - towards the top, how do you jump up two squares through the hole to get to the finish?

If I remember correctly,

you need to time it so that the zombie is under the hole, so you can stand on his head and then jump up again. This requires making sure he doesn't get out the open doors, since he'll fall off onto the ledge and you'll need to restart.

One of the greatest turn-based games of all time!

I'm not so inclined to believe that this is "Nitrome's best turn-based game" of all time. I'll admit the implementation is a little clunky, though it is interesting. It just feels like it didn't need to be turnbased, but whatever. That being said, it's probably the only Nitrome Halloween game I've taken a liking to so far.

Like for a while, I was stuck on the level with the doors because for some reason, I couldn't figure out how to open them. :? I dunno, I was under the impression that they were walls.

The music is good (as always). It doesn't play too well on Touchy though...I find myself pressing the undo button all too often.

It was great to have the extra challenge figuring out how to collect the crosses while leaving a more smoother difficulty curve with the normal puzzles. Overall, probably the best ? Nitrome Halloween game so far. (Numbskull was enjoyable too.)

I haven't played the game, but.. did you mean ne'er-do-well? "Mare-do-well" isn't something people say... unless it's a pun, in which case, my bad :'D