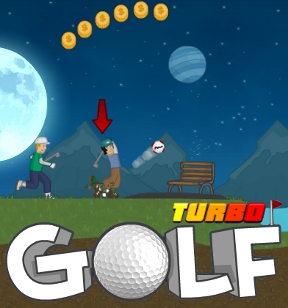 You know, as morbidly amusing as watching a man's hopes and dreams visibly crumble because of a little white ball rolling two centimeters to the left of a hole can be, golf isn't really what you'd call exciting. turboNUKE aims to change all that however with Turbo Golf, doing away with the slow, methodical approach to the sport and cramming it full of running, wild swings, upgrades, and more.

The goal is to get your ball into the hole before anyone else does, and to do that you'll need to hit it from one end of the screen to the other, running after it whenever it lands to belt it again. Aim your shot with the mouse, and click to fire when the power meter is where you want it. Along its arc, the ball will nab coins you can spend on better equipment in the store, but when it hits the ground your golfer will sprint up to it so you can whack it again. Terrain like sand traps and the rough will hinder you, but you can use power-ups once per hole to get a bit of an edge. When the ball is close to the hole, you'll have to put it in the same way. Of course, the other golfers are going to be doing all this at the same time you are, and the fastest one to sink their ball wins. I have to tell you, I'd watch a lot more golf if it were less polite clapping and more grown men stampeding around, flailing clubs and hooting like gibbons. But then I also say the same thing about American Idol.

Turbo Golf is exactly the sort of weird, chaotic wonderfulness you'd expect from turboNUKE, and though it can start to feel a little repetitive, it's also surprising how fun these relatively simple gameplay changes to the sport are. The course designs are fun and silly, rendered in the team's signature cartoonish style, and if you already enjoy golf games and aren't a stickler for rules it's also kind of compulsively playable. Turbo Golf does just enough to feel like its freshening the familiar gameplay up, and is packed with unlockables and upgrades to boot. So go ahead. Channel your inner Happy Gilmore and give it a little tap-tap-tap-a-roo.

with Chrome, at JIG nor at Kongregate I can start the game

I'm using Chrome myself on Windows 7 and have no issue playing the game whatsoever.

I had no trouble playing this in Chrome over at Kong yestreday morning.

It was disappointingly small, with only the two courses. I enjoyed what was there, though, so perhaps it will get really good if they ever do a sequel.

@mark.roeling ad blockers block a video ad that's running at the beginning of the game, which prevents the game from loading.

[Yes, that's right, thanks for pointing that out. We offer free content here, but it's all ad supported because my team does not work for free. -Jay]

What, no female golfers?

Fun game, addictive, but some control problems. Namely, putting on the green has some artificial difficulty as the "aiming" for the hole is very twitchy. Several times I've been way ahead my opponents only to be thwarted because of trying to place my cursor on the exact pixel to land the target in the hole.

Also, this is one of those games where the there is a trajectory that isn't stuck to the cursor. That means that on a number of occasions, while focusing on lining up the trajectory line, my cursor had wandered out of the play window, and ending my game automatically (my cursor always end up on some link button, for some reason.)

But beyond these gripes, I think this is a lot of fun, and would love to seem some expansions.