You know what your average, boring ol' tug-of-war game needs? A table instead of a rope. At least that's what Otto Ojala (of Wrestle Jump fame) thinks, and he's managed to turn the idea into Tug the Table, a simple yet wonderful little one-button fighting game where you play as a little blue person trying to pull an orange person across a line. 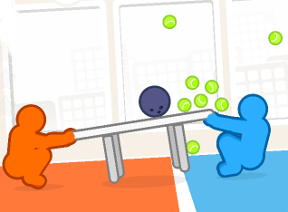 The idea is similar to Wrestle Jump: press the [up] key to jump up repeatedly and pull the table — and your opponent — across the line. The first player to win five matches wins the game. Each match has challenges that change the players' sizes and centers of gravity or alter the table and room. When that gets too easy for you, you can toggle "Hard AI" mode in the settings to introduce a smarter AI and more obstacles, or find a friend to play as Orange in the two-player mode. Tug the Table isn't deep or complicated, but it's a nice way to spend a few minutes. Really, it's worth playing just so you can do a weird, jumpy victory dance among the confetti after you win a game.

Maybe I'm just terrible at this game, but it seems to me like the AI knows exactly when to hit that button to get maximum leverage every time.

this game sucks the computer kicks ur ass every time even on easy mode.... I really liked it's predecessor wrestle jump but this game just pisses me off... maybe if it had an endless mode I would get the hang of it a little bit better but as is this game is just infuriating I wanna punch out that little red bitch every match... NOT FUN!!!! F-

I rather agree with the other frustrated comments but I did begin to win when I realized that timing is the key and hitting that button at just the right time when your player would have more leverage helped a lot! Still hate red though >:[

Man i love the game, i wish there are more of this 2 player challenging games where you can fight against your friend on the same computer. We usually play the game at this website in school.

3,153 Views
0 Comments
chrpa— Jayisgames needs your help to continue providing quality content. Click for details Welcome to the Roundup 34 with three games! As mentioned in the previous roundups, only odd-numbered episodes are featured since even-numbered are for Robin Vencel's patrons. More...  ...

3,066 Views
1 Comment
chrpa— Jayisgames needs your help to continue providing quality content. Click for details Welcome to Mobile Monday! After a few months, a new lovely Nicolet's game is out and you can return to their cute rodents' world. With APARTMENT BACON...  ...