When I was a boy, I used to love playing with marbles. I would always try to build towers using Lego bricks and tape cardboard tubes to the sides and make little pathways for marbles to go through. Eventually, I tried adding cups with balloons stretched over the opening to act as trampolines, and large funnels to catch wayward marbles. And my mother would always hug me and tell me that I would grow up to be one of the greatest Macroton experimenters to have ever lived. 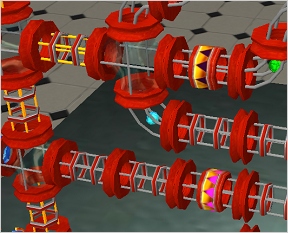 That's actually a lie. We couldn't afford the balloons. Rubber was expensive back in the War of 1983.

But if you've ever had a yearning to try your hand at Macroton manipulation, TubeTwist might be the game for you. As the winner of several prestigious awards (including a nod from the Independent Games Festival, among others), TubeTwist has continued to expand to the Quantum-Flux Edition featured today.

If the technical jargon used in this game seems a bit daunting, then try this quick explanation for size. Your goal is to manipulate the path of the Macroton (a colored marble-like object) from the Injector Tube (the start) to the Reactor Tube (the finish) using a variety of scientifically-designed tubes (er... tubes). Some tubes can add a bit of propulsion to your Macroton or even shoot them out like a cannon, while others can divert incoming Macrotons different directions, or even remove or restore a Macroton's gravity.

In each level, you'll find an Injector Tube and a Reactor Tube, as well as some pre-placed tubing and other devices (which all seem to float in mid-air, by the way). Click on the spare pieces in the tray at the bottom to pick them up (click multiple times to pick up multiple pieces, or click on the number above each piece to pick up all of that piece), then click on the grid above to place your materials. If you mouse over a piece, you can also rotate it, or reverse the direction (such as with Accelerator Tubes and other directional pieces). Once you think you've got everything set up so that all of the Macrotons will end up in a Reactor Tube of the same color, click the On/Off switch (in the lower right corner) to release the Macrotons and see your setup in action. If you're successful, the energy is harvested from the Macrotons in the Reactor Tubes, and you've cleared the level. Otherwise, hit the switch again to stop the action and try again.

But what is this energy we're collecting, and what is it for? Professor Jaymour asked you to join her in her laboratory where she first demonstrates the energy extraction process. However, the energy storage unit becomes overloaded and explodes, knocking you out in the process. When you regain consciousness, you see a portal disappearing, and a note from Professor Jaymour telling you she's taken the leap of faith through the portal. Your job is to rebuild some of her remaining experiments to collect enough quantum energy to open the portals she's traversed, and hopefully return safely the lab of Here and Today. 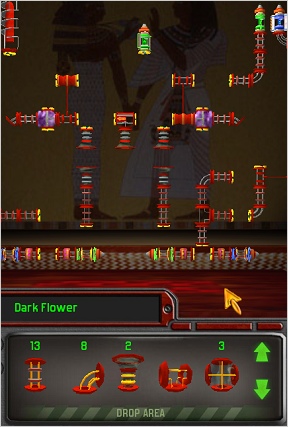 Analysis: Tube Twist's catchy 3D visual style, inviting music and sounds, close attention to detailed physics, and easy-to-learn gameplay show why this game has won so many awards in the past. The story line is also engaging, and you wonder what surprising new contraptions wait beyond the next portal.

However, it should be noted that while this game can lure you in quickly with its ease of play, the level of difficulty does eventually ramp up, with more and more Macrotons to collect and more and more pieces to finangle with. If you're looking for the sort of game where you can whip through a level quickly and move on, you might be daunted by some of the challenges beyond the first world.

On the flipside, however, it should be noted that there is more than one correct setup for solving most levels. In fact, it's occasionally possible to completely ignore some of the given tube segments and build a working solution without them. The KISS principle really comes into play here, especially when you realize some of the finer points of the game (for example, if you want to make a Macroton fall straight down, you can get away with not building a vertical chute leading it downward to its target about 90% of the time, thus saving a lot of straight tubing). So is this a flaw or a feature? That's all up to you. Some people might get a kick out of building the most efficient structure possible, some might feel a little wary about having a few parts leftover and look for a way to work them in. But there's no timer and no points system, meaning TubeTwist is exists for one reason alone: to have fun with.

I just have one request JIG, as a group.

Instead of having a "demo" tag could you please replace it with a "limited levels" or "limited time" tag. Please?

That may be a good idea.

So, we would indicate if the game is limited in time, or limited in the number of levels you can play, right?

You know... This game *is* available for Mac. It's compatible with 10.3 and up, so there's really no need to use Boot Camp or Parallels or Crossover Games for it, as well. The dev's site links to a demo download on Garage Games, and it can be bought there as well.

Generally the trend about demos seems to go to time limited instead of level limited, personally I don't like it, because it makes me rush, rush to try to see as much as possible from the demo to get a good buying decision (sometimes game look polished at first, but are pretty bad if you go deeper). And just imagine the horror your cellphone ringing while in the demo, and forget to turn it off? Boom! Demo gone for nothing.

About this game itself, it looks really nice and polished, seems to have made some additional effort like autoturning the tiles and so on. Music could be better, but otherwise seems to be quite an okay game.

This demo however, this is timelimited *AND* levellimited, I mean come on, decide for either one please, if not the second one. Does the next one a click and mouse move limit too?

A thing about the text above, "that should be noted". I know with my bad english I'm not in a position to belittle anyone, but "it should be noted" is not so good style, you see too often. Note that every sentence makes perfect sence without this injection, and since I see the sentence there written, I already know you think it should be noted, otherwise you wouldn't have written it there.

how about a walkthrough, level cheats, something, cause im stuck! even though i agree with you in everything else! awesome game (overall) 500 hours of fun overall