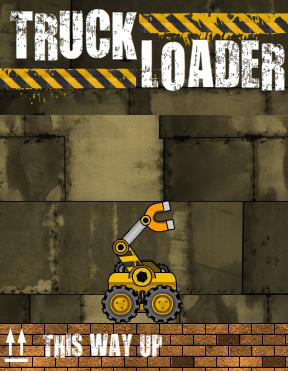 With graffiti on the walls, funky-fresh music and a grunchy-chic environment, you'd think that Truck Loader was trying a little too hard to be cool. Were this another shoot 'em up or platformer, I'd probably have dismissed it outright but Truck Loader is a refreshingly ghetto-looking stack 'em up physics puzzle game with a twist.

In this physics-based title from Flazm, players are put into the massive wheels of what the developers call an 'amazing magnetic forklift truck'. Frankly, it looks more like a little excavation robot fresh from a trip to the moon but that's just me. The objective of the game is simple: you'll have to move a variety of cargo containers into the waiting bowels of an even bigger truck. While this sounds almost pedestrian at first, the developers have done a great job at incorporating the usage of your vehicle's magnetic arm. The arm follows your mouse movements, and you can use it to push and pull items around the screen, or pick things up with your rather large magnet. While there's nothing particularly ground-breaking here, there's something absurdly fun about having to gingerly manipulate a series of boxes to ensure that everything is facing the right way up or snickering to yourself as you load a cracked box marked 'fragile' into the waiting truck.

Depending on how you look at things, the physics here may either make or break the game for you. In Truck Loader, things are extremely sensitive to motion. However, the same cannot be said about their response to magnetic forces. While it's entirely possible (and a lot of fun!) to throw boxes around, you'll occasionally find that the containers do not respond as intended and flop onto the ground instead of flying through the air. I would have liked to have a little bit more control over things but the occasional lapses do nothing to take away the joy of the experience. Truck Loader has about twenty levels in all. With the upbeat music and smooth transitions from one puzzle to another, it's entirely too easy to lose yourself in the moment and go, 'Hmm. Maybe, just one more level.'.

I really hate physics games where the primary difficulty of the game is fighting with the horrible physics engine. Four levels was enough for me.

Wow this is a terrible game! I kept at it for 9 levels in a sort of perverse fascination at how awful and unresponsive the controls were. Gave up on "Industrial Basketball" because there was no way the arm was going to obey my mouse wiggles enough to throw those boxes where they needed to go.

I also have to say that the physics wern't the best in this game. Kinda reminded me why I try to stay away from games that are based on the physics...they're usually not the greatest.

The elevator did in in for me. Way too slow.

I liked it. In fact, I actually beat it once, while I was waiting for my class to start.

It's kind of funny how odd the startovers happen. I once exploded due to the magnet got stuck underneath the elevator, due to a possible glitch.

The controls are a bit wobbly however. @[email protected]

I like physics games, but gave up on this one because the magnet control feels to unresponsive. Seems the magnet has a life of its own no matter how careful you are. Too bad, I liked the overall puzzle idea.

I definitely agree that the elevators are slow, and as a side note, I don't understand why you can hold your arm up to save yourself from elevators, but if they touch your body they crush you...
However, I didn't have any trouble throwing crates. I'm using a touchpad; maybe they're better for that sort of motion?

Aww I couldnt save the companion cube in the end :(

oh boy, this game is frustrating! on-screen controls like Walkthrough and Reset are activated on mouse release, so if you're not careful you can blow yourself up seconds before finishing a level, or get stuck under an elevator while the walkthrough steals focus in another window. the idea is neat, but the execution sucks.

Horribly stuck on 18. Just cannot get the second crate onto the button.

I enjoyed it except for level 21. I had to restart it about eleventy-twelve times before I could

. Up to then, and after then, I didn't have too much trouble manipulating the robot to do what I wanted.

I was actually fine with the physics, but there were major interface issues.
First, I could not operate the magnet while in arrow-induced motion. The magnet was also a little sluggish at points (and I think this is better labeled an "interface" issue than a "physics" one).
Then, click-dragging the magnet didn't release the crates when the mouse left the play area, and this usually meant I unclicked over a button inside the play area or a sponsor ad outside it and activated that instead. This persisted when I resized the window so the ads weren't visible.
Finally, it is impossible to improve one's score. The game doesn't store individual times, but instead adds any new time to a running total. This means if one improves the time on one level from 30 seconds to 26, the total time goes up by 26 seconds.
(A side issue is that the clock keeps running as the truck leaves, but at least that's consistent.)

I think I now know how one of the 12 bottles of caffeinated goodness we just ordered from the States leaked all over the place and lost most of its contents. This is a USPS training tool, isn't it? :-)

1,820 Views
0 Comments
chrpa— Jayisgames needs your help to continue providing quality content. Click for details Welcome to the Roundup 31 with three games! As mentioned in the previous roundups, only odd-numbered episodes are featured since even-numbered are for Robin Vencel's patrons. More...  ...