What's the world coming to when you can't even take a little nap without some blockold making off with your pants? It's exactly this sort of problem that sends Trouserheart out across the kingdoms to battle a diverse horde of peculiar adversaries to find and recover his kidnapped bottoms. Equiped at first with just a meager sword, wooden shield and heart-speckled boxershorts, Trouserheart hack'n'slashes his way through forests and dungeons, crossing bridges and deserts, defeating such foes as blockolds, tentacles, derp knights, jelly cubes, and wizards. While this is no Sunday walk in the park, the collaborative creativity of 10tons and Dicework Games made this RPG action adventure instantly accessible to casual players and gamers of all ilks. 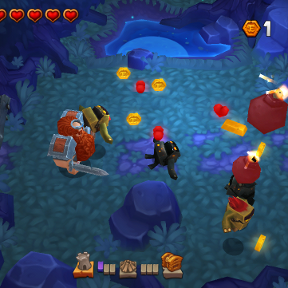 True to its promised accessibility, movement and gameplay in Trouserheart is intuitive: you can choose either buttons or floating controls, but either way, a few swipes and taps are all it takes to propel the protagonist forward or swing his sword. There are approximately 20 different areas to explore, each with various randomly generated stages filled with monsters and treasures to uncover.

As you defeat enemies or cut down bushes and chests, you'll collect coins to spend on upgrading the power of your sword, shield, armor and money pouch which will leave you better equipped to face the increasingly difficult enemies as you progress through later stages of the game map. For most players, this amounts to approximately 5 hours of gameplay; that varies by whether you plow on through heedlessly, or if you "grind your skills" early on, repeating areas until you've gained enough gold to max out every skill set. Conquering each castle or area usually means successfully progressing through a series of rooms, although you can at any time to pause and return to your own castle to rejuvenate or upgrade. 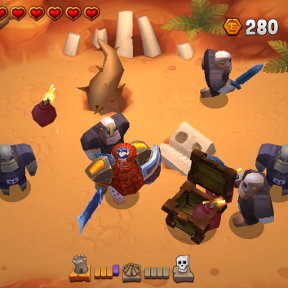 The limited options for upgrades means you won't be agonizing over which accessories to buy or which weapons path to follow yet that doesn't mean Trouserheart is bereft of strategy altogether. The randomly generated rooms turn up a number of puzzles to solve and you also need to take care how to best approach the various foes. Additionally, especially in the final showdown, combat will require some careful timing and attack styles. This is where some frustration comes in—despite or because of the simple controls, making lickety-split actions or precise maneuvers is just not possible. That wont be a problem in casual mode, though. If you choose to play hardcore, which means enemies deal twice as much damage while being less hurt by your hits, the last battles can be extremely difficult, even with all your stats maxed out. Additionally, as the combat intensifies and loot flies all over the screen, these action animations can cause lag or freezing on your device. Fortunately, the heart of this adventure is in the gratification of reaching the next stage and the charming humor that ensues along the way; serious gaming it is not. With richly-hued cartoon graphics, whimsical concept and a diverse array of characters, Trouserheart will entertain players of all ages and skill levels and it's sure to bring a smile in the end.