The wind sounds a lonely howl over the expansive fields of sunset-tinged grains, hemmed in by rocky foothills of the distant mountains and densely wooded areas. A heavy presence, hovering in the sky above, waits. So what can you do? Run! You have just twenty minutes—the rapture is here and you will be forcibly removed from your home. Otherwise known as TRIHAYWBFRFYH, this Connor Sherlock creation is both perfectly titled and inadequately described. Use [WASD] to move and your mouse to look around in a narrative adventure where the main objective seems centered on reaching various locations before you are raptured. Or, doing nothing besides running around in panic until you are raptured. Or, merely gazing at the breathtaking scenery and calmly wandering about until you are raptured. The point here being "until you are raptured." 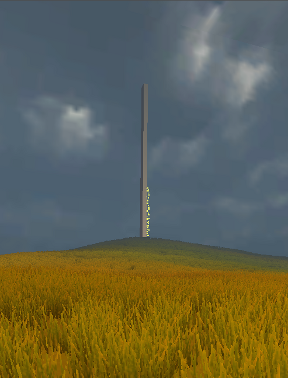 TRIHAYWBFRFYH is strong on atmosphere, and very immersive, although so much of it is just trudging through the vast landscape, trying to get from one spot to the next. That is both a source of frustration and potential boredom as well as an impetus for heightened tension and a growing need/want to know more. Yet curiosity is rewarded by discovery as you experience every piece of the characters' lives,with each voice actor wonderfully adept at turning familiar stories into their own personal narratives. As a result, the overall experience is more easily compared to an audio-visual book than an ordinary adventure game. That said, what you get out of it depends much on gameplay: how well you can find—and run to—each story point. Unfortunately, it's easy to succumb to impatience, as the difference between using [shift] to run and not using it is negligible, given the vastness of the terrain. It's also hard to decide whether this would be more enjoyable without so much time spent running about or whether those long spaces of searching punctuated by a tidbit of story are necessary to build a game structure as well as evoke mood.

TRIHAYWBFRFYH is very beautiful—both simple in its presentation yet complexly affecting. Here, Unity mechanics are utilized to their greatest advantage. Navigation and movements are comfortable and realistic enough to avoid the nausea inducing disorientation found in some Unity-based games. I say this as someone who usually shies from said games, being horribly prone to motion sickness. One of the reasons to play TRIHAYWBFRFYH is for its example of how Unity, in the right hands, can be used to create a gorgeous, multidimensional environment that is a pleasure to explore. Yet, some of the drawbacks are there as well, such as an initially long load time and the awkward takeover of your browser (use [esc] to regain your system cursor). Still, while short of actual realism, the graphics do what they're meant to do: evoke a sense of being. Rapture is probably a surreal experience, after all. Whatever it is, though, it will be especially appealing to players whose favorite part of a game is exploration. Or anyone looking for an artistic presentation of literature. Or those who love a beautiful atmosphere. The point is, it's worth a play.

The soundtrack for this game is available on Connor Sherlock's Bandcamp page.

The difference between a game like this and a game like Dear Esther is that I enjoyed wandering around the landscape in Dear Esther and could take my time meandering along without the slow pace detracting from the heavy atmosphere. Every bush or tree on a cliff looked like a person and I felt like I was being watched the whole time.

Not so much in this game though. I love the looming unidentified shape in the sky. Considering it's just a grey oval it is intensely menacing. I just wish there had been more of a path, there were times when I couldn't see where I could go next so I didn't enjoy running in circles. If there was a giant grey oval in the sky for real, I'd be running in a straight line. Forever.

I loved the voice acting and snippets of HP Lovecraft, but with my scatter brain and short attention span I couldn't mentally string together the pieces of story. It felt like I was doing 4 jigsaw puzzles at once and mixed up the pictures.

In spite of it's shortcomings I played it twice. Once you know what you're supposed to be doing (sort of) it's a lot smoother and more fun on the second play through. If only I didn't have to hold down run the whole time. My little finger hurts.

This is the message Unity gives me after it crashes while attempting to load the game.

If you are having trouble with the webplayer, try downloading the standalone version. There is a wider range of graphics options as well.

I got it to load on Firefox, but I am afraid that my cpu/ gpu is just too old to render it at any respectable framerate.

I'll try the standalone and let you know, but I don't have high hopes.

*shivers* that really creeped me out. I don't think I can finish it. Partially just because of what happens in the story I think it's based off of.

For those who know the story, is the end as horrible as I might expect?

@Troy, I'm not sure which story you're referring to but there is nothing horrible about the end of the game.

You start seeing stars float in front of your face for the last few minutes, they get brighter and brighter until it's an almost white screen and then the game ends.

I usually love atmospheric games, but this one just seemed to be lacking something.

I ran around to glowing pillars of light, through miles and miles of repetitive grassland, tried to find some trace of a story, and failed miserably. The game just seemed to pointless to me. Why was I going on? To see the scenery? To unravel a gripping story? Other games with no goal still have some driving force; seeing some amazing sight as you walk, or finding a new area. This game just lacked the drive for me, as there basically was nothing to explore for.

I'm not saying it's a bad game; some people will enjoy it. But it just didn't hit the mark for me... I quit the game before even half my time was up.

This is a very freaky game. I would have preferred to have listened to the call of Cthulhu on youtube rather than run around for 20 min from point to point. 3/5. I was really thinking there would be a Christian aspect to this one. Oh, well. On to the next game...

Am I mistaken, or is the "narrative" just reading verbatim from Lovecraft? I recognized what I'm pretty sure are word for word passages from "The Shunned House". Other bits I couldn't pin down as exactly, but the style was definitely there. I'm not sure a book on tape that you have to hold shift and hammer WASD to advance is breaking ground that needs broken. Even if the visual atmosphere is decent.

@Revvy, I guess you didn't play the game until the end. It tells you the names of the narrators and the Lovecraft stories they were each reading from.

This game is awesome, I love games (or interactive art) that are introspective and mysterious. :) The endless running gets a bit tiring and it can be hard to find the next pillar, but I think exploration and desperation are an important part of the game.

A hint for anyone who hasn't played it yet:

Each color of light pillar has a different story line and effect, so you would have to play through four times to get the full experience. (I'm not suggesting you do this- even though I did :P- because it would take at least an hour and twenty minutes combined.) You can hit multiple colors if you want, but each color has it's own story and they wouldn't make sense together.

Dandy: Thanks for clarifying.

I happened to run into the opening passage from "Color Out of Space" as my first audio cue, so I assumed the gray blob in the sky was the Color and it was going to do whatever the Color does.

Fantastic. I played through all four, and I found

The Call of Cthulhu

the easiest to get through (leaving me wandering around for a while at the end), and

The Color out of Space

to be very difficult to get through, because of all the freaking trees blocking my view. My favorite part by far was

How the landscape changed in initially subtle, but eventually massive, disturbing ways based on the story you chose.

Overall, a great experience, although I would have greatly preferred it if the shift key had toggled run/walk, so I wouldn't have had to hold it down constantly.

I felt the same way about the walk/run and I also would've liked toggling "run" to be easier and I wished "run" was much faster. I have mixed feelings about whether being able to move faster would actually be a benefit, though. At the same time I felt frustrated to be stuck in the trees or banging up against a rock I had to go around instead of climbing over, I secretly appreciated how that frustration added to the atmosphere. I'm a sucker for surreal and fantastical atmospheres in games.

When I first picked up this game, I stopped after 6 minutes to report back to JIG headquarters my initial impressions (which were mainly positive), then saying: "But I don't have time to finish this; I have other things I need to do today. Some other writer should look at this, though." Yet I couldn't help myself going right back in for another peek. I couldn't stop playing it. That's how I knew I wanted to review this game! I knew some people would be put off by it, for the various reasons mentioned already...but I knew others would love it, too. :)

This game is clearly underrated.

A great game, but I wish you could rebind keys. As a lefty, not being able to bind keys is a constant annoyance, especially with games that use WASD, space, and the mouse. With the mouse in my left hand, reaching all the proper keys with my right is incredibly awkward.

Also I wish there was a subtitles option. It would detract from the visual effect a little but I can barely understand some of the dialogue.