Tamas Games' Tricky Rick 2 is the sort of puzzle platformer that's practically built for bad puns. Using [WASD] or the [arrow] keys, you control a robot who has crash-landed on an alien world and must use his head to solve various puzzles and sometimes lose his head (literally) to knock out hostiles guards in order to sneak by. You can pick up or drop items by pressing the down key, and if you're carrying a weapon, you can use it with [K]. Most switches, from elevators to warpers, can be activated with the same keys, but some will need to be held down with something heavy. In each stage, your goal is to collect all the power icons so Tricky Rick can eventually power his S.O.S. signal and return home, but standing in your way are switches, shields, teleporters, angry robots, force fields, and more. Luckily for Tricky Rick, he has access to jet packs, giant hammers, ray guns, magnetized cannons... and his noggin'. If you do hurl his chrome dome, make sure to pick it up, since you can't complete a level without it! 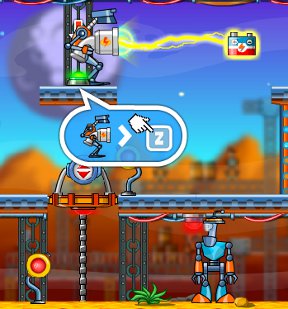 There's a lot to like about Tricky Rick 2, from its vibrant presentation and sense of quirky humour, to the piles of toys and mechanics it introduces for you to play with. In some ways, the game can feel more action oriented, since the path forward is typically clear, with the exception of an initial learning curve as you figure what constitutes barrier versus background. The problem is that the controls feel more than a little loose and floaty when it comes to running and jumping, and while I suppose you could be a supreme troll and say that a robot is expected to move clunkily (hurr hurr), for the rest of us it means that the game doesn't play quite as smoothly as it could or should, allowing you to get stuck on the edges of platforms or scenery. Throw in the frustration when you accidentally throw something fragile you meant to drop so you have to restart a stage, or the inability to remap keys, and you have a game that's definitely very good, just lacking in some optimisation to make it stellar. Tricky Rick 2 packs in a whole bunch of levels and creative design, making it more than worth a play.

Just me or WAY too many freaking keys to remember?
Why just have down to grab/drop stuff and space to use?

It's not just you. Controls are very non-intuitive.

I agree and it's a bit a shame as the mechanics and the graphics are good.
As Dora said we would like to remap the keys.