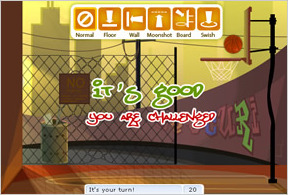 Trick Hoops is simple game of making hoop shots with a basketball. It is a multiplayer game that can be played one-on-one with a friend over the Web, and it's another shining star in the growing collection of creative and original games from Gamesheep.

A free and easy registration is all that's necessary to get up and running, as this allows you to password protect your user name so that no one else can log-in with it. Once logged on, create a new game or join one waiting for a second player.

One player selects a shot by clicking one or more of the buttons that describe the different types of shots possible, such as regular shot, off the wall, swish, off the back board, etc.

To attempt a shot: (1) move the ball with the mouse to position it, (2) click-drag the ball to select the direction and power of the shot, (3) release the mouse button.

Play continues until one person scores 3 points and wins the game.

Analysis: This game is a lot of fun and I found myself wanting to play over and over again. The physics are realistic enough for a game of this type and there are enough different shot combinations to keep the game play interesting. The mechanic is a simple one and won't take long to become familiar with how to do it. Perfecting shots, however, is another matter entirely and that's what makes this game so much fun. Kudos to the folks at Gamesheep for coming up with another great one-on-one Web game.

One word of advice: If you are the one being challenged, be sure to look in the upper right portion of the game window to see the type of shot you need to make. Also, watch the angle and power with which your opponent shoots the ball if he/she goes first, as you may have to repeat the same shot soon after.

I can't register at all, it says invalid birthdate.:( No matter what date I put.

Whoohoo!
Very entertaining game. Gets boring after awhile though.

Kirkpad: have you written the date as eg: 07 instead of 7?

Wow, I just made a Floor/Wall/Moon/Board/Swish.

Haha, my opponent must have crapped himself.

Thanks gifted weasel, I think that was it.

Secret tip: You can practice your shots ahead of time on the single player trick hoops: http://www.gamesheep.com/multi-player/mp-trick-hoops/practice.php

If you want to run out the shot clock each time, you can try to find the right landmarks on the background to line up your shot by... cheeeap!

I really like this game, but there's never enough people in the lobby, also, shouldn't Antony's tip be in a spoiler tag?

Thanks guys for posting such awesome games!!!

cool i can do a floor,moonshoot,wall,board!!! btw wat's a swish?

My only complaint is how it says "It's your opponet's turn."

Swish: Make a basket without hitting the rim of the hoop. You are allowed to hit the backboard.

I remember seeing this same game, w/o the multiplayer function from makai media... i think gamesheep must have either purchased or copied it from them...

they called it horse...