Ages ago, a mighty wizard built a castle to guard his secret treasures. Then... he vanished, leaving all that booty just sitting around. Monsters noticed the unguarded treasure, too, and started out to nab it. If only they knew of the force they would have to reckon with when they got there: your fingers. Treasure Swipe is a frantic mobile arcade game laced with unlockables and coated in a slick presentation worthy of your best touch screen device! 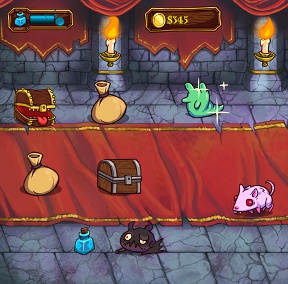 Each level contains ten waves where you'll fight with the bad guys to get to the loot first. Treasure are on the left, monsters come from the right. Swipe vertically on treasure chests to unlock them, dealing "damage" with each hit until the lid gives way. Bags are somewhat softer and require horizontal swipes. Enemies, on the other hand, have different personalities, speeds, and armor ratings, and you've got to stun or kill them so you can keep working on opening those chests. The problem is you don't have unlimited swiping power, an ability that slowly drains with each hit. So, by conserving moves and picking up blue potions as often as you can, you can hope to stay in the game wave after wave, just to get a chance to fight the big bad boss guy(s) at the end!

Piles of coins fall between waves in Treasure Swipe, and you get to collect and use them on upgrades in the shop. You'll quickly max out some of the stats, but figuring out which order to beef them up is a small part of the survival strategy. You'll need everything to be just right to face stronger waves, tougher chests, and bigger enemies. Boss battles are unique in that you aren't told what to do, you just have to start poking/swiping and hope you figure it out. You might lose a few times at first, but for some reason, you never mind.

Treasure Swipe has a lot of action, and there's a little bit of RPG-style upgrading to balance that out. It won't take you too long to slash your way through the major waves, but unlockable modes and equippable relics give you reason to keep plugging away until you master the game. It's frantic, riotous sorts of fun, without any in-app purchases or other gimmicks to ruin the experience. And it's one of the few iOS games that will make you sit up and play like you mean it!

Seriously frantic game, at least until you level up.

I'm not sure that the blue bar indicates the number of swipes. I think it's just a timer. It counts down even when you're not swiping.

I'm really having trouble clearing the first boss�I have no idea what I'm supposed to do. Any pointers?

Hey Isaac! Thanks for checking out the game!

The blue bar is a timer showing how much time ('time magic') you have left to stay in a level. It also functions like hp, so if enemies damage your chests you'll lose some time. Picking up blue potions from chests/sparkly enemies or upgrading your Time Magic in the store will give you a boost.

Here's some tips on the first boss nested between spoiler tags...

I hope that helps! Keep up the swiping tenacity!
- Pete @ Workinman