Treasure Seekers: Visions of Gold is another superb hidden object adventure game from Artogon Games, creator of The Mystery of the Crystal Portal. Both titles share a unique design among hidden object games where you are presented with contextual search clues instead of broad lists of objects. In essence, your goal is to explore the physical objects in each scene and collect items to solve individual puzzles. Combined with a charming story and great visuals, Treasure Seekers: Visions of Gold hits between two genres for a welcome hybrid gaming experience. 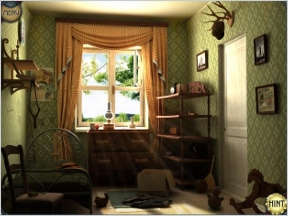 The story begins with a young girl telling of her dreams about life on a pirate ship. After a few short tutorial-style scenes she is joined by her brother, Tommy. Together they travel to uncover the family's secrets and discover hidden treasure. Not the most original of tales, but because the story is told from Emily's point of view, the sense of wonder and amazement is pushed to the charming position of center stage.

The game's unique interface utilizes clickable hotspots that reveal sets of objects that need to be found in order to solve a puzzle. For example, Emily wants to leave her room, but the door handle seems to be missing. Click where the handle would be and a set of round icons appear. With that menu open you can search the room to find the requested items, all of which make logical sense to solving the task at hand. Well, mostly logical. When you locate an item, simply select it and click on the menu to place it where it needs to go.

At any given time you may have several hotspots that you can work on completing, each with its own items to find. Sometimes you'll have to solve one of these puzzles in order to find an item for another. Check the row of icons at the bottom of the screen to see what's available and how many more puzzles you'll need to find/solve before completing the current scene. 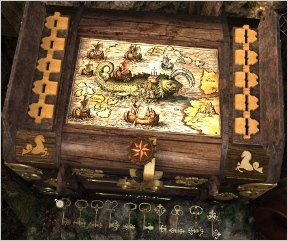 Analysis: Before I made the connection that both Treasure Seekers: Visions of Gold and The Mystery of the Crystal Portal were created by the same development team, I had already begun to notice similarities between the two titles. Both use the same basic hidden object/adventure structure that relies on container objects and localized puzzles. Both sprinkle minigames into the mix every so often, though the ones in this game are far superior to Crystal Portal's roster. Both games also have a great visual design that features a wide range of environments.

Most hidden object games penalize you for mis-clicks, but here you can tap the mouse button all you want without fear of reprimand. Sometimes this will help you out of a tight spot, other times it will merely fill the screen with little red X marks. The hint system is unlimited and regenerates every minute or so, giving you ample opportunity to play the game "right" and still have an enjoyable experience.

Good visuals, a charming story, and an interesting mechanic that takes some of the dry feeling out of the hidden object/adventure genre. Treasure Seekers: Visions of Gold is another high quality game that should not be missed.

I really like this hybrid style. It plays more like a logic game than just a hidden object game. I've felt the same about the other earlier games similar to this one, and I'm really familiar now with the animated 'incorrect' red X from these authors.

I have a feature request: Could you mention when games are download-only somewhere in the intro? It would help those of us reading through RSS.

I quickly get bored with hidden object games but I really like how this game is played with pictorial clues instead of a list and logic puzzles between each scene.

The animations and graphics are stunning and the story is progressed with lovely cut scenes that made me want to continue.
I also confess to playing 'fireworks' by scattering red X's all over the screen!

I like that I can try a demo of the game before committing to buying it, but I think it would be helpful to know how many levels there are.
There is nothing worse than playing for an hour, loving the game, buying the full version only to discover you had nearly finished it.

DU - I've just added the platform to the RSS feed. You will begin to see it show up in your reader on most of the new entries. Thanks for the feedback! :)

"I think it would be helpful to know how many levels there are."

I go by MB size. Over 100 MB is a good sized game. However, if there's a lot of video cut-scenes in the demo you can pretty much figure that the bulk of the size of the game is just video. I avoid buying those.

A really nice game! I enjoy when the objects that we are looking for actually makes a little sense, when the mess in a scene is somewhat plausible, not like looking for a safety pin in the desert or a tomato hidden in red drapes!

the game is pretty, but jeez could they ever use some decent writers.

I did the demo from BFG and was actually quite upset when i ran through my hour, used a $7 game credit to buy it, and found out approximately 35 minutes later that i was finished. If a game can be completely completed in under two hours, wow, that really sucks.

dani, you must have enjoyed playing the game enough to use a game credit after your hour was up amirite? so after paying $7 for a little under 2 hours entertainment, which you must have enjoyed enjoyed or you wouldnt have purchased it, ur saying that sucks? and yet people go to the movies and spend more than that for about as much entertainment. so what's wrong with this picture?

JIGuest, Dani was saying that the length of the game sucked. And I have to agree. As charming as the game is, you can get a good enough feel for the game after an hours demo. Don't bother buying the full game because there is little else.